Skip to content
Music / Features
They Made Me Do It -
Talking Influences with Peak Twins
Words by James Lynch
Friday 23rd August, 2019

Ahead of their album launch tomorrow, we caught up with melodramatic-pop masterminds Peak Twins to find out what inspired the masterfully illusive jangle-pop found on Beloved.
When Joel Carey and Liam Kenny moved to Melbourne at the beginning of the decade to get Peak Twins in front of more people, they arrived just as the local “dolewave” scene was growing legs - and naturally, they fit right in. Now nearly eight years on, many of their contemporaries from the time have either shifted their sights or folded, which meant that many were caught by surprise with the announcement of Peak Twins’ second album in May, after a number of years off. That said, just as the band dismiss nostalgia in their responses below, the new release refuses to be anchored by the past - instead, Beloved leans into classic sounds and older tendencies, yet reimagines them in a completely refreshing away.

From the get-go, Peak Twins show off a new level of assertiveness without shaking the striking emotion that flowed through their previous release. Recorded with an expanded lineup, the album finds Peak Twins toying with new instruments and textures to build soundscapes both intricate and elaborate, somehow managing to make things feel nuanced and grandiose at once.

This is immediately noticeable on ‘KIN’, with its expansive instrumentation and spaghetti-western influence, yet hits even harder as the album unfolds. With its sprawling layers and unhurried lilt, ‘Beloved’ is as cinematic as it is poignantly simple, and ‘Water’ finds Joel weaving his most wide-eyed melodies yet, as waves of violins sweep around us and the band chug along effortlessly. Later on, ‘Heaven Knows’ sucks us in with its euphoric pop smarts, hiding its doleful lyrics amongst the track’s immersive strings and undeniable hooks, and ‘The Less You Are’ feels almost eerie with its minor chords and warped effects, despite Joel’s warm vocals gleaming up front.

Finally, Beloved rounds out with the sedated ‘Maudlin’, a dose of woozy pop that lures us into a haze as the layers of keys and guitar swell around some Beach Boys-esque harmonies. However, where other bands would take the chance to make a grand statement on their closing track, Peak Twins masterfully avoid the urge to expand the track into something larger than it needs to. It’s these languid moments where Beloved succeeds most - its ability to feel spirited yet exhausted makes the album immensely compelling, as each amounting moment becomes more striking than the last.

To get a better insight into the album, we got in touch with the minds behind Peak Twins to find out what inspired the sounds we hear on Beloved.


Julee Cruise
In a way, Julee Cruise is the only Peak Twins influence. But we can pretend there are some others. Whenever I used to sing a song in my high voice, over Joel’s low voice, I was trying to sound like her. There’s no point trying to do things that are possible. Her voice is very high up, very pure, very unreal. See the live television version of 'Rockin’ Back Inside My Heart' for the uncut product.


Twin Peaks: The Return
The reunion season of the only good television show ever made is an essay on its own existence and an obliteration of nostalgia. Our music sounds nostalgic sometimes. If you ever find yourself enjoying that about it, turn it off. Nostalgia is conservative. Nostalgia is why there are cops on the borders.


Mach Hommy
Haitian-American New Jersey rapper-producer Mach-Hommy is the artist most responsible for getting me out of bed in the last couple of years. Multilingual avant-garde Haitian revolution street rap. He was associated with the Griselda folks but left them around the time they went off to work for middle-aged billionaire Eminem.


Nina Simone
Maybe the song 'Sinnerman', maybe any other song. I said above that Julee Cruise’s voice is pure and unreal. Nina Simone’s is hyperreal. It shatters all illusions and asks you to wake up. White supremacy never “resurges”, it never “returns”, it only re-reveals itself. The only thing that can fight power is power.

Major depressive disorder (MDD), also known simply as depression, is a mental disorder characterised by at least two weeks of low mood that is present across most situations. It is often accompanied by low self-esteem, loss of interest in normally enjoyable activities, low energy, and pain without a clear cause. 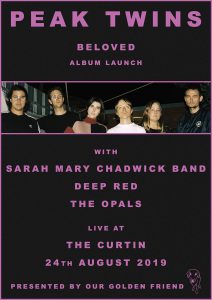 Listen to Beloved above, and catch Peak Twins launching the new album this Saturday, August 24th, at the Curtin.
peaktwins.bandcamp.com
Beloved Album Launch