Skip to content
Music / Premieres
Premiere:
Tess Guthrie - Fairy Lights
Words by James Lynch
Thursday 31st October, 2019
Melbourne indie-rocker Tess Guthrie is back with ‘Fairy Lights’, an intoxicating dose of slowburning alt-rock that contradicts its namesake, and instead, hits hard with its infuriated energy and striking emotion.
Following on from the release of debut single ‘WUTO’ in March, Tess Guthrie’s return has her challenging those who attempted to pigeon her as an indie-folk songstress. Instead, ’Fairy Lights’ is all forceful grooves, fuzzed-out riffs and Tess’ assertive performance.

Opening with a stomping beat, ‘Fairy Lights’ immediately picks up with a dark swagger while a thunderous guitar and bass combo tease us with a menacing lead riff. Tess’ enigmatic voice is quick to steal the spotlight though, weaving around the stark instrumentation as it slowly expands, the tension building as Tess holds us captivated with her striking lyrics. Where other songs in the genre might play up the sleazy atmosphere of the style, Tess masterfully plays with our expectations, as she criticises victim blaming while challenging the preconceptions of gendered violence. It’s a refreshing take, and as her voice erupts with emotion at the song’s conclusion, ‘Fairy Lights’ hits as powerfully as it does poignantly.

Speaking about the track, Tess shares “I’m so sick of seeing patriarchal attitudes and behaviours perpetuating and permitting violence and abuse across its full spectrum. It has been so normalised that survivors are made to believe that what has happened to them is their fault. It is never their fault. ‘Fairy Lights’ is about that.” 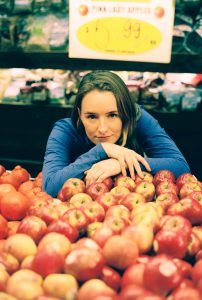 Listen to 'Fairy Lights' above, and head over to Facebook to find out where you can catch Tess Guthrie next.
tessguthrie.com
Tess Guthrie on Facebook
Photos by Tom Dunphy