Skip to content
Music / Features
Strange News - A Chat with Third Eye Stimuli
Words and interview by James Lynch
Friday 7th February, 2020
Sydney’s Third Eye Stimuli Records have spent the better part of the last five years slinging records from some of Australia’s most exciting and adventurous rock ’n’ rollers. With an obvious love of all things freaky and an admirable devotion to their local scene, it’s no surprise that their reputation has spread - and this weekend they’re bringing their gang of loveable weirdos down to Melbourne for Strange News Vol. 3, the third in a series of label showcases they’ve hosted over the past year.

We had a chat with Josh White, one of the masterminds behind the label, to find out what to expect from tomorrow night’s party - but before you get reading, pop on their inaugural Third Eye Stimuli compilation and journey down the rabbit hole with us.
TJ: Hey Josh, how’s it going? For an unacquainted, wanna tell us who Third Eye Stimuli are and what the label's all about?

TES: Hey James, going good hey. I’m currently laying on a bunk bed in The Northern at Byron Bay. The bed and room smells like a million ciggies have been smoked in it and probably many beers spilt on the carpet haha. But it’s a cool spot here, tonight we’ve got Joe Ghatt continuing his Aussie tour and supports from The Jim Mitchells, Mylee and The Milkshakes and The Oogars. Solid Byron contingency!

Third Eye Stimuli is myself and Rick Snowden. We started in 2016 when we first met Jim Mitchell and he showed us his first demos for Planet Absorbed. Ever since we were introduced to Burger Records in LA, we felt a need to create an Aussie label that would help build a solid community around all the sounds and bands that we love and admire. You could say that a lot of our bands are of a psychedelic nature but we don’t like to pin it to one sound.

You’ve mentioned in other interviews that the label was born to give your own projects a platform to be heard. While TES has obviously spread its wings a fair bit further recently, how important is the music community that birthed Third Eye Stimuli for you and the label?

Super important. Rick and I have been involved in the Sydney music scene for nearly 10 years now I think. We started our first band The Grease Arrestor back in 2010. I guess it was around the time we released our first album that we noticed how hard labels were to approach and just didn’t understand the industry. We felt very much removed and underground. Since those early days we’ve come to love and know so many bands in the same vein and that has inspired us to create our own community.

You’ve just released the inaugural Strange News compilation, which immediately reveals how far Third Eye Stimuli has expanded over the years, with acts from across Australia and around the world. Tell us how this compilation came together.

We’d been wanting to do a compilation like this for years but it always fell to the bottom of our priorities as new album or EP releases came up with bands. Finally we just took the time to make it happen and we’re stoked with the outcome. 20 songs from 20 great bands across Aus, to NZ and UK, and even Italy and Greece... over an hour of audio. Hopefully, it’s just the first of many to come.

Although the compilation has a pretty broad range of sound, it’s quite clear you gravitate towards acts that aren’t afraid to get a little weird. What is it about this kind of music that you find so special?

I guess we just dig artists who push the boundaries, who aren’t afraid to be themselves. Nobody likes carbon copies or safety in the creative realm. There’s plenty of nostalgic flavour, but also a strong sense of innovation and individuality.

This weekend is Strange News Vol. 3, the third in a series of venue takeovers/label showcases, and the first one in Melbourne. What have we missed from the previous events?

Plenty of beer, laughs and good sounds. Sydney was a riot. It’s been a hell of a lot of fun and it seems to get better each time, so plenty to look forward to. We can’t get enough of Joe Ghatt right now.

And any idea what we can expect to go down this time around?

More of what’s gone down so far, plus a dose of that Joe Ghatt groove and hypnotic energy from our boy, Jim Mitchell. There’ll be more Sydney goodness to experience from our Third Eye family with Noodle House and Mr Luke Spook cruising down. We’re also super keen catch Kosmetika and Foggy Notion, both of which have had nothing but rave reviews. Just all in all another devastatingly wild night like we had in Sydney.

What else is on the horizon for Third Eye Stimuli this year?

We’re aiming for plenty more vinyl releases, Strange News compilations, events and maybe tour some bands overseas to NZ or EU! Sunfruits debut EP will be out on Feb 11 on vinyl via ourselves and also Six Tonnes De Chair records in France. It’s an awesome EP and full of important messages of climate crisis and changing our ways. And looking like some new music from The Jim Mitchells finally... and some new releases with new artists also coming soon. Stay tuned and thanks to everyone for digging! 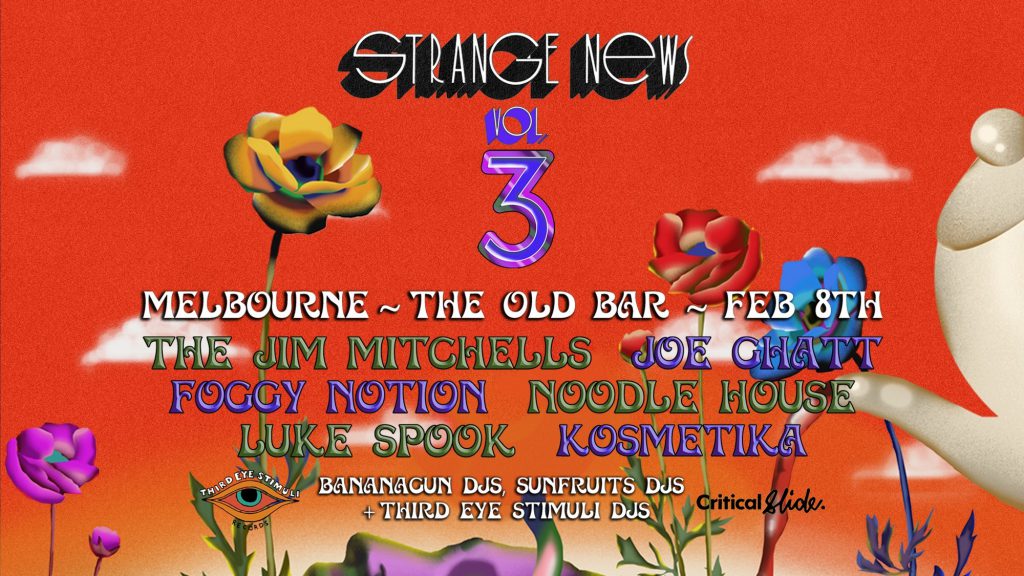