Skip to content
Music / Premieres
Video Premiere:
Harris - Sheena Is A Bush Doofer
Words by Joshua Hicks
Wednesday 13th May, 2020
Today we have the pleasure of premiering the sophomore single from Fan Girl frontman Harris - ‘Sheena Is A Bush Doofer’ is an enchanting indie-folk track that buries its beguiling heartache beneath Harris’ wit and wide-eyed charm.
‘Sheena Is A Bush Doofer’ is a lament to a relationship shook by the monotony of daily life, causing rifts between an electronic music festival goer and a guitar saddled singer-songwriter. From the lead singer of rock band Fan Girl, Harris is a remarkably unguarded project, featuring falsetto’d vocals, subtle synthesiser and a plethora of guitar layers. Produced by Sam Swain and performed alongside Vincent McIntyre and Dom Buckham - three names you’d recognise if you’ve kept an eye on Harris’ tight-knit musical community - at first, ‘Sheena is a Bush Doofer’ is a little more understated than some of the other sounds this crew makes.

However, the build is gradual and steady, from the sparse and intimate emergence of a guitar and Harris' tender vocals at the beginning, through to the cinematic upheaval of the final chorus. Although bristling with wit, the track maintains an unnerving edge, which makes playful phrases like “she’s doesn’t like songs that have guitars, so you’re not going to like this one” and “she moves to her own droning bass, and basically 'I have to go' she says” feel all the more tragic.

Alongside the track, Harris has released a wonderfully forlorn DIY music video. A solitary Harris struts around the room, plays air guitar, muses on a typewriter and professes confessions to a stationary camera, adding to the sense of supreme mania and despair. Although shot with an unmoving camera and backed by a blank wall, the combination of its simplicity, the VHS style footage and the raw confidence of Harris creates a hypnotic viewing experience - something that feels highly nostalgic but also ties into a deep sadness that comes from being left alone after a lover departs. 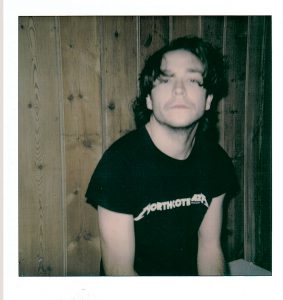 Check out the clip for 'Sheena is a Bush Doofer' above, and keep up to date with Harris by following him below.
Harris on Facebook
@mrnoahharris
Photo by Luke Thomas