Skip to content
Music / Premieres
Video Premiere:
Goldminds - The Spirit Knows
Words by Jarrah Saunders
Wednesday 10th June, 2020
Dust off your leather jackets and slide into your black skinny jeans, because today we’re stoked to be premiering the chaotic new video clip from Melbourne four-piece Goldminds for their badass garage-rock stomper ‘The Spirit Knows’.
Since bursting onto the scene with last August’s single ‘Anxiety’, Goldminds have been busy - they’ve developed a reputation for raucous live shows, gigging their way around some of the city’s favourite venues, from The Tote to the infamous 2am slot at Yah Yah’s.

In the absence of live music, the new video for ‘The Spirit Knows’ makes it that little bit easier to imagine how their shows go down. A jerky hand-held camera captures the band performing live in a dark room - all leather jackets, long hair and effortless cool. It’s the perfect visual accompaniment to the single, which was itself recorded live in St Kilda’s Hothouse studio by Jez Giddings.

Listening to this single, you’d be forgiven for thinking that Goldminds had been playing together for years - so strong is their musicianship and well-defined their sound, it’s hard to believe that they’ve only been around for 12 months. The track opens on a chugging electric guitar riff and rolling toms before a snare cracks through the mix, triggering the all-out sonic assault of the full band who enter the fray with the weight of a juggernaut and the swagger of a seventies antihero strutting away from an explosion. The relentless energy and unbridled excitement are undoubtedly enhanced by in-demand producer Michael Badger, whose tastefully distorted mix aesthetic you may recognise from some of Amyl and the Sniffers’ recent material and most of King Gizzard and the Lizard Wizard’s heavier output.

At the wheel, Courtney Constantinou’s vocals ooze confidence - she sings with a breathy whisper which effortlessly commands great power in a way not dissimilar to the acclaimed pipes of rock ’n’ roll royalty Alison Mosshart (The Kills, The Dead Weather). The songwriting process, it seems, was just as effortless - “the song ended up writing itself in many ways... it came to us in the one sitting and the lyrics just flowed out.”

According to Constantinou, the song was inspired by a visit with bandmate Brendan West to the Three Sisters, a landmark in the Blue Mountains sacred to the land’s traditional owners the Gundungurra. “On reflection and in our current state, the song seems more relevant than ever. It’s like a message to step up and do better as an individual and as a collective. To acknowledge, respect and listen to our Indigenous ancestors. To honour the natural spirit of this land, our Mother Earth. To come together and to heal...” 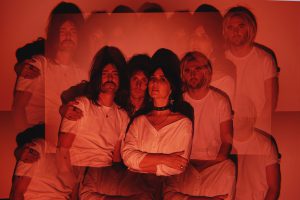 Goldminds’ debut album Signals is set to be released later this year - until then, keep up to date by following the band on their socials.
goldmindsband.bandcamp.com
@goldmindsband
Clip by Simon Atkinson
Photos by Kalindy Williams