Skip to content
Music / Features
Our Two Skins - A Chat with Gordi
Words by Josh Hicks
Thursday 26th June, 2020
Gordi has just released her sophomore record Our Two Skins, a shedding of armour in an exposed examination of identity, purpose and love. We had the pleasure of speaking to Gordi about the record, her past several years as a musician, and her words of wisdom for emerging artists.
Gordi has had a whirlwind of a past half-decade, as a young artist performing with the likes of Bon Iver, The Tallest Man on Earth and Julien Baker, releasing a highly exclaimed record Reservoir, all while obtaining a medical degree. The mind behind Gordi, Sophie Payten, has dedicated herself to her craft, both as a songwriter and musician, and it has allowed her to carve out a place for herself in the music sphere. Anchored by her remarkable vocal range, her unique sound is characterised by rows of harmonies to create a signature ocean of sound, and has continued to expand with alongside instrument choices, from keys and guitars to accordions and vocal effects.

The latest album from Gordi Our Two Skins was born at a critical moment in Sophie’s life - a period of transition, both in circumstances and in personal identity. From touring extensively throughout 2018-2019, Sophie decided to record the album back in her small hometown of Canowindra, New South Wales, with the help of producers, engineers and friends Chris Messina and Zach Hanson, in a spare cottage in the back of her parents family home. The situational beauty is one of the most alluring elements of the record. It just could not have been replicated in a studio, but at the same time is anything but a sparse, unrefined collection of tracks.

The record begins with the sound of footsteps scraping the floor, a door shutting, before a deep exhale from Sophie and the rich resonance of the piano is introduced. Sophie’s voice is uncharacteristically wounded and raw, adding tremendous weight to lyrics such as “I can’t get my shit together, in this aeroplane bathroom I’m wondering why I haven’t seen myself before”. The vulnerable admission sets up the rest of the album as it builds in layers. We’re immediately hit by a robust wall of vocals as ‘Unready’ begins. In stark contrast to the opener, ‘Unready’ is the powerful synth-pop track that we’ve come to expect from Gordi.
‘Sandwiches’ is another change in feeling, with a guitar driven indie-rock vibe. ‘Volcanic’ and ‘Radiator’ has Gordi open up about mental health, and coming to terms with a part of her identity which she worried would not align with all her families beliefs. ‘Extraordinary Life’ is a love letter about the commitment to wanting to give another the world, whereas ‘Hate the World’ is a declaration of strength, an internal decision to persevere in the face of adversity, and not turn trauma into hatred. ‘Look Like You’ brings us back to the solitary vocals and piano of ‘Aeroplane Bathroom’ as Gordi acknowledges her identity and the way other people see her. On the closing track ‘Free Association’ a lamenting fanfare brings the record to a end, with the final seconds hearing footsteps and a door close, in just the same way it began.


We had the privilege of discussing the new record and the past few year with Sophie. Our conversation began with Sophie opening up about her experience writing and recording the album back in her home town, with a population smaller than many of the shows she’s played.

“I spent the better part of three to five years touring and being overseas… being away from home a lot. In 2018, I spent a lot of time on tour with this artist named Sean Carey and two of the guys in his touring party were Chris Messina and Zach Hanson who I became really good mates with. And at the end of the tour they were like ‘we’ve been hearing you writing these songs. If you want to make a record, we’d love to be part of that.’ I thought about it for a bit, went away and wrote some more songs and then got back and was like ‘I think that’d be great if we could all make this record.’ And I kind of assumed we’d make it in their studio that they work out of in Wisconsin, but it was going to be closed down for all of 2019. So we were brainstorming where we would make it.

A few things happened in my life, like my grandmother passed away and I grew up right next door to her in Canowindra and so I sort of had this pull to go back there. I was working all of 2019 and had very limited time to make the record so I kind of didn’t want to be flying half-way around the world and dealing with jetlag while trying to make an album. So I asked my parents whether I could make the record in one of the spare old cottages out back. I spoke to the other guys, Chris and Zach, and a few months later they brought over 13 massive road cases of gear… and set up in this little cottage. And it was great. I don’t know that I’ll ever have an experience like that again. I cared a lot more about the feeling of the record and the feeling we had when we ended and the feeling of the way it was played rather that the technical prowess. In order to achieve that we really couldn’t have done it any other way.”

After laughing about how that must’ve felt like being a teenager again, and asking her parents if she could invite a few friends over for it to turn into a full blown house party, the conversation shifts to the new record. We discuss the origin of my favourite track on Our Two Skins, ’Aeroplane Bathroom’.

“I was at a pretty turbulent time in my life. I’d finished studying medicine and I’d put out my first record and I’d come out of a long-term relationship and then sort-of started a new one. I’d had this really adrenaline soaked four to six weeks and following that I got on a plane to fly to Europe to do a two month tour where I was going to be largely on my own. And I was sitting in the window seat of this aeroplane and I just sorta felt like all that adrenaline that I’d been living off for a month just go away and I was just sort of filled with total panic. I’m not usually a nervous flyer but I think there was a lot of things I’d been avoiding thinking about and when you’re on a long-haul flight there is literally no escape.

I felt the panic get on top of me so I started writing whatever was coming out. It was kind of the only thing helping me to calm down… I thought maybe I’ll be able to calm myself down if I go into the bathroom and gather myself for a minute, splash some water on my face… those horrible florescent lights came on and you look at yourself and you look 100… I was looking at myself and having all these very fundamental questions of ‘who am I?’ and ‘what am I doing?’ and ‘what am I thinking?’ and ‘where is my life going?’ The song sort of tries to capture the panic I was feeling at that time.” 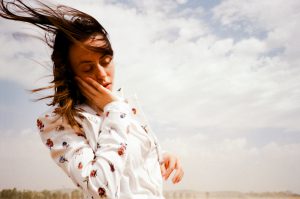 Like ‘Aeroplane Bathroom’, it turns out that a lot of Sophie’s songs emerge with some sort of catalyst.

“Most of my songs off this record were like that. I think that approach will probably change as I get older and I’m not as beholden to my emotions. But being in your early twenties and going through a lot of life changes and relationships, I would totally succumb to all of those kind of feelings and the only way that I feel I can really get out of it is by writing about it. It’s like making it into a song removes the experience from you a little bit and you can hold it at arm’s length and look at it and analyse it as an object. It makes me feel like I have a bit more control over what I’m feeling than perhaps I actually do."

Moving away from the new record, we begin to discuss her phenomenal collaborations and support slots - Iin the past few years, she’s worked with the likes of Bon Iver, The Tallest Man on Earth, Julien Baker and more. We discuss whether she feels like she’s now part or that community, or whether she could ever get used to that.

“Most of the time I feel like more like a fraud than part of it but probably everyone feels that way. I remember being at Eaux Claires festival hosted by Justin (Vernon)… I was looking around and just being like ‘I feel like this is a mistake.’ I’m not trying to be totally self-deprecating but I think there is something to be said with imposter syndrome and I don’t know if that ever totally goes away. But when I look back on the last five years, the things that I’m like ‘wow that’s really awesome’ are things like singing with Bon Iver on the Jimmy Fallon Show or singing one of the new songs with The National or jamming with Julien Baker in the middle of woods in Wisconsin in front of 1000 people. That stuff is what I’ll definitely look back on and think ‘wow, those are really the highlights of my career and life.’”

As the interview comes to a close I asked Sophie whether she has any advice or words of wisdom for young artists who are looking for their place in the industry. The fairly innocuous question prompted a pause from Sophie, the first time during the interview, and it was evident that she truly wanted to consider her response before giving it.

“As far as career trajectories go, I used to hate it when people would say this to me, but it really just comes down to the song. You need to be spending 90% of your time just honing your craft and honing the song, and the rest usually will follow. I think what a lot of people early on in their careers maybe don’t think about as often as they could is their positioning, like when someone thinks about me as an artist, what do I want them to think of? What are the five words that I want to come to their mind?

And for me, early on when I was thinking that I wanted to be positioned with these kinds of artists, and be seen as a collaborator and those sort of things. I pinpointed a few artists that I love… and thought ‘how do I access that? And how do I let that help my career grow?’ Looking at artists who are a bit further ahead of you and think ‘that’s the kind of career I want to have’ and going back through their story and seeing what steps they took to get there and everyone’s journey is going be different, but I think that’s a really useful place to start.”
Gordi's new album Our Two Skins is out now - stream it here.
gordi.bandcamp.com
Gordi on Facebook
Photos by Jess Gleeson