Skip to content
Music / Features
Track by Track:
Millenium Cowboy - MC-MOOD
Words by Matt Thorley
Friday 14th August, 2020
During this strange time, there’s a couple of things that have emerged as universally prominent remedies - one being music and the other meditation. On her debut album as Millenium Cowboy, creative workhorse Harriet Fraser-Barbour presents a beautiful marriage of both.

Across MC-MOOD, the Adelaide-based musician offers five moody synth-led ambient pop pieces, created over five days. Each one made within a 24 hour window, opening the glass and revealing a peaceful, eerie and relatable snapshot of her time in lockdown.
People tend to find solace in shared experience and connection through relatable hardship. A concept that has been exploited by millions of companies starting advertisements with “this is a strange time for us all… now buy our thing”. Within an isolated world, the inundation of cyber communication, branding and wellness preaching slowly feels less and less authentic. Unsurprisingly, a lack of human contact makes it somewhat difficult to engage with the surrounding world - always aware of the greater scale problems but often missing the individual experiences of those around us. As such, it’s easy to feel lost and alone.

On MC-MOOD, Millenium Cowboy explores her own existence through dreamy soundscape vignettes. Equally as capable in allowing for a cloudy sedated escape as a place to pause and look within, the album serves as a definitive time capsule that offers a refreshingly intimate and comforting insight into our collective experience.

A number of quarantine-core albums have been recorded in response to this strange new world. Charli XCX’s How I’m Feeling Now and Chromeo’s Quarantine Casanova have translated playful personal stories into dance away the pain style records. But Millennium Cowboy’s sparse, ethereal and almost alien soundscapes don’t necessarily detail a personal account, rather they establish an atmosphere. They present a mood and a feeling. Embracing the emptiness of time without freedom and creating a quiet place to meditate on it all - whether it be hazy despair filled looping on ‘The Colours’, glittery hopeful arpeggios on ‘10 Days’ or the cloudy pads of ‘Unthinking’ that yearn for another time.

These soundscapes are carried by rich texturing and hazy vocal performances in which the lyrics are buried and hard to decipher, often utilising intriguing distortion akin to vapourware styled production or the work of Oneohtrix Point Never. As a result, whilst Harriet’s world and feelings are bursting through the mix, the universe she’s crafted is malleable enough to immerse your own life into.

Throughout MC-MOOD the production evokes the glitchy ambience of Kid A and the downtempo tranquility of Julliana Barwick’s work. An album highlight is ‘Wilson Tanner’, a track which tosses and turns patiently for over nine minutes, its airy effects and gentle keys creating a surrealistic pillow to rest upon. Constantly floating and whirling gently like a tired tornado, the soundscape unfolds into a longing improvisational journey, one that seems to be slowly dragging the world along with it.

The project's vocals are utilised as yet another entrancing element of the album's euphony. On ‘Unthinking Master’, Millennium Cowboy follows the likes of angelic songstresses Julee Cruise and Enya with calming words rising through the haze, like sun sliding through gaps in a grey sky. Elsewhere the lyrics are mixed and distorted, creating a distant uncanny valley feeling. An effect that shares vague similarities (or is similarly vague) to the oddly soothing work of contemporary experimental pop artists Bladee and Katie Dey. In doing so personifying the feeling of isolation and disconnect from the rest of the world. Strangely sounding both unfamiliar and incredibly human through its fractured fragility.

On MC-MOOD, Millennium Cowboy has masterfully created a space for honest guided meditation - with breaks for introspection, plenty of room to reflect on the state of the world and soundscapes dense enough to help forget about it all and lose yourself within. Moments induce hope, moments induce dread, moments induce sadness, joy and regret. A perfect manifestation of what five days inside the mind of a person in lockdown might sound like.

We had a chat with Harriet and she was able to offer some interesting insight into the creation of each of the album's tracks. 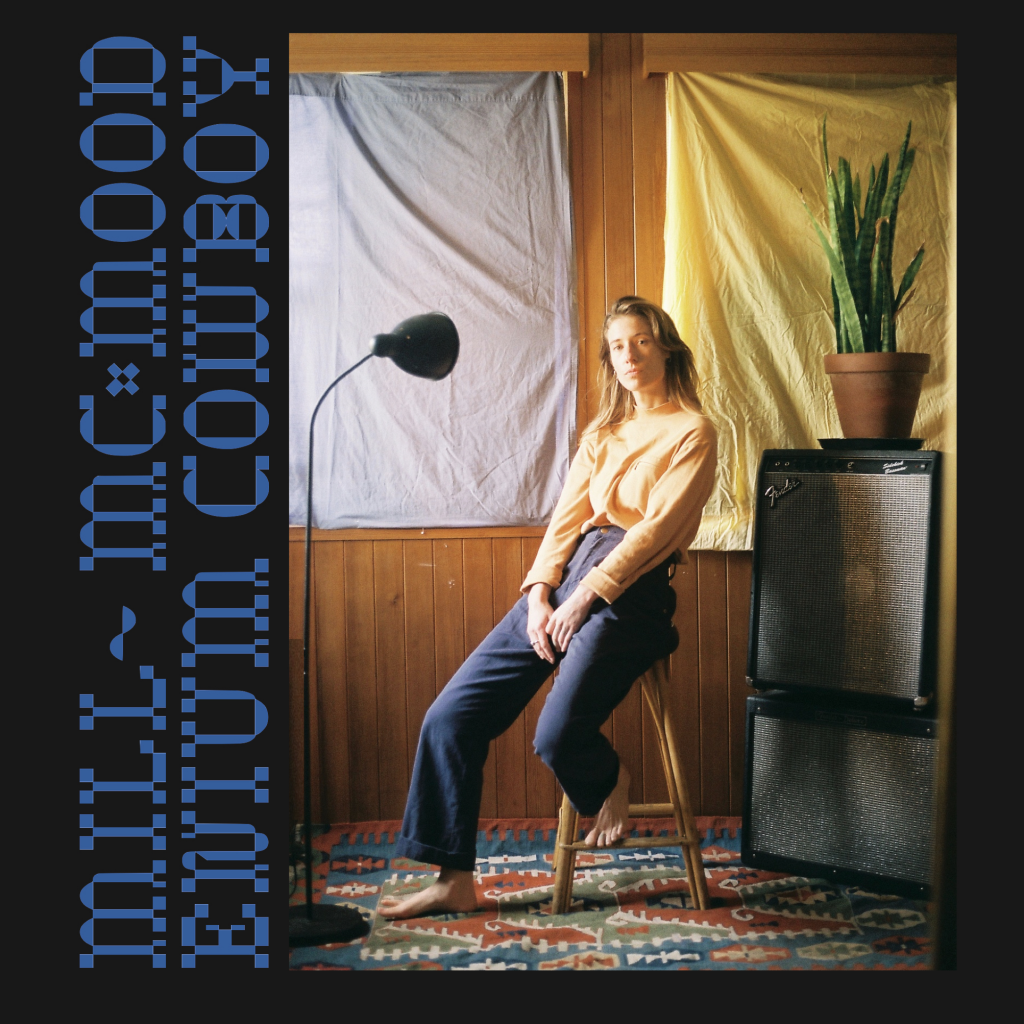 Harriet Fraser-Barbour: The album MC-MOOD was created in five days, each song a snapshot written and recorded within the space of 24 hours. Covid-19 restrictions had just begun taking place in Adelaide and thus was born MC-MOOD - into a state of manic restlessness.

The first song, ‘The Colours’, is a kind of homage to Daniel Johnston’s song ‘Some Things Last a Long Time’. When I first started experimenting with the synth, it was a way for me to fulfil this compulsion to deconstruct and reconstruct songs over and over again until they become nearly unrecognisable. I think ‘covers’ is almost a dirty word! Maybe buskers contribute to this idea I have of covers being like, amateurish or shameful or something. But I find myself stuck in these almost OCD-like loops of fixation on a particular song or even one tiny part of a song - I want to pick it apart and see how it came to be. Sometimes it’s a simple line or a melody that almost goes unnoticed in its original context but really resonates and inspires me, and I sit with that and meditate on it until it takes a new shape.

All of the songs on this album started with a simple synth line - whatever came out on the day at the time. I wasn’t sleeping well, and this electronic setup allowed me to make music late at night without disturbing my housemates. There’s something spooky about making music alone at night - I put a red light in my room which was maybe not a good idea because it made me feel even crazier... I remember feeling the urge to go out clubbing, really uncharacteristic of me - indicative of some kind of mania. The lyrics are a typical existential crisis in full swing.

I am an unthinking philosopher,
I am a philosopher with feeling,
I am the one who,
Dies when she is not,
Loved,
I understand the truth,
For I feel.

This is actually a continuation of the next song, 'Wilson Tanner', which I made the day before this one. The tracks aren’t listed in chronological order - but the dates are listed on the album art. 'Wilson Tanner' is a six day marker, '10 Days' is obviously four days later. I was counting down the days not of Covid lockdown, but of hurty heart, like the tally scratchings on a wall. Knowing that it would feel easier in time and feeling impatient for that time to pass. On this particular night I was drinking red wine from a can, eating chips for dinner and feeling a strange sense of freedom?

‘When you bailed from the show,
I sent myself flowers,
Now they wilt on my sill,
It’s been 6 days since then.

It's funny how time,
Can feel like the end,
Sometimes it’s so hard,
It’s been 10 days since then.’

I think this is the first song I recorded on the album. The title is an overt reference to the electronic duo of the same name that I had been listening to a lot (I’m not very cryptic or subtle with these references). At this stage I had no notion or intention to create an album - it was simply a way for me to meditate and find calm. The warbly warmth of a synthesiser has a definite kind of cathartic, healing vibrational resonance.

‘When you bailed from the show,
I sent myself flowers.
Now they wilt on my sill,
It’s been 6 days since then.

That it say that it still hurts,
Which is to say - that it’s still her.’

This little improv number is again a not so subtle reference to a very specific and overt source of inspiration. Specifically - the arpeggiators in Weyes Bloods song ‘Movies!’ She’s a master of epic crescendos and emotional movements that feel like montages, sometimes erring on melodrama but never crass? Does that word suit, I’m not sure. This track was made in like 20 minutes, it doesn’t come close to or even touch the surface of its namesake but simply an experiment in progressions and recording methods. I don’t know how to use computer stuff so electronic music can be challenging for me. I don’t have midi-capabilities, everything is analogue - analogue delays on synth manipulated in live time, arpeggiator tempo just set to whatever sounds good and then live overdubs that ALMOST sync up. This contributes to my impatience and explains why I don’t often want to work on anything for longer than a day. I just stop and say ‘it’s finished’.
MC-MOOD is out today via Magnetic Dreams - head to Bandcamp to purchase the album on limited baby blue cassette.
milleniumcowboy.bandcamp.com
@magnticdreams.tapes