Skip to content
Music / Premieres
Premiere:
The Crane District - Autumn Eyes
Words by Jacob McCormack
Thursday 20th August, 2020
Today we’re delighted to be premiering the new single from The Crane District - a conglomeration of crooning vocalism, soothing percussion and free-flowing instrumentation, ‘Autumn Eyes’ will boost your spirits and have you pendulating back and forth as it worms its way into your brain.
After fronting indie-rock band MF Jones for the better part of the last decade, Angelo Rosas-Ortiz has stepped out on his own with The Crane District, adopting a more subtle pop-based sound of equal listening interest. Released three months ago, his first single ‘Thailand’ screamed of wanderlust and nostalgia with its uplifting melodies and sunny harmony, and now a quarter of a year later, he’s back with ‘Autumn Eyes’ to sooth and inspire us again with his velvety voice and enthralling storytelling. Beneath the floating vocal layers, there’s a distinct percussive element that gives the track a calming sense of motion, alongside the blend of fluid chords and sturdy bass that reminds us of brighter times.

Following on from the wistful ‘Thailand’, ‘Autumn Eyes’ finds Angelo continuing to embrace his anecdotal songwriting style, this time depicting a lover bored and lonely dreaming of the romance he could have. The evocative lyricism creates solace for all those who have traversed a form of love that might just not be viable for whatever reason, while still recognising the passion felt for that other person. It’s an alluring sentiment that echos throughout the track - one that is only heightened by the effortlessness of the instrumentation - allowing ‘Autumn Eyes’ to wash over us in a glorious way, no matter the season. 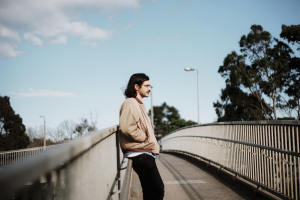