Skip to content
Music / Premieres
Premiere:
Muma Ganoush - Early Light
Words by Bree Garland
Thursday 15th October, 2020
Ahead of the release of their debut album The Big Beam next month through Marthouse Records, slacker-pop group Muma Ganoush have decided to guide us through a reminiscent journey of the daily grind with their latest single ‘Early Light’.
Despite all three members being prominent faces amongst Melbourne’s music scene, hailing from such acts as Zoe Fox and The Rocket Clocks, Gena Rose Bruce and Easy Browns, it was only last year that Shelby Wilton finally embraced front-person duty and established Muma Ganoush. The trio’s eight-track debut LP The Big Beam, set to be released next month, includes not only the mesmerising radiance from their previous projects, but a feel-good buoyancy as Shelby gives us an insight into some of the oddball experiences she’s encountered.

A dose of spirited garage-pop, ‘Early Light’ is a thrilling second taste of what’s to come from Muma Ganoush. After atmospheric guitar and light and tangy percussion glides the song into a woozy dreamstate, Shelby’s delicate yet charismatic vocals tell the tale of a never ending cycle of “late nights and early mornings”.

As the track progresses, it hurtles frantically from a soft dawn to the chaos of night. Synths move from a spacious hover to an oscillating scatter, recreating the feeling of hanging up the hospo apron in the afternoon before plugging in the amp and riding the lightning on stage. Shelby describes the track as encompassing her experiences “hauling ass as an early morning hospitality worker and late night rock and roll legend trying to make ends meet”. 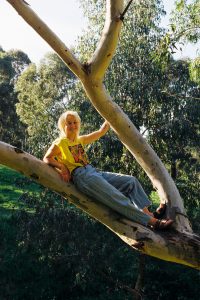 The Big Beam is out on November 13th through Marthouse Records - head to mumaganoush.bandcamp.com to pre-order the album on limited glitter cassette.
Muma Ganoush on Facebook
@muma_ganoush
Photos by Ivy Emily Trim