Skip to content
Music / Features
They Made Me Do It -
Talking Influences with Hannah Kate
Words by Madison Woods
Thursday 12th November, 2020
Following the release of ‘Sunday Mourning’, we caught up with the illustrious Hannah Kate to dig into the inspirations behind her latest dose of melancholic and disorientating garage-pop.
For an act that’s pretty accustomed to keeping busy - over the past few years they’ve dropped single after single, performed at St Kilda Fest and supported the likes of Ali Barter and Lime Cordiale - it makes sense that Hannah Kate’s creative flow hasn’t completely stopped during lockdown. Last month, the solo project-turned-full band shared the third single from their forthcoming debut full-length ‘Sunday Mourning’, and although the track has arrived just as our moods have started to lift, it plays as a pretty apt summary of the year; Hannah and the band knowing how to perfectly capture and reimagine those dull emotions we might know a little too well now.

Yet, with its weary vocals and hazy atmospherics, it’s quite fitting for the current state of things - a song to accompany a walk through some lush greenery, or even a long self-care bath. Anchored by some relatable subject matter - of feeing downbeat, uninspired and unable to be “good at life” - the track blossoms open around Hannah’s warming songwriting prowess. Her passionate vocals blur effortlessly with the dreamy guitars, and rounded out with a spoken word section in the middle, there’s an intimate sense of comfort amidst the gloominess. It’s the right kind of track to let wash over you completely - perhaps while lying on the floor - because as the slow and steady rhythms spiral around, you’ll feel lethargic and giddy at the same time.

The music video accompanying the track is equally as intriguing and mysterious. Directed by Mickey Mason, it follows Hannah as she completes daily tasks amongst an array of weird and wonderful creatures - featuring haunting scenes of clowns, ghosts and even cereal with eyeballs and fingers inside it, the music video is a pleasantly gory visual accompaniment to the track.

To invite us into her captivating and vulnerable world, Hannah has shared some of the key inspirations behind the ghostly sounds of ‘Sunday Mourning’.


‘Seneca Falls’ - The Distillers
Sing Sing Death House is probably one of my favourite albums of all time. Brody Dalle is such a badass. I love her “I don’t give a shit” attitude, while also obviously giving a LOT of a shit. I mean, that’s how I interpret it anyway. I feel like that’s the way I come across sometimes too - “unapologetic and vulnerable all at once” is how the folk at Deafen County described my latest single, which I love because I feel like it sums up our single ‘Sunday Mourning’ and me at the same time. I love the raucous and messy guitars in ‘Seneca Falls’ (and the whole album really) but it sounds really tight at the same time. Brody Dalle’s vocals are full of aggression and grit, but she also produces these strong pop hooks throughout the album, there’s a self assured confidence to her vocal delivery which I try to channel when I sing live.


‘Unfucktheworld’ - Angel Olsen
It’s no secret that this is one of my all time favourite songs, I think it’s been my most played song on Spotify for three years in a row, and we did a cover of it at most of our shows for about a year. The simplicity of it is really beautiful, I take a lot of inspiration from Angel Olsen’s lyricism and her vocal delivery, there’s an honest vulnerability to it. Every time I listen to ‘Unfucktheworld’ I feel the exact same way, it’s not one of those songs that changes over time for me, I get shivers every DAMN time, and it ~moves me~ ya know? I think ultimately that’s all I really want for my own music, just for someone to feel something when they listen to it. Shivers = plus 10 points, shed a tear, fuck I’ve bloody done it!


‘Blue From the Dark’ - DRINKS
I really love this song by DRINKS, it’s cute and soft, spontaneous and intelligent. DRINKS is the project of Cate Le Bon and Tim Presley of White Fence, they work so well together as a duo, their voices complement each other and it seems like they both have a lot of wacky off-kilter ideas. I really love this track, it reminds me a bit of ‘A Symphony Pathetique’ by A Winged Victory for the Sullen, but more condensed, pop influenced and at times chaotic. I think about it a lot when we’re in that phase of recording when we’re trying out random pedals and instruments, adding lots of different bits and pieces and getting silly with it. I really like it when I hear something in a song and I can’t tell what it is, and that happens a lot when listening to DRINKS. This song sounds a bit like a twisted music box, with all sorts of kooky sounds coming in and out. It feels a bit like an early morning dream, you’re drifting in and out of consciousness, unsure of what’s real and what’s not.


‘Evil Eye’ - Franz Ferdinand
I was introduced to this music video by Mickey Mason who directed and shot our latest video for ‘Sunday Mourning’, and when I watched it I could see exactly where he was coming from in terms of inspiration for the video we made together. The idea was for it to be a very Twin Peaks inspired, 70’s B-grade horror movie style video clip, and I think Mickey nailed it. Both videos feature a series of B-Grade horror movie motifs. In the ‘Sunday Mourning’ video clip, these motifs plague every aspect of my life, from an evil masked bandmate in the bathtub to eyeballs and fingers in my cereal, capturing the ultimate hangover from hell. The clip follows me waking up, trying to do some daily routines before going back to bed when the morning is up. I really love this video by Franz Ferdinand, it’s so grotesque but also really funny, which is where we were trying to go with the ‘Sunday Mourning’ clip. 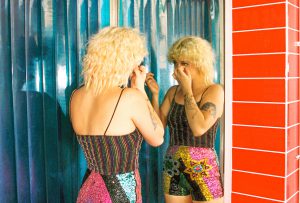 ‘Sunday Mourning’ is out now through Roolette Records - head to hannahkate.bandcamp.com to grab a copy of the single on hot pink 7" vinyl.
Hannah Kate on Facebook
@hannahkateband
Photos by Sonny Witton