Skip to content
Music / Features
Track by Track:
Mark's Paranormal Dysneyland -
Mark's Paranormal Dysneyland
Words by Michael Scalzo
Friday 27th November, 2020
Following the release of Mark’s Paranormal Dysneyland last month through Eternal Soundcheck, we caught up with Mark Spinks to have him unravel the intentions that underpin his sprawling collection of unsettling and visceral blues-punk.
Mark’s Paranormal Dysneyland is a dislocating experience - built with layers of raw and minimal guitar alongside mournful violin and a steady rhythm section, the album captures an anxious feeling of directionless. Especially so, given that the tracks stand apart from each other in style and substance, at times sounding like they could be a shuffled discography of the artist’s work over a longer period of time rather than a singular release. While each moment across the album do share stylistic similarities, these tracks run away from each-other - darting in and out of vocal tones, lyrics and delivery.

However, within the story of the album, this sense of dislocation and stuffed-togetherness reveals that this collection of songs’ tether is an abandonment of over crafted-ness and an embrace of unrestricted contemplation. After a listen or two, you realise these songs certainly belong together and it’s a real pleasure that they have ended up as they are on this album.

Mark Spinks has let himself go within the pure craft of his songwriting and has let the narrative arc of the album define itself. Dedicated to his late partner Caroline, it’s a poignant and introverted collection that is also wonderfully pleasant in its darkness in that it contemplates within a complexity across the happy-sad spectrum. Mark’s Paranormal Dysneyland is well rounded in that regard and contains an unpretentious depth that brings the songs and its subjects to life more than an album that insists you listen to it with a predestined and enforced sense of (insert feeling here).

In some ways, this album sounds like a cross between some solo work of Gareth Liddiard, Father John Misty and Terry in its dissonance and in how its cuts right to the point. Musically too, this would be a decent way of describing Mark’s approach - unafraid to hold his melodies over the beat just that little longer or strip back the instrumentation to just a guitar and a violin if need be. Or how sometimes these songs rest upon simple melodies that hold and repeat in a way feels like the entire tune is being tied together with dental floss which manages to hold in place just long enough for the song to finish. It’s a craft that is lovely to listen to.

This is an album that seems set to grow on you over time, which is appropriate because it seems that Mark has designed it that way both for the listener and for the songwriter. To help us dig deeper into Mark’s Paranormal Dysneyland, Mark was kind enough to share the stories behind each track.
Race It Hasn't Run

With the opening track I wanted to leave the listener with a song that provided some tension and didn't go to places people would expect it to go. I think with Skye's violin and Alex's slide, the space that is left in the song helps achieves that, it sounds like a cliche but I wanted ‘Race It Hasn't Run’ to breathe a little.

I originally wrote this track to use in GRAVEL SAMWIDGE but decided to use it with my solo project instead. It really is a song that is self explanatory and is actually about the loss and grief I felt after my  partner Caroline Milne who I played with in 2 Chevrons passed away. It was a difficult song to write but also cathartic at the same time.

With ‘My Journalist’, I was hoping to evoke the spirit of Rowland S. Howard but with acoustic instruments instead which I hoped I achieved. And also, it was a response to the current climate of distrust in the media, whether it’s warranted or not.

‘I Wanna Go’ is probably the most intense song on the album musically and really is a response to the insanity in the USA at the moment and all the players involved on the right. The harmonics in use in the chorus is an example of the discord and I wanted the album to have moments of light and shade if i could pull it off.

The spectre of Caroline Milne is all over this album and ‘For You’ is a prime example. The initial riff was Caz's and was meant to be done in 2 Chevrons. Obviously it never eventuated 😥 so I tooK the first part and completed the track with a chorus added. Skye McNichol from Bent sang the female part beautifully and did it justice in my opinion.

‘Commitee Girl’ is probably the most upbeat song on the album musically and is influenced from one of my previous bands Scrabbled and possibly Kitchen’s Floor. I wrote this song for a friend of mine who really helped me out after Caroline's death, it's about her work in a woman’s domestic violence shelter so even though the music is upbeat, the subject matter is a lot darker which once again harkens back to that theme of light and shade I was after.

This track was possibly influenced by a band like The Fall, and was originally just done with acoustic guitar and slide but it morphed into the full band treatment with bass and drums added.

What Your Sister Says

‘What Your Sister Says’ was originally written on keyboards and Skye added a drone-like violin section which added to the unsettling nature of the track. Once again it has moments of melody which ventures into discord… this is the effect I was after. 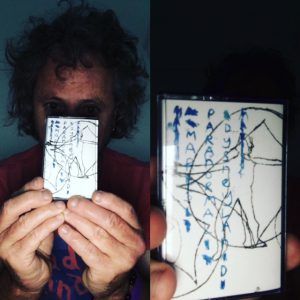