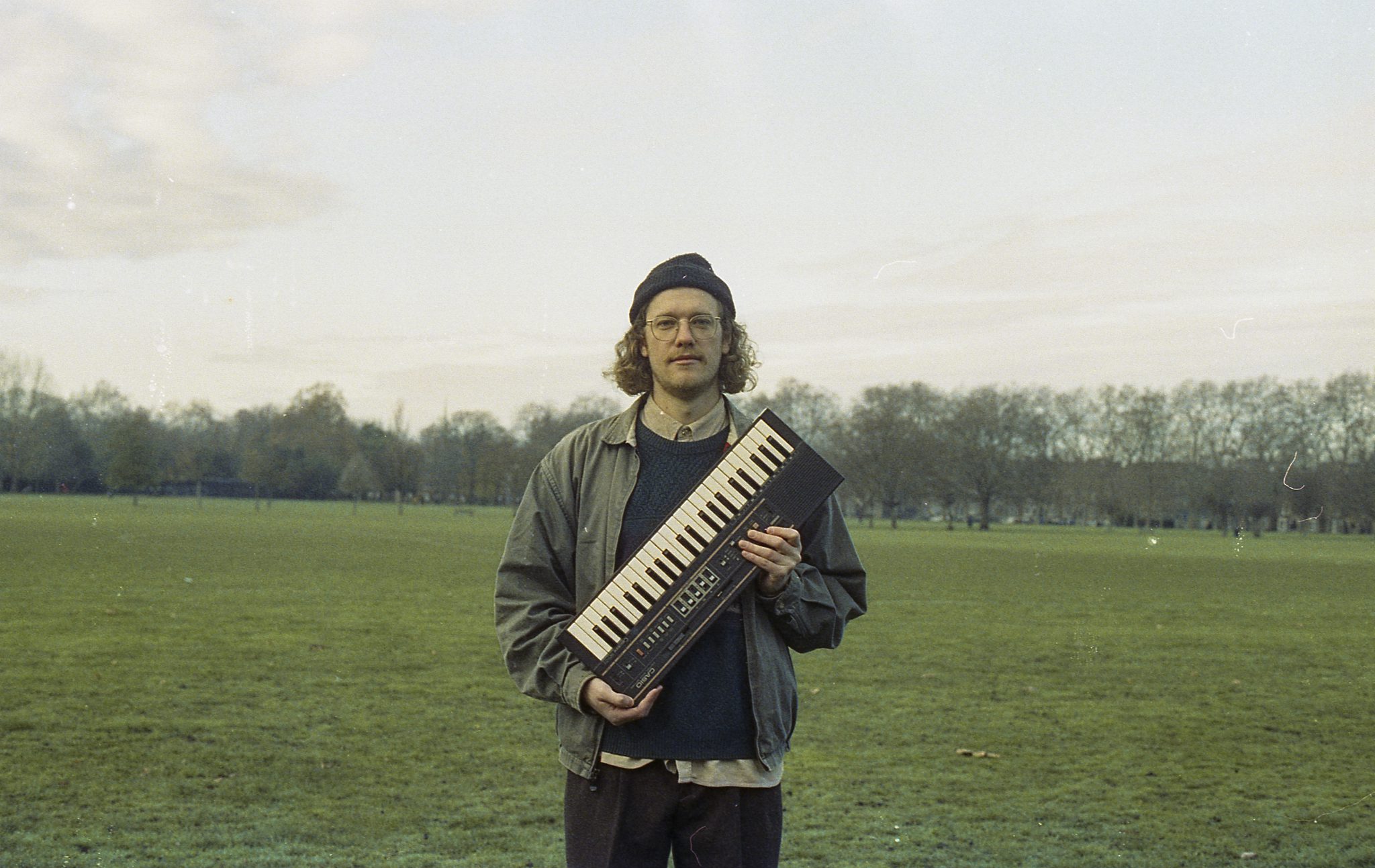 After returning to his home of London in 2019, Melbourne post-punk alumni Tom Brierley began working on a brand new solo project under the pseudonym Beige Banquet, a vehicle to toy with his unique brand of awkward and angular weirdo-punk. Now with his debut full-length Beta released, we had Tom talk us through the bizarre chaos captured across the album’s 12 tracks.
If the U.K. fails at controlling the spread of the COVID-19 virus again, they would do well to get Beige Banquet - the new post-punk project from Tom Brierley - as a replacement for Boris Johnson to announce any strict lockdown laws: with Boris’ fumbling lethargy it’s little wonder people have been wary or inattentive to his messages. This just wouldn’t be a problem with Beige Banquet, such is the searing command with which Brierley robotically spits his words.

Post-punk has been thriving in South London in recent years, mostly based around The Windmill in Brixton. Yet the scene’s fledgling band’s have discovered new sounds on their latest records: Goat Girl’s On All Fours feels inspired more by the swirling and cool synths of Stereolab and Broadcast; black midi play too progressively and experimentally to fit the genre; Shame reduced their youthful fire in favour of increased melody and grooves that recall Talking Heads on their second album Drunk Tank Pink.

Across the river in East London though, alone in a tiny bedroom, Brierley held his outpost as a true DIY post-punk artist, his debut full-length all recorded and produced by himself (he has since invited a full band for live performances). After a string of split releases with PKNN (London) and NOUGHTS (Melbourne), he’s gone it alone on Beta, released via Just Step Sideways Records (his own label) on January 29th.

Over 12 tracks, Brierley’s sound bores into the listener’s mind and pummels them into submission; repetitive guitar lines and mechanical drum machine beats will do that. It’s resolutely restless and anxious, strikingly mirroring the claustrophobia of being in lockdown in 2020. To listen to Beta is to feel the isolation and alienation that tarnished last year. It’s a record that, above all else, is the sound of an artist and his music completely enmeshed; Brierley obviously had a vision in mind and he achieves it with clarity.

Agitated and gritty guitar lines are forever in a hurry to get somewhere on the record but the motorik drum beat always knows when to rein them in. These songs reveal themselves like dystopian transmissions, blasted icily and threateningly to an unsuspecting public. Brierley bellows and declares, his robotic voice assured and unnerving. In the end, it’s the album’s lead single that encapsulates the Beige Banquet style most completely: ‘Wired/Weird’ it’s called and this is the sound that Brierley has crafted. It’s an artful blitz of singular and strange DIY post-punk, that already feels like nothing else in 2021.

We thought we’d pull Brierely away from his corner of East London for a moment to personally take us through each track on Beta.
Welcome to Rock Music

I always like the opening track on a record to introduce the listeners to what's to come, from a tonal point of view - you know, kind of set the scene for the ears. But this opener ended up doing this in the most literal and self-referencial way possible; with the repeated self-referential line of "Rock Music". There's probably about three inside-jokes in this track. I'm not sure anyone gets them though. Maybe just me.

This track was actually the first of the initial demos I wrote when I was sketching out the record around the start of 2020. It's a bit of a vignette I suppose, a character study into an outsider who’s unable to feel normal within social settings and has been left behind, to a point where they’re pretty horrified and disgusted by other humans. Almost as if someone is seeing humans without humanity, just big gross sacks of meat walking around. Although the concept wasn’t really preconceived, the words just seemed to fit the seedy, almost crawling, sound of music.

Some people might call this filler, I call it an interlude. Either way it acts more of an introduction to 'Cold Yoghurt'.

I think of natural yoghurt, straight from the fridge, as some sort of magic balsam to sooth the effects of anxiety. Although the track has nothing to do with the delicious dairy product, it does follow the narrative of a character who is paralysed by the thought of physical intimacy. Split up into three distinct parts, the first is tight, wooden and inflexible, the second opens up as the character starts to overcome their irrational fears, and it ends with an almost joyous outro as the protagonist comes to terms with their own sexual desires.

Maybe they had some of this magical soothing yoghurt after all? Strangely enough the guitars and bass come in three beats after the drums, something that has now been described as a 'Tom-ism' and you really only notice these quirks when you take tracks you've worked on by yourself and try to play it with other musicians. Most of the time I have no idea what's going on.

This is another character study into someone who's totally consumed by the desire to leave an artistic legacy, to a point where they can't relate to people who don't devote their lives to artistic pursuits. I reckon they're a bit of a dick actually. I think it's the only track that my trusty Casio MT-52 made the final mix. It's quite a chaotic track and I think it will be a good one to play live, whenever that's possible again. I think when the bridge that kind of falls apart and then builds itself up again for one final push into the chorus is one of my favourite moments on the album. It's definitely the apex of the first half of the album, slowly building up to this point, a very noisey release of cathartic energy.

I often think of myself as a very rhythmic musician, which is in turn a nice way of calling me atonal, and I think ‘Undefined’ is a pretty good example of that. It starts off really tight and wooden with almost no tonal variation, the notes are simply tied to the repeated rhythm. It does open out in the end with a little bit of melody which feels pretty at odds with the nature of the song, but it's a much needed moment of calm and order after the chaos of ‘Hotel Room’. No characters in the lyrics for this one though, it's a good and honest 'Ode to Melbourne' that I wrote not long after I'd arrived back in London. Moving back home is definitely harder than moving away.

I drunkenly tried to write some lyrics and in the morning all I had was "No waiting you're the one" misspelled and typed into my phone. Sometimes that's all a song needs.

What Is Going On?

As someone who simultaneously suffers and benefits from quite dramatic fluctuations in mood, I wanted to write a track that captures the excitement and confusion you get in the most frantic of times. Those times where you're poised somewhere between an ego attack and the general frustration that the world is moving to slowly for your mind. That's not just me right?

It's a very simple minute and a half of music to be honest and sometimes I find myself wishing it was a bit longer, but some of my favourite songs of all time are just a snapshot of a simple idea, nothing else. The layered guitar lines are super fun to play as well, I think this might have been a moment when I released that if I played two very simple things at once, it sounded like I was a competent guitarist.

I wanted to create a moment that feels suspended in time. Like a stuck record. It just meanders and transitions from the frantic nature of 'What Is Going On?' into 'Completely Signified'.

At some point during the process of recording and mixing the record I stopped seeing the songs as songs and started feeling them as scenes in a film or levels in a computer game. 'Completely Signified' is probably some sort of introspective dream sequence - and with the half time drums it feels like a rare stoned moment of sweetness amongst the chaos of the record. I think it stands out stylistically in the album. I'm going to be totally honest and say that I'm not sure what 'Completely Signified' actually means, although I think it's probably something to do with a struggle to understand other humans. To a point where I'm not sure I totally understand myself on this track.

If the previous track was a dream sequence then 'Cicada' is definitely the 'sewer level' and absolutely my favourite on the album. It's somewhat of a reworking of a song me and my dear dear friend Sam Birkhead wrote when I was back in Melbourne, I hope he doesn't mind that I 'borrowed' it for the record. I've got to give him credit for coming up with that killer guitar part that I just play relentlessly for the whole 6 minutes. The transformative mantra of “Shed like a cicada” is me trying to push change on to myself through repetition. Musically, I'm just trying to imitate Can, badly. However, it's one of the few tracks that wasn't demoed first and it's essentially just me jamming with myself and the bass and both guitar parts are first takes.

So this ended up being 'Beta II' as it was the second half of a much longer song, the first half became 'Beta I', but didn't make the final cut. I like that it has momentum that seems to carry the record to the finish line and opens into a retro-futuristic soundscape. I'm not sure why I decided to add the strings at the end, it's definitely a not very me thing to do but I quite like them. There's really only nine words in the song, however to me it feels the most personal lyrically and still manages to communicate exactly what I wanted it to.
Beta is out now in all the usual places. Head to beigebanquet.bandcamp.com to purchase the album on limited cassette.
@beige_banquet