Skip to content
Music / Premieres
Premiere:
Coolabah Kings - Spineless
Words by Will Brussen
Friday 17th September, 2021
Coolabah Kings present their very first output as a band ‘Spineless’, a raucous narrative driven blast of garage-punk. We’re stoked to be premiering the track today alongside a chat with the band to get to know them better.
A band formed between three good mates, bonded by a mutual passion for live music, is a likely story in Melbourne. However, for Coolabah Kings, releasing their first music is an even more exciting prospect; after forming in early 2019 and with a pandemic occurring between then and now, they’re only finally coming into the world with ‘Spineless’ today, a first taste of what’s to come. Made up of Conor Walsh on vocals, Harry Anderson on guitar and Seamus Murphy (also of Perfect Whip) on drums, the group bring a mixture of experience and freshness to the stage. But as frequent gig-goers, their time spent in the crowd of the many pubs around Melbourne has served them well, as they bottle up the feeling of a rowdy sing-a-along and distill it in their first offering.

For a group that described themselves as “scrap-rock”, ‘Spineless’ is bursting at the seams with energy, held together by the pulsating guitars and a thumping backbeat. The song opens with syncopated claps with a driving guitar line underneath, before vocalist Conor steals the limelight with his snarling vocals, setting the scene for a gut-wrenching yet self-deprecating story described by the band as “a tongue-in-cheek retelling of a true story, about a teenage bravado-fuelled journey to the wrong side of the tracks where a chance encounter with some much tougher boys left some scars that will never completely heal.”

It’s a story that's at once personal and relatable, as Conor yells, “this dog never had much bark or even any bite”. It’s not just a straight up blast of garage-punk though; the band play with dynamics well, stripping things down midway through the track and covering Conor’s vocals with a heavy reverb that works to build the mood back up for the end of the song. However, before long, Coolabah Kings are back doing what they do best, as the track charges to its ending with another bout of distorted guitars and Conor’s idiosyncratic growl.

Although it’s not exactly likely that their scheduled first show with Sophisticated Dingo will go ahead next month, the band have kindly had a chat about what inspires them and what more to expect in the future, to tie us over until we can catch them in the flesh.
TJ: Who are Coolabah Kings? Can you please tell us a little bit about yourselves?

Harry: Coolabah Kings are a three-piece, dirty, DIY, scrap-rock band from the inner north of Melbourne. Consisting of Seamus Murphy (of Perfect Whip fame) on drums, Conor Walsh on vocals and Harry Anderson on guitar. Essentially three friends who like loud noises.

Harry: We’ve been sitting on ‘Spineless’ for quite a while. From memory the writing process was extremely fluid. I had been sitting on the subject matter since I was a teenager, so it was time to give it some oxygen. It came out in one day as I was jamming on my own in early 2019. The chords, the lyrics, the drums, the vocal inflections and the overall structure just spilled out and have more or less stayed the same ever since. We starting jamming together as a band at around that same time and I can remember us all locking into it straight away. That connection carried on really well when we finally got our shit together and recorded it in between lockdowns two and three of 2020/2021. We recorded, produced and mixed it all ourselves in the garage of my Coburg share house and it went off without a hitch. It was a steaming hot December afternoon, and I recall Seamus having to drum most of the day shirtless, which should offer plenty of mental eye-candy for your readership - he is truly a stunningly attractive man.

In the scenario described in the song, what would be playing in your headphones whilst this was taking place?

Harry: We can confirm that the song playing in the real life scenario that this song is based off was a Misfits cover of the Ben E. King & the Drifters classic ‘This Magic Moment’. Which in hindsight, only enhances the hilarity of the situation with its thematic and dynamic contrast. Kind of makes it like a scene out of an Edgar Wright movie or something. Needless to say it has been somewhat of a difficult listen ever since. We would highly recommend listening to our track first before checking that one out for yourself. 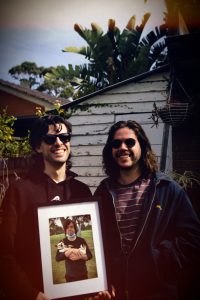 What can we expect at your first show with Sophisticated Dingo at The Tote?

Harry: Well pandemic pending, you can expect a rowdy and raucous collection of hard-hitting and hilarious tunes ranging from the same wheelhouse as ‘Spineless’, churned out as intensely as our lockdown bodies are able to exert them. But the real treat will be the boys from Sophisticated Dingo. They’re great friends of ours who are at the top of their game and making sensational music right now. We’re just stoked to be mentioned in the same sentence as them to be honest. But if it doesn’t go ahead, we’ll be sure to crack in at another time when we get the green light.

Conor: Our first show will be my first time on stage, so expect somewhat of a deer in headlights hopefully finding a way to keep up with my accomplished bandmates. In saying that, we’ve been playing for a long time behind the scenes, so I can’t wait to feel the rush as things finally come to fruition. As Harry mentioned, to play with Sophisticated Dingo is a real treat for us and we are very grateful to have their amazing support.

What are some of the biggest influences in terms of the sound of Coolabah Kings?

Harry: That list is a long and winding road, but we draw a lot of influence from groups like The Chats, Amyl and The Sniffers, Bad//Dreems, West Thebarton and King Gizz.

Conor: I’m a gig junkie, so on the odd occasion where I’ve put together some ideas for Harry to mould into a real artwork, it was often off the back of a local show that had me inspired. The Pretty Littles, CLAMM, Rhysics and Drunk Mums are a few (of many) that immediately come to mind - I love their driving, catchy sound and infectious energy.

What else can we expect from Coolabah Kings?

Harry: We’ve got an EP waiting in the wings from those sweaty, shirtless seasons of last summer. No official release date as of yet, but once everyone is double vaxxed and we can get back to our favourite local venues again, all festivities will be confirmed accordingly.
'Spineless' is out today in all the usual places.
Coolabah Kings on Facebook
@coolabah_kings