From the get-go, drummer Chris’ vocals steal the show, their endearingly unabashed delivery making the twists and turns of the tale all the more entertaining. With such a hilarious narrative at the centre of the track, it’s easy to get swept away by the glory and chaos of the story being told, but underneath, every win is made all the more joyous with Lauren's ripping guitar work and sweet ooh-la-las atop the thundering groove. Complete with its rollicking chorus, a spoken-word doo-wop breakdown and some of the most on-point lyrical descriptions we’ve heard in a while, there’s plenty to get hooked on here; and the best part is that it sounds like Loveboner are having just as much fun as we are.

With the new album on the way, coming out through the excellent Psychic Hysteria (a first time pairing for the two), there’s a lot for Loveboner fans to look forward to. But in the meantime, just enjoy the fact that here's a new banger for you and your step-dad to bond over. 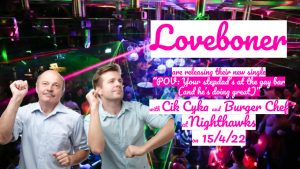