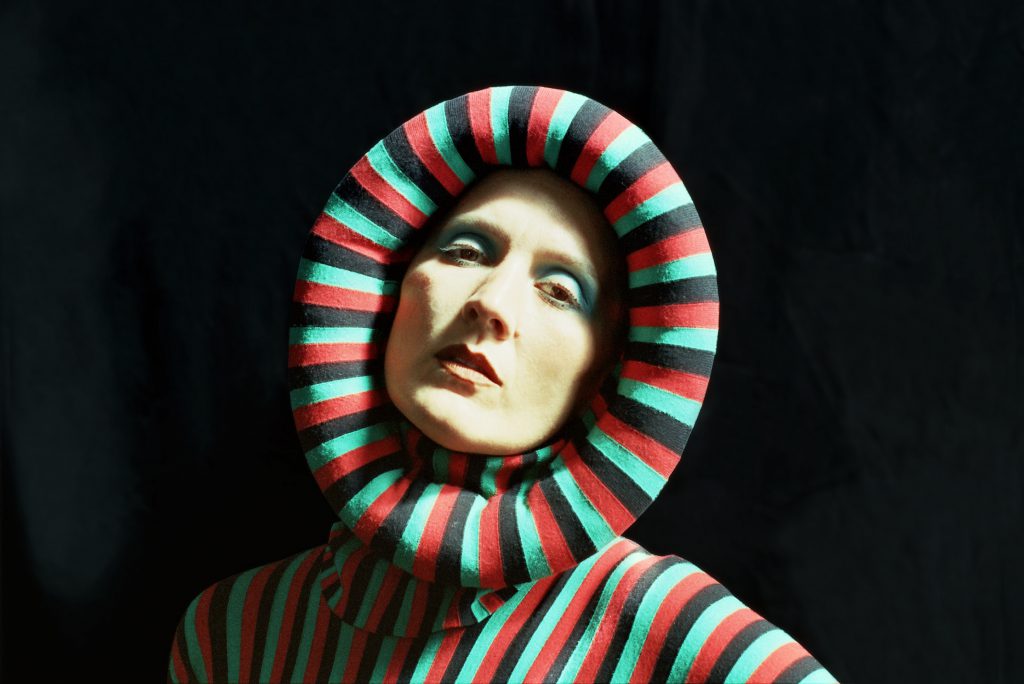 Ahead of a run of shows across Australia in support of her new album Pompeii, we had a chat with Welsh art-pop icon Cate Le Bon to explore the creation and ideas behind her mesmerising sixth record.
Created in a self-described “uninterrupted vacuum”, Cate Le Bon’s sixth album Pompeii is both a product of the time and something else entirely. On paper, the conditions that lead to this album being created seem strangely predestined; recorded amidst a global pandemic in a house in Cardiff, Wales that she’d live in 15 years prior, with just her partner Tim Presley and long-term collaborator and co-producer Samur Khouja for company. Like much of our lockdown life, the reality was perhaps less cosmic (as Cate tells us she “could have made this album in ten different settings”), yet Pompeii feels far greater than the circumstances it was crafted in - the tightened lens perhaps enabling Cate and co to zoom back outwards on a vaster scale, a broadened scope that feels existential, universal and timeless.

Following on from 2019’s Reward, Pompeii exists in a similar sonic space, although where the previous album was illusive and enigmatic, Pompeii feels a little more elegant. It’d be amiss to suggest the soundscapes are minimalist because they’re not; instead, they’re so cleverly designed - with each glowing synth, emoting saxophone and wandering bassline in the exact right place - that Cate’s potent vocals feel steely and out in the open, as if absorbing all the surrounding instrumentation.

That’s not to say Pompeii lacks charisma or colour though; alongside some of Cate’s most incisive hooks yet, Pompeii packs together a swirl of intoxicating grooves, joyous zigzagging melodies and her signature sideways lyricisms. If she’d already proved herself a master of building worlds within her records, Pompeii might just be her most kaleidoscopic, one that seems to expand constantly - evolving and refracting what’s come before - as we journey deeper inside.

We were lucky enough to get on the phone with Cate from the Welsh countryside, ahead of her upcoming Australian tour this month.
I wanted to start by asking about both where the album was made and the context it was made in. You’ve mentioned in the past that you like to create albums in an uninterrupted setting, I think you called it a bubble. I guess Pompeii must’ve been the most extreme version of that.

The intention with this record was it was always going to be myself and Samur [making it], and I was going to play everything apart from the drums and the saxophones. I’d looked at studios in Chile and studios in Norway to really go hard on this ‘let’s go somewhere really remote where there's no external influence’ kind of idea, so we could get really lost in it; also because neither Samur nor I really engage with social media, which helps with extracting yourself, I suppose. I held on as long as I could with all these plans, and then I kind of realised it was totally incompatible with the reality of what was going on in the world. So I ended up making a record in a terrace house in Cardiff [laughs] and one that I had lived in 15 years previously, so it was like total opposite. I guess kind of a lesson in not depending on the geography of where you are to try and tap into that space of being isolated; but you can mentally, if you try hard enough to get to that place.

Do you think the songs on this could have come to life in a different context?

I'm also not sure if you can really hear that setting in the album because it's so colourful. Would it bother you that people might look back at this album as your lockdown album, or is that sort of the point?

No, it doesn't bother me. That's a fact, isn't it? And when the whole discussions about press and all that stuff were coming up, there was this idea that ‘oh everyone's made a lockdown record’, so is there another way of reframing this? And it's like, well, no, this is something historical that happened and those are the conditions that the record was made in. It seems ridiculous to try and omit that from the narrative.

I did notice that when I was doing a bit of reading around the album that there was a focus on Pompeii being a lockdown album, but I think it strangely somehow doesn't feel like that, even though we know the context.

Yeah, it doesn't sing directly to the pandemic I don't think. It's more of an exploration of feelings that arose because of the pandemic, and universal themes like time and religion and existential dread, and all those things pertain to kind of any period of your life, don't they? But I think the pandemic kind of dredged them up to a point where they were impossible not to kind of explore.

Something I did want to ask about was the lyrics on this album, because I know in the past you've mentioned that you’ve leaned into the idea of your lyrics being a last minute part of the process, and I wondered if your relationship changed with lyrics this time around.

You know, I had these notebooks of lyrics I’ve been keeping since I made Reward. But I guess when it came to putting lyrics to music, these lyrics that had been written in a different kind of time with a different headspace, it felt kind of incongruous with the music that inhabited a lot of the contradicting feelings that were going on at the time. So it was a lot of time spent rewriting, having lyrics that I thought I could sing that resonated with everything [going on]. So yeah, little bit of both maybe.

Were there any key songs that changed quite dramatically, from before the pandemic and then amidst it.

Yeah, I think so, it’s kind of hard to remember now. You know, they only kind of exist as their final form in my head now.

Speaking about the album existing in its final form, you’ve spoken a bit about how the portrait that Tim [Presley] painted affected how you were processing the album and how it eventually came out. And I know you've said a lot about the painting in other interviews, but I wanted to ask about how you went about converting those feelings into sound, because that feels like an almost impossible task. Are you able to articulate the process?

It's a difficult one to articulate because this painting was so beautiful to me. It evoked so many feelings. But I also was aware that I was putting a lot of feelings into the painting as well, it was like an echo chamber. I suppose it was a very particular time - we were all very sensitive, we were all heightened and we weren't as distracted as we usually were, so we were able to really indulge in how this painting had made us feel.

And I suppose at the start of a process I really didn't want use any kind of concrete words or any kind of definitive influences when Samur and I were talking about the record, because I wanted things to remain open-ended and that we could take the record anywhere we wanted it to go. So to have something quite abstract that we both understood, in a way that I think was quite similar, to guide us… it was just really impossible to put into words. We’d be making synth sounds and we had a cartridge of sounds that were specific to the record, and we’d kind of look at the painting and go, ‘does it sound like the painting?’ And it was instinctive; we’d be like ‘yeah’ or ‘no’. But I guess it also really speaks to how unprecedented a time it was. You can indulge indulge in all that stuff. 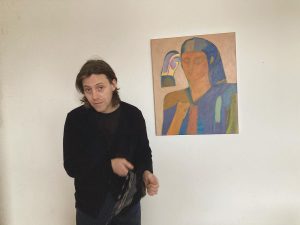 Were there times when your individual ways of transferring those feelings into sound didn't line up with each other, or did that open more opportunities with the music?

Yeah. I mean, I work now exclusively with Samur really, because of the way that we have such a shorthand when it comes to working. And he really understands what it is I love and what it is I don't love. That is also probably why we felt the same way about the palette, more so maybe than what the painting was emitting to us. But maybe a combination of the two.

It makes sense that that wasn't an accident.

It's quite hard to kind of look back and empathise, even with yourself, during those times, because all the things that were going on. It was kind of wild, wasn’t it? And for all these kind of things to be going on, but you’re locked in a house and it’s the only outlet we had. And we were really lucky, to just put it all into music.

Has it been strange taking these songs into the live setting and into, I guess, such a different world now to what it felt like a few years ago?

Yeah. This record was crafted in such a kind of private, insular setting. I guess it's with any record that faultline between something so private becoming something so public, and it's quite an abrasive transition. But for me, it's always when I start learning the record with a band of people that I love and trust, and when you start performing a record, it takes on a whole different meaning. I reconnect with it for the first time in a long time, and I get to see it from lots of different perspectives. To me, it's like a time when I kind of reclaim it as my own. But it's also just the crisis when we were making the record, we didn't even know if I would ever perform it live. So it’s like ‘holy shit, I’m playing this record live, this is insane’. So there’s lots of feelings.

It must be pretty exciting.

And just finally, I think I read somewhere recently that someone described you as an iconoclast - which I didn't actually know what that meant - but I looked it up, it's a person who destroys cherished beliefs or institutions, which kind of then brought me back to the album cover of Pompeii in a weird way.

Is it a compliment? [laughs]

What I wanted to ask is, because I don't know if you would describe yourself that way; I wanted to know if there was a way that you do think of yourself when it comes to what you're aiming to do with your music.

No, because I think stuff like that's quite inhibiting. Just allowing it to be whatever it is without any preconceptions is, to me, the only way I really enjoy making music. It feels untethered and it feels unrestrained. It's like, people will have polar opposite opinions about something you do and you just have to extract yourself from interacting with other things, but also stop yourself from doing that to yourself as well. With every record you try and annihilate your own identity a little bit and just make something that is as authentic as you possibly can. Otherwise, what’s the point? 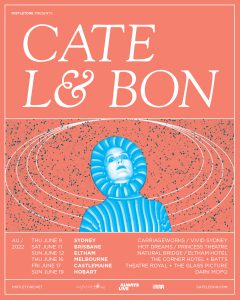 Cate Le Bon is performing around Australia this month, with stops at The Corner Hotel in Melbourne on Thursday June 16th and the Theatre Royal in Castlemaine on Friday June 17th - head here for tickets. These shows are presented as part of ALWAYS LIVE, the State’s newest major event.

Pompeii is out in all the usual places now and available here.
catlebon.com
@catelebon
Photo by H Hawkline