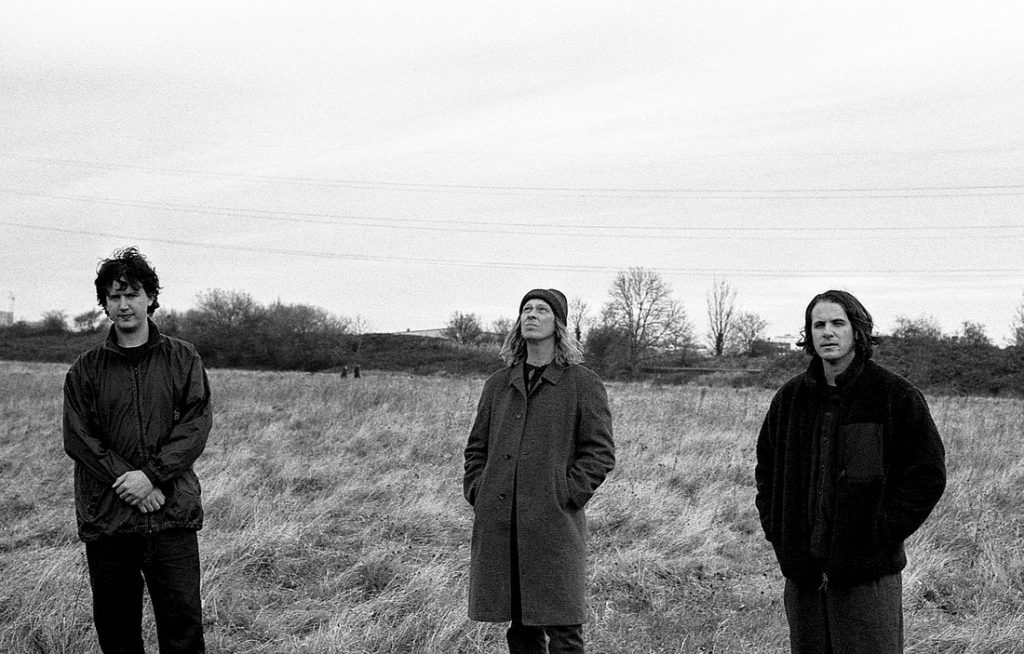 Off the back of the release of In Spirit last week, the third album from New Zealand/London group Popstrangers, we got in touch with vocalist/guitarist Joel Flyger to get the stories behind the warped and visceral indie-rock that makes up the new record.
It feels simplistic to tag cult New Zealand trio Popstrangers as an indie-rock band, but at its core it’s probably a fair assessment. Although the genre might’ve been muddied a little over more recent years, the sounds on In Spirit seem to hark back to the golden era of indie-rock, where songs were anchored in melody yet forever uncompromising and reliably unorthodox. Across In Spirit, there’s this constant push and pull between light and dark; gritty and unsettled yet coated in an earnest, at times joyous, sheen, it marks a thrilling return to form for the group.

From beginning to end, there’s a heady sense of haphazardness to In Spirit, as if every left-turn or mood swing was craftily designed to buck listeners off the pulse. Opening track ‘Try Trust’ builds around a penetrating instrumental while Flyger’s acerbic vocals sit front and centre, before ‘Like Paper’ shifts the tempo with a sedated groove and restrained delivery. Similarly, singles ‘Are Doves Pigeons?’, ‘In Spirit’ and ‘No I.D.’ are equally temperamental; while these tracks are each buoyed by clear pop smarts, they progress (in that order) from tender to enthralling to agitated. This sense of nervy, pent-up energy doesn’t go away as In Spirit rounds out - ‘Crack Track’ plays as the album’s most paranoid moment, ‘Silhouette’ saves the record’s strongest hooks for a last second pressure wave, and ‘Shine’ sees the band smothering any lasting wistfulness under a disorientating and murky haze to wrap things up.

All in all, it’s an easy album to get hooked on, as it leaves us with the feeling there’ll be plenty more to uncover beneath the surface on every listen. So to help us dig into In Spirit a little deeper, Popstrangers have kindly walked us through the album track by track.
Try Trust

‘Try Trust’ is about rebuilding the foundations of trust in relationships with people where it has lacked in the past and realising that without it there isn’t much holding things together. It’s based on a period a couple of years ago when in a few different situations with family and friends it got to the point where it was probably easier to just move on and bury the hatchet so to speak. It’s an ode to lowering the finger of blame, accepting faults within yourself and other people and trying again.

We recorded this song live in a studio in London and I overdubbed the saxophones for the outro. We hadn’t rehearsed this song much before recording it but we had a strong vision for its recording process.

‘Like Paper’ came about during a pre-pandemic time of isolation in a remote part of the west coast of New Zealand. I had been living overseas and was back for a few months and felt more connected with the land and environment than I ever had before growing up. It was long enough to start realising small physical changes to what was outside and thinking about our relationship to the land and people that had lived here earlier. I thought about fires and burnt out bits of the countryside I could see, and how the next person to live where I was staying would see it differently.

It’s one of the few songs on the album that has noisier sections where no guitar pedals were used and all the tone and drive came from two old amplifiers that were in the studio. One was a Wem that featured on a lot of the tracks after this song was recorded.

‘In Spirit’ is about being away and distanced from people that you want to see but are not able to because of work. It's about waking up and asking yourself what and why you are doing it and trying to figure out if it's worth it. Sometimes it's hard to imagine a better situation or not able to know how to make a better situation with what you have at the time.

A few different versions of this song were recorded before we settled on this one with a moog bassline in the verses. It made sense at the time to strip it back.

This track is about the conversation I had with a friend where he told me Pigeons and Doves were from the same family of birds. We had a conversation about how Doves could be universally loved as symbols of peace and then Pigeons were treated like pests. It's an attempt at a lullaby based on the assumptions we make at first sight.

This song was recorded live with bass and guitar and the guide vocal was the first and only take we recorded for the song.

Basically this song was written about climate change deniers and was composed more visually than as a song per se. It is meant to feel like being swept up in a storm in parts and then delivered somewhere else.

This is another song with no guitar pedals and lots of amp drive. It was another track we recorded live.

This song is about surveillance and the status of refugees without any formal identification or those who are stateless.

We used a few different semi functioning synths for this recording and got what we could from them. We wanted it to sound scratchy and irritating.

This song was written to a friend who was going through a time and it's meant to be a positive reassurance of the good. All the backing vocals are meant to support the theme until the outro where it breaks up and the saxophone comes in. Its aim was to build and build and not falter. A message of support.

The bells at the start are meant to signify a wake up call of sorts.

This track is all about the vibe and is meant to be the accompaniment to a long drive which was an early theme we envisioned when starting this record. It’s meant to have plenty of space for thought and blissing out.

There are a few variations of this song with different basslines but the one recorded seemed to stick.

This song is about the shaking of routine and trying to justify an existence that doesn’t operate in normal working week hours. It's positive reinforcement that a healthy life doesn't mean the same thing to everyone but if it works for you it's ok.

This was the first song written in this guitar tuning on the album and then most of them followed.

This song is about friendships that slip away when a period of sobriety comes through or the common bonds that were keeping it together are removed. It's about how far you will go for someone in a destructive friendship like this when the shine wears off and if its foundations are built negatively.

The sounds on this song are from an Oberheim and the drum samples were done at home on an 808 and through my pedal board.
In Spirit is out now via Rice Is Nice Records - head to popstrangers.bandcamp.com to grab the album on limited 12" vinyl.
@popstrangers