Skip to content
Music / Features
A Quick Initiation
to Common Cult
Words by James Lynch
Tuesday 24th July, 2018
Fiercely independent and built around a solid community, Common Cult is a young Melbourne-based label that is steadily asserting itself as a name to keep an eye on. Although running a label can be something of an undertaking in this day and age, with a mantra that reads “for struggling artists who refuse to struggle anymore” and the ability to bounce between mediums (from record label to writing collective through to film company), there doesn’t really seem like there’s anything stopping Common Cult from doing what they want. Ahead of their second birthday this Thursday at the Evelyn Hotel, we had ringleader Hayley Francis give us an initiation into the cult.
TJ: Hey Hayley, want to tell us a bit about yourself and Common Cult?

HF: I know my doctor has my occupation down as bartender/writer/musician which sounds really cool, but in reality I’m a 23 year old who stays in her pyjamas until sunset, and works on projects from the comfort of her bed. Common Cult is my biggest project, a record and zine (and sometimes film) label with a strong DIY ethos and appreciation for anything honest and quirky. We put on gigs, release music and publications, and sacrifice an anti-vaxxer to our One True Leader every full moon - okay, maybe that last bit was a lie.

It’s a pretty brave endeavour starting your own independent label - what inspired you to start Common Cult?

The idea came out of a frustration I was feeling in uni trying to find ways of publishing my writing, and my friends were feeling a similar frustration getting their music into the world. We were all just starting out and felt like we had no platform to stand on, so I decided to find a way we could support each other, a kind of power in numbers approach. I was really inspired by interviews with Loke Rahbek who started Copenhagen label Posh Isolation with his friends when they were about 20, and Pablo Alvarado from Bone Soup talking about his DIT (do it together) strategy.

You also perform in local bands Anti-Violet and forever renter - how do you find time for everything?!

I very rarely sleep before 4am and sometimes I don’t get a chance to do my laundry for weeks haha. If anyone can figure out how to squeeze more hours into the day please let me know!

It’s Common Cult’s 2nd birthday this Thursday at the Evelyn with a bunch of great bands on the bill - any idea what we can expect?

You can expect oodles of great music, including new stuff from Meander who are about to release a single and Tina Growls who will be dropping their debut EP later this year. But as well as music you’ll find exciting readings about life, fear and washing instructions by our writers, a merch table stacked full of zines, stickers and badges, projection art and paintings, super cheap drinks, party hats, balloons and most importantly lots of lolly snakes (if you get in quick). 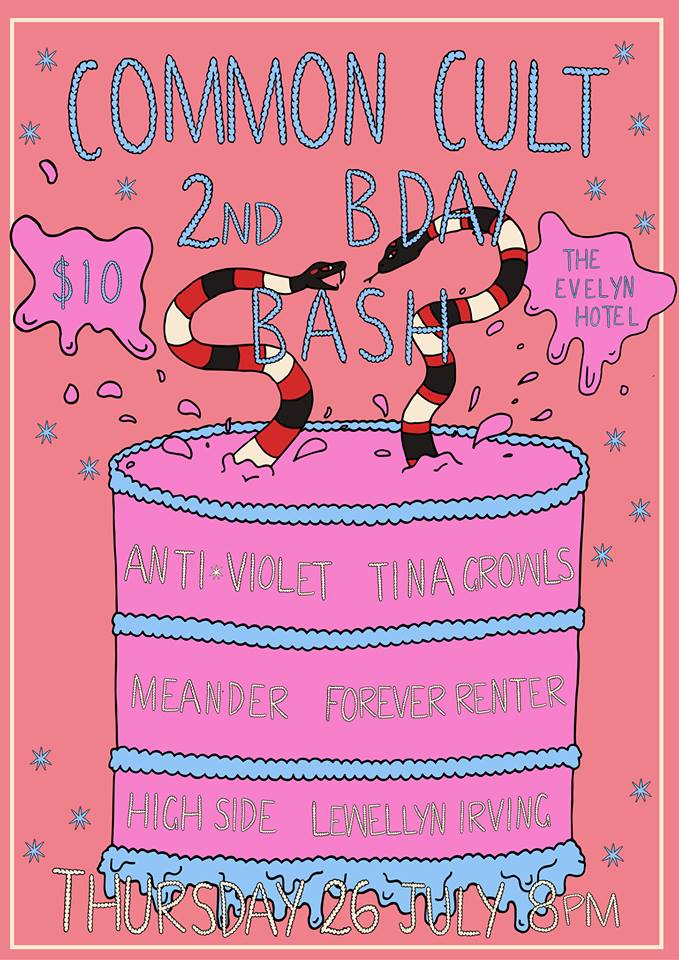 "‘Fuzz Brain’ was the first single we ever released on the label. It marked a completely new sound for Anti-Violet (which I had only recently started playing in) and later had a super fun, lo-fi video to match. It’s a wacky combination of angsty vocals and summery guitars, all held together with tasty lashings of fuzz. I don’t think we’ve been able to play a set without this track ever since!"

Meander – ‘5 Litres’
"The final track on their debut EP of the same name, ‘5 Litres’ is a cheeky ode to the humble goon sack and the parties surrounding it. The recording is loose and fun and full of the Meander’s vibrant personality. Like many of their sets, which have included multiple broken strings, jokes that make no sense, and the ability to lure dogs from their homes, this track is a beautiful mess."

AMIKO – ‘Teaser’
"Although they called an indefinite hiatus after the release of their debut EP Diosma, AMIKO’s track ‘Teaser’ is still one of my favourite releases of ours. Slowly growing through verses of love (or maybe just lust), the band weave a ridiculously catchy tapestry of huge bass grooves, crunchy beats and yearning guitars which burst into a high energy outro. Very solid effort."

Lewellyn Irving – ‘Sometimes'
"We usually hide him on the kit up the back in Anti-Violet and Tina Growls, but as it turns out lanky boy Lewellyn Irving is quite the one-man band himself. His just-released debut EP is full of moody, bluesy tuneage, but the way this track explodes from tinny tape recording to a gritty and loud full band gets me every time. Great beats, mesmerising guitars and the lowest voice in all of Common Cult."