Skip to content
Music / Premieres
Video Premiere:
Hideous Sun Demon -
SSPPUUNNKK (Live at Taste Police HQ)
Words and interview by James Lynch
Thursday 22nd November, 2018
Following on from the release of their third album earlier this year, garage-punk psychos Hideous Sun Demon are back with a live clip for their disorientating single ‘SSPPUUNNKK’.
Over the last five years, Hideous Sun Demon have been blasting audiences around the country with their amalgamation of menacing psychedelia mixed with brutally dangerous punk. In July, they dropped their third album Fame Erotic Dream, and amidst a packed national tour, the band managed to find time to sneak into the headquarters of Melbourne’s Taste Police to record a live video of album highlight ’SSPPUUNNKK’.

The track itself is a burst of fried garage-psych, built around a sludgy, sleazy groove which lurches with the same kind of gross swagger that the song’s character seems to possess, before flipping into a propulsive chorus that hits like a punch in the face with its pummelling drums and wall of guitars. If the studio version wasn’t wild enough, the new clip sees the band taking everything up an extra notch - powered by the same raucous energy you’ll find at a Sun Demon show, the live version levels up with Vincent Buchanan-Simpson’s shapeshifting voice at its most reckless as the band pounds away alongside, plus some tasteful push-ups and distasteful sunglasses thrown in for good measure.

To find out a little more of what Hideous Sun Demon have been up to lately, we got in touch for a little check-in.
TJ: Hey crew, today you’ve given us the pleasure of premiering the new live clip for ‘SSPPUUNNKK' - what’s the story?

HSD: Before we started tour these guys hit us up. They have this really nice studio set up in Brunswick and wanted us to do a live video there. We hadn't done one of those so we figured it would be fun. We wore really cool sunglasses which was made even cooler due to the fact we were inside. We chose ‘SSPPUUNNKK' coz it's a bit more heavy and broody than anything else on the album so we wanted to showcase that I guess. We were meant to do two, but my voice was fucked. Maybe #2 will happen. It was fun.

Better than the other ones. It's a much better album than the one that preceded it. It's a more upbeat record which definitely reflects Jake and my own musical backgrounds. Some guy told me it was his favourite, and the video from it got on RAGE, so there's definitely a sense of progression.

The band has also just relocated to Melbourne. Good thoughts?

Yeah its been good. People have been very warm and welcoming which made it a lot easier. Its a bigger city than Perth which naturally means there's more going on, and obviously Melbourne facilitates live music in a way that other Australian cities don't. It's cliche but true. Plus its nice to be over 25, play a gig and not feel old. I do love Perth though, I have a lot of great friends there and it does a lot of good things. It's just isolated.

The other day Jake told me he likes his coffee super hot so he can slowly sip on it, but I swear he only drank like a third of it. Weigh in please.

Jake: James is wrong. I like it lukewarm so I can drink it fast and straight away.

I don't know why he would have drunk only a third. He's the kinda guy that will eat the last few soggy bites of your kebab that you don't want, just for the sake of not wasting food. Economical, but gross.

What’s up next for Hideous Sun Demon?

We're recording an EP next month. I'm really excited for it. It's gonna be the first of four we're gonna do over the next year or so. Means we'll put out stuff faster. Then we might combine them to for a compilation which will effectively be our 4th album. Maybe. 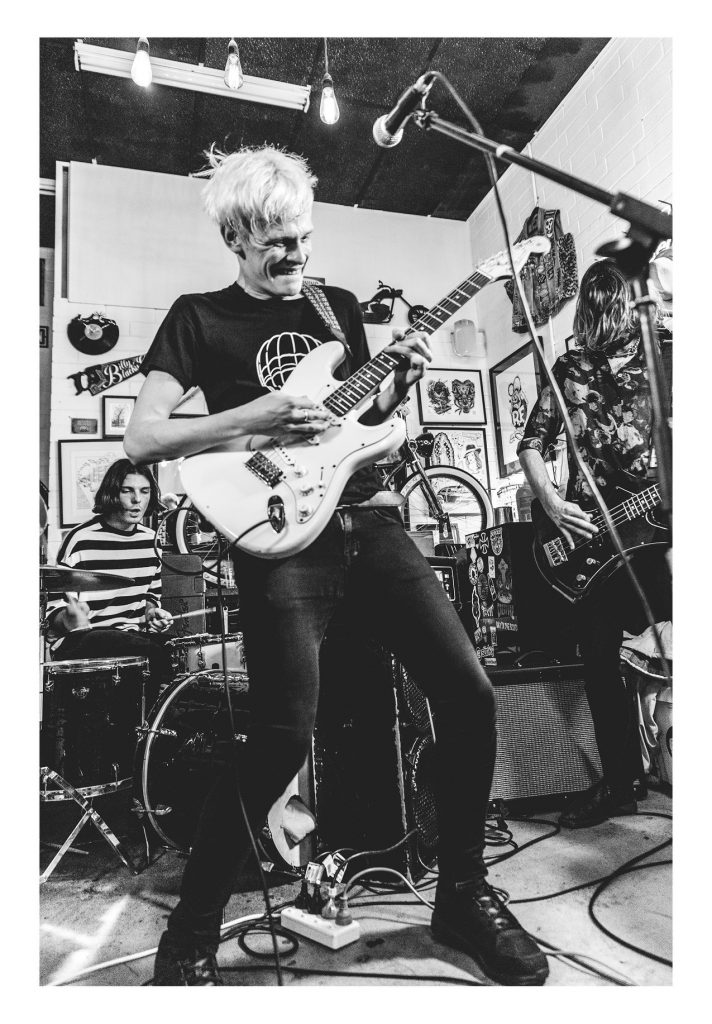