Skip to content
Music / Premieres
Video Premiere:
Syrup, Go On -
Don't Go (Riding Down The Cosmic Drain)
Words by James Lynch
Monday 29th April, 2019
We’re stoked to be premiering the brand new single and clip from Gold Coast dream-rock weirdos Syrup Go, On - ‘Don’t Go (Riding Down The Cosmic Drain)’ is a vibrant slice of immersive psychedelia with an accompanying video that injects the trip with an extra dose of weirdness.
Based on the Gold Coast, Syrup, Go On are a sextet who specialise in illuminative psych rock, which they describe as an “electrified Crosby, Stills & Nash” crossed with a “Phil Spector produced futuristic the Smiths”. Mind-warping to say the least, they dropped their official debut EP Joyful Hesitation in January last year, and now with a refined lineup, they’re back with ‘Don’t Go (Riding Down The Cosmic Drain)’, the first taste of their debut album due out in June through Brisbane’s Valley Heat Records.

Opening with some interweaving guitar chimes while a crisp rhythm section bubbles underneath, ‘Don’t Go’ is quickly sliced open as co-vocalist Liz Dick’s translucent voice cuts through the middle of the instrumentation, stealing the limelight with her impenetrable hooks. The track widens further as Tom Briese’s dreamy vocals beam into the mix, before Syrup, Go On hit us with an expansive chorus, made hypnotic by immersive harmonies that shine amongst the fluctuating guitar chords and bold drum rolls. The band allow us to drift back into the familiar briefly and the track bounces along, before the gears shift once again - however this time, the rug is pulled out from underneath and we free fall into a spaced-out soundscape. Immediately surrounded by fluttering synths and phosphorescent vocals, the shift has the effect of a dream, somehow feeling brand new and discernibly nostalgic at the same time. We’re brought back to earth with another chorus, this time more explosive than ever, until Syrup, Go On’s wall of noise and colour slowly fades away.

To accompany the single is a brand new video, directed by the band’s former drummer Ken Kimura. Matching the track’s surrealism and taking it up a notch, the clip finds a silver man trapped inside a sharehouse, while the band watch on, passive to the point that it’s eerie. As the track warps so does the man, and we’re subjected to some enthrallingly psychedelic imagery that perfectly pairs with the music, before the man makes a final bid to escape whatever it is that is shackling him. 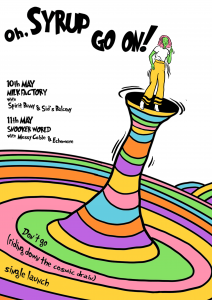 Check out the clip for 'Don't Go (Riding Down The Cosmic Drain)' above, and catch Syrup, Go On as they launch the new single on May 10th at The Milk Factory in Brisbane and May 11th at Snooker World on the Gold Coast.
syrupgoon.bandcamp.com
Syrup, Go On on Facebook
valleyheatrecords.bandcamp.com
Photos by Emily Puxty and Zak Henderson