Skip to content
Music / Premieres
Video Premiere:
The Oh Balters - She's On My Mind
Words by James Lynch
Friday 3rd May, 2019
Ahead of the release of their debut album next week, we’re stoked to premiere the brand new clip from local garage-rockers The Oh Balters - 'She’s On My Mind' is a burst of blues-tinged rock 'n' roll, and the new clip adds an extra layer of charm to the track with its freaked-out visuals.
Following on from a hectic 2018, which saw the band launch their debut EP Why Don’t You Save Me Now? at the beginning of the year before proceeding to jump aboard every local lineup possible, The Oh Balters are back and teasing us with hints of their forthcoming debut album Nobody’s Donkey, out next week. Last week they shared the first taste with the glorious 60s-pop of ‘Old Joke of Mine’, and they’re back at it again today with ‘She’s On My Mind.’

Following some subtle minor chord strums, 'She’s On My Mind' blasts open with a fuzzed out guitar lead as the band moves into a sinister blues stomp, backed by swampy bass and steady drums. The track drifts into the verse and the uneasy vibes continue, now propelled by guitarist Bert O’Loughlin’s warbled vocals, which come accompanied with a female voice which adds an eerie layer of light into the murkiness. That is, until The Oh Balters shift gear and hit us with the track’s contagious chorus, which picks up a classic rock ’n’ roll groove and Bert weaves some charming hooks over jangling guitars and a bouncing rhythm section. Constantly flipping between light and dark, the track coasts on until the band seemingly settle into one more buoyant chorus, just to catch us off guard with a striking horror-movie violin outro to send the song off.

Speaking about the track, Bert explains “It started with completely different lyrics, which to me seemed horribly corny and made up, except for one verse which was the one about flowers blooming and turning black and blue. That line seemed the most real so I gave a kind of colour theme as well and it sort of worked from there.” These themes are channelled through the new clip created by Eremaya Albrecht, which finds a surreal version of the band performing, wearing unnaturally oversized masks in a dark, shadowy room. As Bert explains ”in our friend Eremaya's debut clip, you can see she has toyed with light and shadow, allowing flashes of colour to momentarily burst through the monochrome.”

Despite the uncanny visuals and eerie vibes, the clip does well to show off the band’s playful personalities amongst the darkness, mirroring the dichotomy of the track. It’s a really impressive return for the band and points towards exciting things to come from the debut album, which drops next Thursday, May 10th. 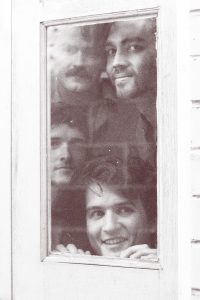 Check out 'She's On My Mind' above, and catch The Oh Balters as they launch their new album Nobody's Donkey on May 25th at Yah Yah's with The Slingers and pting.
theohbalters.bandcamp.com
The Oh Balters on Facebook
Nobody's Donkey Album Launch
Clip created by Eremaya Albrecht
Header photo by Mickey Mason
Lower photo by Ruby Healey