Skip to content
Music / Features
DIY or Don't —
Timi Temple on his DIY Mantra
Words by Timi Temple
Tuesday 27th August, 2019
Last week, Sydney noise-maker Timi Temple shared a brand new clip for his latest blast of colourful indie-rock, ’Tomorrow Is Yesterday’. Staunchly DIY, the clip was created with a mere $40 budget (half of which was spent on his suit), and now we’ve been given the chance to learn a little more about Timi’s creative vision, as he shares his inspiring ethos with us below.
I’m going to address the elephant in the room first - most people start with DIY out of necessity rather than passion. This was my case, though in my instance, I very quickly fell in love with the process of DIY and the freedom of execution and vision. Not all of us musicians have major label moolahh to blow on $10k cinematic music videos or cashola to drop new merch every single/tour/season. But it takes a special type of person to not throw in the towel against these cashed up giants, it takes a DOer, and thus I present to you DIY or DON’T.

Alright, so you’re going to send a swift middle finger salute to the big monies. Where do you start?

Documenting!! Not what you were expecting? Me neither!

We live in the day and age where everything is mass produced and mass processed. Us DIY’ers live on the outside of this fence, we’ve got our hand on everything, passion, love, blood, sweat, tears and your audience wants to see this! Would you prefer something a million other people have, or a merch piece unique only to you?? I’ll give you a great example, I make a bunch of my own merch! I released a song last year called ‘2pm For Breakfast’ and the merch for the single was plates and mugs. (Genius, I know...) I love snakes, so I painted a bunch of snakes all over the blank plates and mugs and then oven baked them myself. I made a video showing the whole process and saw engagement 10x more than just the “final product” image and a "go buy our merch” caption I see so many bands doing...

But how do I make blockbuster music videos?

Obviously, DIY can be a double-edged sword, there’s a bunch of things you can do, and a whole heap more that you can’t... BUT, this is where creativity is nurtured and grown, problem solving something that is locked behind a financial barrier.

We’ve all seen the cinematic music videos cut in a single take single shot. Gosh they look luscious!! I wanted in on this beauty for my track ‘Pretty Boy’... but I couldn’t afford a Hollywood set, or a rolling dolly 100m long or an expensive cinecamera/gimbal set up. Solution? I whipped up Gumtree and found a second hand wheelchair going for free. I got a friend to push me while I leant out the side of the wheelchair recording the scene. We found a road in Newtown that was newly paved, so it was super smooth too. The result? $0 budget single shot continuous music video.

Do I need the ‘insert expensive piece of gear’ to record music??

Finally, DIY’ing the music itself! Gone are days where you need to hire a multimillion-dollar studio just to record your song. Laptop, interface and any microphone and you’ve got yourself a perfectly fine rig... hell, some people even do everything on their iPhone! (Check out Steve Lacy if you don’t believe me) I was actually in a tour rehearsal session super recently with Peking Duk and the lads came up with a new acoustic guitar part for the bridge of their latest track ‘Ur Eyez’, and it was being mixed at the time, so they just threw out an iPhone on voice memo, recorded the acoustic and sent it off for mixing!! We’ve hit the point where technically, we can record things perfectly, so I think this DIY mentality helps shake things up and create new sounds and sonic possibilities... After all, we’re all just trying to make our own noise ultimately!

I think I’ll wrap it up it up with a great takeaway of doing things yourself, and that’s just simply “skills learnt”. Once you’ve figured out how to do a thing yourself, you can always rely on yourself to get the job done. 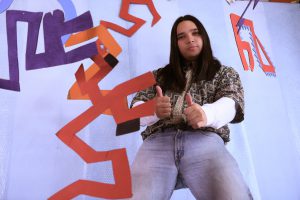 Check out the new clip for 'Tomorrow Is Yesterday' above, and you can catch Timi Temple over the next two weeks across the east coast, supporting Bootleg Rascal.
timitemple.com
Timi Temple on Facebook