Last month, paisley-pop rockers Parsnip shared their debut album When The Tree Bears Fruit, a collection of charmingly wide-eyed garage-rock mixed with glorious 60’s pop. After hitting Sydney this weekend, they’ll be launching the album at the Northcote Social Club next Friday, with Geelong psychos UV Race lending a hand on the night with their off-kilter garage-punk. While the conversation didn’t really go that way, we listened in on a chat between the two bands to see if we could figure out what might go down at the upcoming show.
Marcus (UV Race): I have only had roasted parsnip - how else should I enjoy this underrated vegetable?

Carolyn (Parsnip): Hi Marcus! Okay I really wasn’t sure about this as I’m not much of a parsnip connoisseur, however you can apparently make hash browns out of them, make soup, stew them, even make parsnip wine!

Bec (Parsnip): Use them as witchy finger props.

Paris (Parsnip): Well - I’m not that exciting, I just steam ‘em and chuck some ghee and dill on top, but yeah roasting is where it’s at. They can come in all kinds of weird shapes and sizes heh, so just picking them out in the first place is half the fun…

Marcus: The Uv Race hasn’t played the Northcote Social Club. What should we expect?

Paris: It’s an honour to have you inducted into tha clurb with us! Considering we’ll be in good company with Sweet Whirl, DJ Billy and yourselves, it’s likely the crowd should be in high spirits too! Or even just high!

Carolyn: Oooh very topical! I’m a bit late to the game with PBOTD. Bec is the official Social Media Guru at Parsnip HQ, I’ll let her field that one.

Bec: Some of the posts make me chuckle for sure, but mostly I just cringe at the content that is centred around straight, white people complaining about how hard dating and living in Brunswick is.

Marcus: What do you think Melbourne should be known for? Other than its music and arts scene.

Bec: There were once salt water dolphins that lived in the Maribyrnong river! Let it be known!

Marcus: Are there any pre-set routines you have?

Marcus: What would one thing would you put on the rider that is ridiculous?

Carolyn: A jumping castle would be really good.

Marcus: What are you watching at the moment?

Bec: To get the mind racing - Handmaid's Tale. To tune out - Queer Eye.

Paris: JESUS CHRIST IN RICHMOND PARK: ORIGINAL UPLOAD on Youtube. And photos of Potoo birds if that counts.

Carolyn: We played our first show in the living room of a house in Northcote that Stella and I used to live in together. It was Parsnip and Traffik Island - a very enjoyable afternoon.

Bec: The first Parsnip gig was with another awesome keys player that I later replaced so I can only offer a fictional answer, which is crammed on a hot air balloon that only rises infinitely, never landing back to the ground. The foldbacks weren’t great.

Paris: …we then made a pit stop on Asteroid B 612, and shredded through 43 sunsets, which occur more frequently than on earth but also resulted in many sleepless nights.

Stella: I mean, I guess all of the above haha.

Marcus: What instrument do you want to be able to play but don’t at the moment?

Paris: We should get some multi-neck rigs going.

Stella: Harp. Or I’d like to learn how to code - not really an instrument… but would be a sick skill to have!

Carolyn: I’m gonna steal one of your questions and ask where the first UV gig was? Again, fact or fiction accepted.

Marcus: Batman Park Community Hall Northcote. There is Youtube footage of it.

Carolyn: I’ve seen you wear some pretty awesome costumes over the years at UV Race shows. Where do you get your inspiration? Anything planned for the NSC show?

Marcus: Friends and op shops are my inspiration. Nothing planned but open to suggestions.

Carolyn: What is the last dream you can remember?

Marcus: Al’s brother Ben was moving and his crocs broke in half. Al had a million pairs of shoes for Ben to pick from.

Bec: What is your go-to midnight snack?

Marcus: When I worked at Mount Baw Baw, we would come home from the pub and cook sausages. Thinking back it was probably not the best idea but delicious.

Bec: What is your favourite sound, musical or otherwise?

Marcus: I really like the sound of popping bubble-wrap. Also, any sound that guy on Police Academy makes.

Paris: We have plenty of rock dogs roaming around Melbourne but tell me, how does one become a rock GOD?

Paris: If you had a theme song that played whenever you entered the room, what would it be?

Marcus: No, but that would be a good mild super power to have.

Stella: What is your favourite UV Race song? 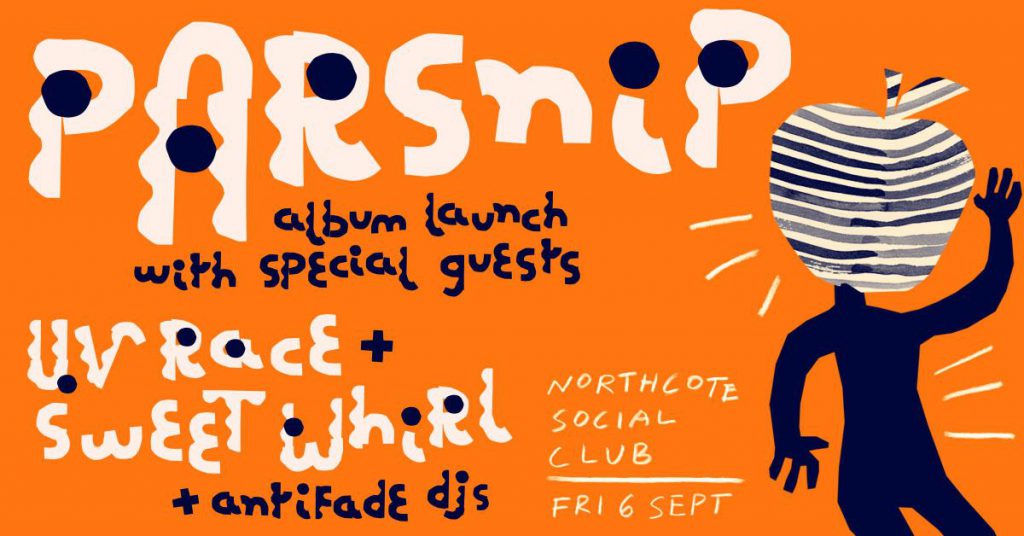