Skip to content
Music / Features
Not From Around Here -
A Chat with Horace Bones
Words and interview by Minnie Dunn
Wednesday 9th October, 2019

Talking to Oisin Kelly and Danny Cockburn was uncomplicated and tender. They possess a gracefulness and sincerity that is showing itself more and more in my adult friendships, like the unlikely sprouting of golden wattle through concrete.

Discussing the search for community amidst the isolating fringes of human experience, we were able to unpack the benefits of healthy expressions of aggression, light cigarettes off old candles, and talk all things Terra. A naturally gothic succession from the band's earlier work, their first album combines in-depth storytelling with dark tones and unhinged instrumentation, resulting in an ominousness that is becoming distinct to Horace Bones.
Minnie: Oisin, Terra has a tessellating theme of feeling culturally bereft. Do you think coming to Australia from Ireland as a kid has influenced you to see the Australian social-political landscape through more of an observational lens?

Oisin (vocals): It does touch on politics but it’s more of the experience of being Australian, especially white Australian, and the identity crisis of it. There was a poignant moment in my youth where our class was made to design an Australian bank note, some stupid culinary thing, and my teacher apparently liked the design I came up with, telling me, “quite often the people looking in as outsiders, can see the whole of something better than the people on the inside”. I remember thinking “but I am Australian?” I realized that even then, being Irish was considered exotic. God forbid if I had slightly different coloured skin. I grew up mostly around Irish people and as we got older the comments and feelings of being an outsider became more discrete.

M: As an adult, have you found your community here in Australia? Your tribe?

O: I thought I had but last year I went to Uluru. I wanted to go up there and see the land. I wanted to feel proud and to feel like I had something I could be part of but I just had this kick in the guts – this isn’t mine at all, this is stolen land. I’m here to observe it.

M: You guys do the Acknowledgment of Country at the start of your shows, have you ever copped any heckles or harassment from the more narrow-minded nooks of the music scene?

O: I’m not sure if it’s the music scene but from punters, yeah. They heckle, they shout. There was a man in Bendigo who leaned in and said “you’re a fucking fraud”. We hadn’t sung a note yet. Spit came from his mouth as he spoke to me and he tried to beat the shit outta me while I was on stage, half way through our set.

M: Despite being punched in the guts that would have provoked a lot of personal and on-stage insecurities, right?

O: Yeah it did, especially when you’re putting yourself out there, being vulnerable. These songs I’ve written, they’re so much more personal than the other stuff. 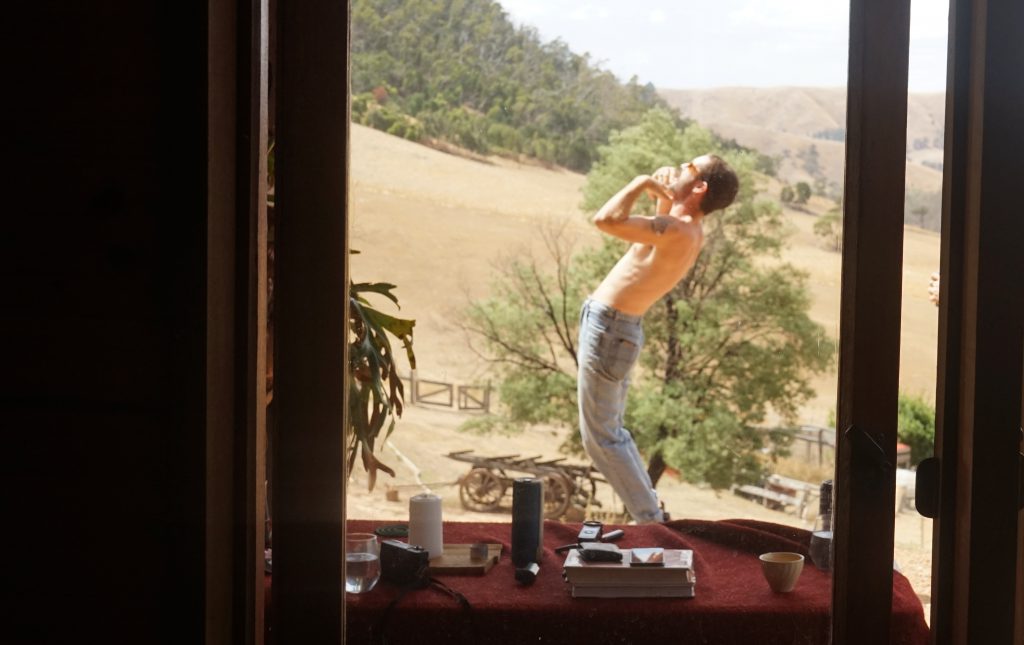 M: There’s a fine line between that type of aggression and the performed expected aggression of the music. How do you combat the distinction?

O: I keep one eye on the crowd now, and one involved in what I’m doing… I bring it on myself. I like the energy, it’s dangerous. Everyone’s got this existential rage in them and they need to get rid of it in healthy ways otherwise it could be destructive. Myself included. It’s an outlet, and people need it.

Danny (bass): Yeah, we’ve done a lot of gigs where people don’t understand what’s going on, misinterpret things, not even listening – they just hear angry, loud music that’s violent and visceral, but it’s violent sounding music that’s against hate. Young men have a lot of rage in them. You’re not going to get rid of that.

M: Is it important to create a safe space for a diverse crowd to unbridle themselves, to channel the hostility?

D: Do you know the only difference between metal-heads and punks?

D: Shampoo.
M: [Laughs] Although Terra feels like it addresses much larger issues and stories than just being a general ‘misfit’, do you think that the phenomenon of feeling like an outcast has influenced the record?

D: As young men we’ve got all this privilege and the world at our feet, but once you acknowledge that you haven’t earned it, that you might not deserve it, with it comes this feeling of unworthiness, an imposter syndrome. Same in social situations, thinking do I belong here? Do these people like me? What am I doing here? An uncertainty of identity that’s in a way, the feeling of not fitting in.

M: Has Terra perpetuated this feeling of imposter syndrome or is it different now because you have something you can believe in?

D: Definitely. Even as little as someone showing up to a show and knowing the lyrics, or cross-stitching some of our lyrics and gifting it to us helps you realise that the record isn’t mine anymore, this music isn’t ours. It’s not about us feeling like we’re not playing well enough, it’s about the product, believing in the product. It’s made me separate myself and just focus on connecting to people that give a shit. It’s for them I guess.

M: Terra has such a distinct narrative component in terms of the individual songs playing out like micro-stories. Can you tell us a little bit about the song ‘Squall’?

O: It is in a way, a love song. It’s on the end of the album to possibly end the intensity of the aggression, the craziness, to bring someone back from the hostility of Horace Bones.

M: A love song but also a murder ballad?

O: [Laughs] Yeah well, it’s a Horace Bones song, so it’s not gonna’ be beer and skittles, gotta’ have someone die in it. It’s a true story and one of the two most vulnerable songs I’ve ever written, the other being ‘Not From Around Here’ and that was premeditated - I was sick of the inability to open up. This was an exercise in trying to be real, and not just the horror stuff. I was turning 30. I needed to be more open to myself and not just talk about fictional characters. ‘Squall’ is about the Australian landscape in conjunction to the psyche, trying to capture the harsh climate while telling the story of when my mother took my brother and I to stay at a Caravan park when we were kids where I befriended a girl who had disappeared one day. I vaguely remember her father being heavily questioned by the police. I, myself, was also questioned. I wanted to write a song that included the coast, but this wasn’t going to be a Jack Johnson, there was the intention to involve the broodiness, the white caps, the stormy ocean, seagulls getting knocked around by the wind. The squall. Just sitting down with a guitar unlocked the memory of what happened upon that weekend we spent, in winter, around the beach.

M: On recording a live studio album in Flowerdale, did you feel a sense of community there, with the band, a kinship?

O: Yeah! Absolutely. Nine days and nights in the same quarters, sharing beds and bunks, you’re in each other - in breaks and in between meals you sit outside and play each other music and share the experience. When you’re in the microcosm, that bubble, the barriers come down.

M: Who’s idea was it to record live to tape?

O: I think all of us, it’s how we sound, it’s how we have to record, and we’re messy. When recording live to tape, you’re getting the pops and whistles, the birds flying around, that’s all a part of it. At the end of side A, on ‘Mercy Bullet’, which is this big palatial, spacious song, you flip it over and next you hear this rough atmos of a door closing initiating this intimate song. Couldn’t have done it any other way.

M: ‘Mercy Bullet’ is another one of the songs off the album that’s a call to narrative. Is that non-fiction too?

O: ‘Mercy Bullet’ is one of my nearest and dearest tracks because of the musicality of it. I was proud of how unique it was. It’s not an easy listen, it’s disjointed, it leaps around, sort of self-indulgently. We didn’t want to make it an easy listen. I wanted to write a feminine hero, something that spoke to the drought and dryness and desperation that comes from living in Australia in this harsh climate. A dust-bowly, depression sort of music. Coming up with the idea of ‘Mercy Bullet’, I thought it interesting as a writer to use another song’s framework to pitch my own story. It’s about a woman on a farm, desperate from the great depression and drought, and the only way she can see fit to provide relief for her family is to kill them and then herself in this monstrous drought - “three hungry mouths to feed, but all you’ve got left, three mercy bullets in your pocket, I see three hard wind blow, as the shotgun goes, across the land, across the fields, into the sky, as hard rain starts to fall”. 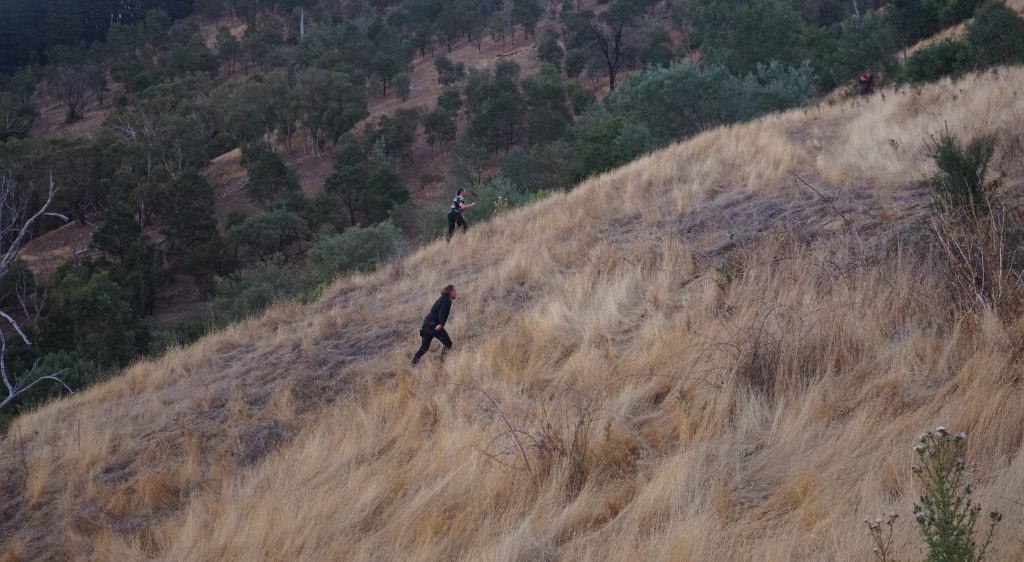 Oisin reaches in and out of his lyrics when I probe him for meaning, evidence of the difficulty in describing one’s own poetry. It’s beyond personal, and beyond mathematical attempts at delineation like the disappointment in reporting a dream. However, to the poets and musicians the intimate understanding of sound is enough.

I have Terra on vinyl, and since my initial opening of that book, it’s become the newest addition to the small collection of tangible belongings I would fetch en route through house fire.
Terra is out now. Horace Bones play Weird Place Fest 3 next Saturday, October 19th, at The Tote.
horacebonesband.bandcamp.com
Photography by Joel Frew