Skip to content
Music / Premieres
Premiere:
Soft Rubbish - 1999
Words and interview by James Lynch
Friday 11th October, 2019
Today we have the pleasure of premiering the brand new single from Melbourne four-piece Soft Rubbish - ‘1999’ is a turbulent blast of invigorating post-punk that doubles as an impassioned cry against the toxicity of today’s culture.
Following on from this year’s previous singles ‘Not In The Game’ and ‘The Rings’, Soft Rubbish have returned with ‘1999’, another dose of their heady amalgamation of punk and psychedelia, and a thrilling taste of their upcoming album.

After opening with a mesmerising guitar, ‘1999’ quickly settles into a restless groove, pushed along by a propulsive backbeat while the swirling guitars intertwine and collide. Moments later, vocalist/guitarist Julie Montan takes the limelight with her captivating voice - weaving a dynamic melody through the sprawling instrumentation, there’s a thoughtful fury behind her words, the impact of each lyric becoming more striking than the last. While the otherworldly layers of sound continue to spiral around us, we’re immersed in the amounting force of Julie’s performance, and as the track erupts with the final cries of “somebody please wake me when it’s 1999’, it’s hard not to feel completely lost in the moment, regardless of the year.

However, we’re only just scratching the surface, because there is far more meaning to be found beneath the intoxicating layers of sound. To learn a little more about the context of the track, we got in touch with Julie to have her pull back the curtain on ‘1999’.


TJ: Hey Julie, tell us a bit about Soft Rubbish.

SR: I find it very hard to generalise and summarise myself or the entity that is SR because we’re a band - we play music - and that’s a very basic thing on the surface. But we’re not very surface. Scratch us and our personal, political, spiritual and planetary worldview erupts! And if you are afraid of heat caused by fire of full frontal honesty then you’d better run. We’re not a band of wallflowers, put it that way.

I started SR in 2015 as a solo project and we became a four piece about 2 years ago. This fact of becoming a four piece made SR a much louder and more ferocious iteration of 2015’s more intimate and immediate personification of ‘action-reaction’ to the absolute shit storm of the current moment of ‘the demise of society and culture’ as I have perceived it. The noise we are making has never been more beautiful or frightening because our truth is that we give ‘zero fucks’ about what you or anyone else thinks of us. We aren’t actors in a post-rock-punk-grunge pantomime, even though the PR and marketing bands must suffer would suggest otherwise. No, ours is a much darker humour and a flipped middle finger to the corporatisation of artists and their art. Whether in 1974, 1999 or 2019 punks have always refused and resisted commodification. But hearing myself say this reminds me that every song I write, and the energy I bring to performance is basically me holding back tears, but also I’m holding fast - to myself - otherwise I’d be running a million miles away from this shit storm called life. But I’m not running, I have to be here. I have a daughter, I am her role model and I’m modelling a kind of ‘hero mother’, not a coward or a victim because my daughter and her generation are gonna inherit this shit storm once I’m gone and I want her to know how to navigate this docile, facile ‘market place’ that life has become.

These songs are my weapons, they are poems I have literally bled for; written and performed with heart, humanity and soul. I sound like the biggest drama queen I know but as I said, I don’t give a fuck what you or anyone thinks - this is my truth. 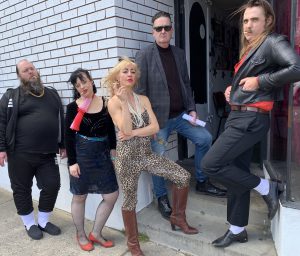 We've just had a pleasure of premiering your new single ‘1999’. You’ve mentioned the track is a “song of disgust at the clusterfuck of life in 2019” - could you share a bit about how the song was written?

Lol it’s a long story, but the song itself was written quickly. One of those tunes that just comes out. At the time of writing I felt sympathy with Prince. When Prince wrote ‘1999’, the world was on the verge of geo-political collapse and while Prince’s ‘1999’ is a rejoinder to the threat of nuclear war and tyrants running - no, ruining - the beauty of life and the best parts of being alive i.e community, family, love, sexuality and joy, I wrote a riff in response to the ecstatic party Prince bequeathed us, but with lyrics that are much darker. My ‘1999’ is not so much ‘a party at the end of the world’, but a twisted self-reckoning of how absurd we as a community have become. We’re not cool like people were in Prince’s milieu. We’re embarrassing. We’ve become a parody of a parody and that’s largely due to bullshit world leaders who aren’t fit to lead two sheep let alone countries - also social media, identity politics and the petty fighting among people who essentially all want the same thing: to be seen and heard; to be loved, and if we’re not careful that pettiness will be the death of us.

There’s a bit of a crazy story that surrounds the release of this single, care to share?

I mentioned in our earlier exchange that we will not be releasing the video clip until it is ready (sometime in November) and unfortunately that will not coincide - as is the norm - before or in time with the single launch. We are breaking with tradition this time because it's more important to Soft Rubbish that we are true to our vision - which is to launch ‘1999’ on the anniversary day that Prince released 1999, rather than conform to what the music industry usually expects from a band releasing a single. Our band - our rules! We know how a release is ‘meant’ to roll out but we don't care - we're gonna do it our way. It takes the pressure off, there's no head-fuck or mad rush because when you break it down, the whole process of releasing a record, or a single, should be fun! But the sad irony is that it’s hard to have fun when you’re constantly chasing deadlines and making ends meet. Deadlines don’t align with the reality facing many independent musicians and artists and that reality is we have to live! We can't afford publicists or managers, nor have we grants or enough funding to press our own records and the chance of finding a label is so minuscule that artists have no choice but to self release.

In my case, I'm a student, a parent and as I've been an artist my whole working life I've never made a single dollar from my vocation. At 45 years of age, I'm working with the best talent there is - both old and new - from veterans like Alan Brough, Sam Orchard, Phoebe Powell, Marisa Zamora, John Lee, Robin Waters, David Walker, Monika Fikerle, Joe Foley, Mat Sincock, Renato Vacirca and a supporting cast of so many incredibly talented and generous artists from Melbourne, Sydney, and Canberra who have donated their time and effort to help me realise this project.

With the wisdom of hindsight I know how to make more friends than enemies in the local scene, and that is by treating every body with the utmost respect and not forcing untenable deadlines on them just to suit the production line imposed by a disembodied phantom that is the music industry - which doesn't give an actual shit about the artists who support its very existence! I'd rather work by rules that suit and complement us and are achievable given our real life situations. You attract more bees with honey as the saying goes, and my colleagues who are all as passionate and dedicated as me, are working their guts out to make ends meet, with so little time to scratch themselves. I am affording them the time and space to deliver this music video so that they feel proud of it, have ownership over it and feel proud putting their names to it. We're all so sick of rushing in the clusterfuck of life, as I'm sure you are James, so I'm happy to wait, I hope you and your readers/listeners are too.

You’re also in the thick of making a video clip for the track, which will be out next month. What can you reveal about the clip so far?

Our music video is a slapstick, black comedy that centres around a suburban Italian girl (played by me) and the domestic struggles she experiences living with her Nonna (played by Alan Brough of Spicks & Specks fame) and how the generation gap affects their ability to understand one another. It’s a very layered, fast moving narrative which I won’t go into now, you’ll have to wait and see it, but its underlying message is underpinned by a political phenomenon. An ‘ageist view’ projected by the music industry on ‘young talent’, and by virtue of what I call the 'youth gaze' - which displaces older artists from possessing an evolving 'hotness' or relevance, and unwittingly de-prioritises older artists as ‘has beens’ or ageing rockstars. My point is that musicians don't suddenly become obsolete or 'not hot' after the age of 40!

‘1999’ is set in 2019 but its references are anachronistic; such as the moral panic of the late nineties with the forecast of the Y2K Bug and the apocalypse. It is also a parable/metaphor on the demise of 'the moment’ as a perfectly lived experience; 'the moment' that since the advent of the smartphone camera, can’t be ‘experienced’ without 'fear of that moment' being lost forever. This is symbolised by the orgy/mosh pit of photographers shooting us at a gig like it will be 'the end of the world' if they don't get the ‘ultimate shot’. It’s also referencing memory and time and the irony that by photographing every moment, the moment is both captured and lost simultaneously. There is also a message that suggests 'commodification of young hot talent' is the antithesis of the true purpose of making art/rock n roll in the first place, and as I said earlier whether it's 1974, 1999 or 2019 punks have always resisted capitalisms stronghold over artists and their art.

Finally, the ultimate message is Nonna’s generation isn't entirely stupid or obsolete. Times change and so does culture and society but older people don’t suddenly become invalid because a new ‘hot young thing’ or 'idea' or 'deal' comes along. We’re sated by Nonna’s offering of wholesome and wise meatballs (spoiler alert), and reminded that sometimes older generations 'do know best'. We are all valid, eternally relevant - relevant as a future memory experienced in the undocumented, uncorrupted moment itself.

Your single launch is creeping up - any idea what we can expect from the show?

We’re playing with a band called Not Quite White. They call themselves a quiet punk band and they’re whole schtick is that they aren’t allowed to be good at their instruments. They swap instruments for every song, the idea being to ‘create’, not to ‘repeat’. There’s nothing cliche about it. They’re very cheeky and very saucy too, and our friend Richie 1250 will be playing the whole of Prince’s double album 1999. But the thing that is most special is that it’s 37 years to the day, October 27 1982, Prince released his 1999 and for obvious reasons that will make this show a real celebration.

What else is coming up for Soft Rubbish?

We’re launching the album next year and until then we’ll be kind and loving and creative and continue to make more friends than enemies by not being assholes about how we produce music in the local scene. That’s about it!

Lose yourself in '1999' above, and catch Soft Rubbish launching the single on Sunday, October 27th, at the Old Bar.
softrubbish.bandcamp.com
Soft Rubbish on Facebook
'1999' Single Launch