Skip to content
Music / Features
Track by Track:
Nick Griffith - 7am
Words by James Lynch
Thursday 19th March, 2020
Ahead of the release of his debut album, out tomorrow through Dinosaur City Records, we had bedroom-pop mastermind Nick Griffith talk us through the dizzyingly playful world of 7am.
Recognisable as a member of loved Sydney bands Big White, High-tails and Dream Dog, Nick Griffith has spent the better part of the last decade crafting some of Sydney’s most charming guitar music. Stepping out on his own for the first time, his debut solo album finds him bouncing between wacky indie-rock, left-field electro and immersive psych-pop, tied together by some hazy lo-fi production and his undeniable charisma.

Opening with the infectious jangle of ‘Riding On My Bike’, we’re instantly hooked as guitars warble next to gleaming synths while Nick’s affable vocals cut straight down the middle. However, despite being a killer opening track, it’s a little bit of a misdirection - where we might expect Nick to dig deeper into indie-rock territory, he throws a curveball and leans into electronics for the rest of the record.

Next up is ‘Dreamweaver’, a dose of wide-eyed dance-pop, dense with bright synths and sunny hooks over a jittering backbeat, and ‘Back and Forth’ is even more thrilling, with an instrumental that wouldn’t feel out of place in a computer game mixed with some glorious falsetto vocals.

If the tone has been set so far, it’s that the album’s main staple is unpredictability - from the tender soft-pop on ’Broken’, with its Beach Boys-esque vocal delivery and pensive synth strings, to the electro-pop stomp of ‘Fantasy’, through to the confusingly mesmerising sound-collage of the title track. And to round out the album, Nick reverts back to his pop-smarts (with some help from Tuffence Meringue) to craft ‘I Wanna Dance A Lot’, a track that instills us with the same desire thanks to the addictive nature of its synthetic afro-beat backdrop and easy-going hooks.

What holds 7am together is that at the core of each track is a beguiling songwriter who isn’t afraid to take risks, which makes listening along as disorientating as it is enjoyable. To dig a little deeper, we had Nick give us the inside scoop on 7am, one track at a time. 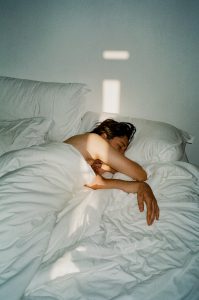 Riding On My Bike

I wrote this song after returning from tour in Europe with Big White. The highlight for me was the day we spent cycling through the streets and countryside of Haarlem, Netherlands. Coming back to Sydney I was inspired to buy a bike and pursue my newfound passion but quickly discovered the attitude of drivers, pedestrians and police towards cyclists was unkind and intolerant whilst the roads felt unsafe and lacked infrastructure. Frustrated, I wrote this song as an anthem for like minded cyclists wanting to break free and be proud as someone as someone actively taking steps (or pedals) towards a healthier environment.

Sitting in a park in the city on a summer evening, I penned the lyrics to this song. I’d had the riff in my head for ages and there were words and melodies coming to mind. It’s about asking someone to humour you as you stumble into love.

Capturing the motion sickness of my early twenties, ‘Back and Forth’ is the way I travelled, the way I spoke, the way I partied and where I woke. Getting tired, getting sick, getting over it and getting back on it.

I’d been listening to a lot of Dionne Warwrick and was always moved by how strongly her voice could convey the feeling of helplessness and despair. I think this song draws a lot from that emotion which is very raw and human.
Have a listen to 7am above, and head to dinosaurcityrecords.bandcamp.com to purchase the new album on a limited yellow cassette. Catch Nick launching 7am on Saturday, April 18th, at the Lady Hampshire, with Superchorus and Tuffence Meringue.
nickgriffithmusic.bandcamp.com
Nick Griffith on Facebook
7am Album Launch
Photos by Sophie McComish