Skip to content
Visuals / Irregulars
A Matter of Sex & Death -
A Chat With Filmmaker Kathleen Lee
Words and interview by Conor Lochrie
Thursday 16th April, 2020
Sex & Death, the brand new web series created by Kathleen Lee, is an exploration of love, heartache and self-realisation, and perhaps the perfect Australian show to binge during this lockdown period. We had the pleasure of chatting with Kathleen about writing, directing and starring in a series based on her own life.
Netflix will stop at nothing until our cultural intake is completely homogenous. Their latest attempt is a ludicrous documentary about big cat breeding - the streaming behemoth knows that quarantine has trapped us further, made it easier for them to bend us to their will. Alternatives are out there, though, and inoculation is available closer to home that one might expect.

Created by the wonderful Kathleen Lee, Sex and Death is a six-part web series that debuted online in March. Filled with fascinating and eccentric characters - both neurodiverse and neurotypical - it’s Kathleen's semi-autobiographical exploration of love, heartache, and self-realisation, and made by some of the finest talent in this city’s filmmaking industry, is set entirely in Melbourne.

Sex & Death will feel warmly relatable to anyone in their complex 20’s, navigating the trickiness of relationships and careers. At once generously comedic and innately dramatic, the show presents itself as the perfect opportunity to support Melbourne’s arts under lockdown. We caught up with Kathleen to delve deeper into the making of the show, the story’s narrative, and her future artistic plans.
TJ: Charlie, played by you, is our protagonist. Tell us about her story.

KL: Charlie is an acting student in her mid twenties who happily lives in the shadows of her best friend and boyfriend. When she meets someone similar to her at the local chicken shop she is challenged to stop hiding herself from her friends.

Sex & Death was made before you were officially diagnosed with Autism Spectrum Disorder and can be seen then as your attempt to come to terms with how you were feeling without having the definite words to express it. Have you watched the show back since your diagnosis? What was the sensation of that like?

Since being diagnosed, learning how completely and complexly ASD has affected my life has been a slow process. Looking back at the script I wrote before I knew I was autistic, it seems obvious that it is about someone trying to figure out how they can be true to themselves and the people around them when they are different and don’t fit in. At the time, I could not have expressed it like that or understood it like that - which is why I made a story about it.

A lot of the neurotypical characters surrounding Charlie appear purposefully overblown and chaotic - was this done to capture what it can be like to feel out of place around such people?

Neurotypical people, whilst making very little sense to me, have been my life’s obsession. I love trying to figure out how they work; they are like unsolvable cryptic puzzles to me. I particularly love people with big personalities and very little self-awareness because they are the most likely to share their thoughts and feelings in unfiltered ways, making them excellent specimens for my life long study of how people work. The characters of Tanya and Damian are depictions of how much I enjoy and love these kinds of people. 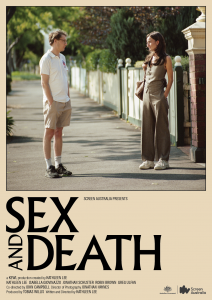 There’s a wonderful line in episode two, when Charlie is at her audition and is asked to describe herself. She uses the phrase “I like going for long walks, not at sunset but right after sunset” and that seems a perfect encapsulation of Charlie in the show? Not quite the same, just left of centre.

Yeah I like that. I didn’t think of it that way but that’s nice.

I watched your previous short film Bush Trip and was struck by its similarities to Sex & Death. In it your character reluctantly joins in on her friend’s drug trip and has to rein herself back when the things and people around her get too hectic - it really feels like a precursor to Sex & Death in this way, a ‘Psychedelic Country’ version of it.

Yes, I seem to always explore the same four character archetypes, altering them only slightly each time. My next project also has the same four kinds of characters. I like doing that. Each new iteration delves a bit deeper in a new direction.

The small size of the core cast feels just right and really allows for the two relationships - the quiet, sensitive Pat and Charlie opposite the confident and exuberant Tanya and Damian - to mirror each other well. How did the cast come together? Did you all go to film school with one another?

Isabella Giovinazzo went to film school with me and I started casting her in my films in 2013. The first time I worked with her felt like my first real directing experience. She understood the emotion of each scene so well and it felt like magic directing her. I usually like to cast her as the emotional lead but I knew I had to be that this time and I knew she’d nail Tanya.

I knew of Schuster through friends of friends, he is a local Melbourne comedian and I could sense that he had a bit of ‘Pat’ in him. We asked him to come in for a read through and then a chemistry test to see if we worked well on screen together and then offered him the part. He was so well suited to the role of Pat that now I can’t remember how I imagined the character before it was him.

Damian was the only lead that we did a casting call for. We loved Robin’s audition and felt he really got the part - he was excellent and highly professional to work with. 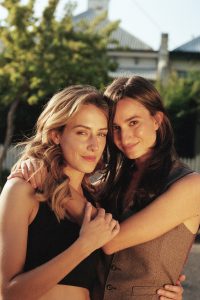 You’ve called Sex & Death a semi-autobiographical series. How much, then, comes from your lived experience and what aspects are embellished?

It’s all embellished, even the “real” bits. To tell particular aspects of the story I had to distill what was real to fit it into tiny little scenes. That’s why I love doing it. You get to pick what you think is beautiful about life and craft the story to enhance and build up to those moments.

The intimacy of the filmmaking was wonderful, allowing for the sharp dialogue to affect the viewer. Did you prefer being in front of or behind the camera?

I really enjoyed the recurrence of Charlie’s rehearsal for Uncle Vanya. When we don’t fit in properly in real life it can feel like we’re going through the motions, just acting normal, as if it were just a play.

I think Charlie often is “acting” to a certain extent in her real life. She is avoiding revealing her natural reactions and inclinations. The reason she has enjoyed acting on stage up to this point is because it is a chance to fully encompass another person and not have to pretend that you are being yourself. However Greg is challenging her to be “real” which is something she has avoided being her whole life. So Charlie’s acting classes become even more challenging than real life - as opposed to the escape that they formerly were.

Being primarily a music publication, it would be remiss to not ask about your affinity with that art form! I noticed that you’ve released music in the past - do you foresee a return to music away from filmmaking in the future?

I have been on and off working on a second EP for the last couple of years. Recording it mostly in my bedroom and then playing around with some synth sounds as well. I also went down to Tassie and did some recording of it with Jethro Pickett late last year. I’m thinking of releasing it soon - I just need to decide on a final sound and bring it all together.

Your songs have a beautifully plaintive quality to them, reminiscent of Laura Marling or Leonard Cohen. Sex & Death, conversely, is a comedic piece. Did you enjoy the freedom that filmmaking afforded you try this?

Film and music have always been very polar expressions for me. I have always oscillated between the urge to be a part of the world and the urge to run away and be alone. The first urge makes me want to make films - my films are usually celebrations of people and full of humour and absurdity. The second urge is when I make music, my music is usually about pain and loneliness. Both forms, although different, are just as much about love as the other, the joy of being a part of the world and the pain of not being able to.

Some excellent Australian bands - Sunbeam Sound Machine to name just one - feature in the soundtrack to the show. How did those collaborations come around?

All of the music I’ve used, except for the very final Grand Salvo track, is the music of friends or musicians I have worked with.

Nick (Sunbeam Sound Machine) is my boyfriend’s old housemate and I actually live in his old room now. Coincidently, Tobias, the producer of Sex & Death, and Nolan who made the music in the party scene, have also both lived in this same room at some point; I’m sitting in it right now actually.

Sister Socrates, who wrote the song from episode 2, is the project of Adam Dean, an old friend. The track we used is from their self-titled album, and I actually shot a video for another song from the album - it is an excellent album.

Mouth Tooth (ep 3) are a beautiful band and I am friends with one of the members and vocalist, Rhys, who is another Melbourne filmmaker.

Christopher Coleman (ep 4) is an old friend and brilliant Australian songwriter. We’ve collaborated many times over the years - he sings on 'The Goodbye Song' on my first EP and I’ve made several music videos for him.

Vanderlay (ep 5) are an excellent Melbourne folk band, I played my first ever show supporting them. Mount Saint Leonard (also ep 5) is a band I formed a few years ago and the song is actually about the guy that the character of Pat is based on.

Then, although I don’t know Grand Salvo (ep 6), I have listened to him for years and was honoured that he let us use ‘In The Water’ - a masterpiece.

With everyone under lockdown currently, a show like Sex & Death is perfect escape material. In just a sentence, how would you sell it to a potential quarantined viewer?

Maybe: “An offbeat rom-com about the entangled love lives of four friends, set where you wish you could be right now: out and about in Fitzroy North."

And finally, to the future - you’re planning on writing another show explicitly exploring life with ASD after diagnosis? That should make for a fascinating comparison with Sex & Death!

Yes, elements of it will be a fair bit darker than Sex & Death, and ironically, it will have more sex in it than Sex & Death - which actually had none. However, the character dynamics will be similar and I hope to keep the same level of warmth and absurdity that we captured in Sex & Death.
Sex & Death is out now - watch all six episodes here.
sexanddeath.online
kewl.studio