Skip to content
Music / Features
Homebodies -
Staying In with Psychic Hysteria
Words by James Lynch
Tuesday 12th May, 2020
Now a couple of months into lockdown life, we’ve taken a moment to check in on some of our favourite locals to find out how they’re spending their time in isolation.

Kurt Eckardt runs Psychic Hysteria, a small-run record and zine label, with an overarching focus of genuinely supporting the artists they work with and positively giving back to their community. With a tireless work ethic and a love for all things DIY, it’s no surprise that the label has been responsible for some of the most interesting and refreshing punk music to come out of Melbourne in recent years.
What are you watching?
I've started re-watching The X-Files. Again. I've also gotten back into watching the best show that has ever been made - Running Man. It's a South Korean variety show that Kalindy and I started watching a few years ago and we both became obsessed, I even have some bootleg merch from it. It's super fun, and because it's really fast paced and has subtitles, it actually makes you stop everything else you're doing like working or scrolling on your phone, which is nice.
What are you listening to?
I have mostly been listening to local music. I recently started co-hosting a radio show on PBS which is all Australian/NZ music. I mean chicken vs egg as I'm almost always listening to local bands, but it's meant that on top of my general listening for leisure, I'm also spending around eight hours a week listening to new music that we've been sent, scouring the world for more, and preparing the show. I feel really privileged to be able to do it and have been taking it mega-seriously, so am listening outside my typical interests a lot too which is great and doing a lot for my life. There's a lot of great local music, and lots of it is happening outside of the venues I frequent (when they're open).

If you want me to be more specific though, this week it's basically CB Radio - ‘Time Goes Slow (feat. Kahlia Parker)’, anything by Mystery Guest, and Primo! - ‘Comedy Show’.
Anything happening in the kitchen?
A LOT. Kalindy and I live together and both love cooking anyway, but having a bit of extra time definitely hasn't hurt. We've made dumplings, pizza a few times, bread etc, on top of our normal cooking. Kalindy made some soft pretzels which ruled, plus we made dahl and samosas for a cooking video for 4ZZZ which was so much fun.
What’s keeping you busy?
This week we've had lots of Psychic Hysteria orders on Bandcamp which is great, and has kept me busy with shipping! Lots to post out which is a good problem to have (also, thanks everyone). We've been working on some new Hearts and Rockets songs to release later in the year and will record a couple in a week or so, plus working on some for our third album. Kalindy has been screen-printing t-shirts quite a bit, and we're just finishing off a Hearts and Rockets zine. Psychic Hysteria has also just released the first single by Double Vanity and they have lots more on its way, so planning for those releases - they're so good, seriously.

I just finished doing a remix of a Double Vanity track, and have also been working on a new music project that I'm looking forward to starting soon called Running Writing. It's kind of an indie (?) band that so far has just been me noodling about at home. The legendary Matt Chow has been tracking some live drums for it for me to record bass, guitar and vocals over. It's going to sound sick when it's done. How good is the internet? I'm also lucky in that about half my regular work still exists, so I'm still able to pay rent but also yes, still lots of day to day work, too.
What’s the worst isolation idea you’ve had so far?
Thinking that because I suddenly wanted to go on wayyy longer walks that my 13 year old dog Bonez also would. She's obsessed with walks, it's all she thinks about. She doesn't even care about food, just about when that walk is happening. So I thought quadrupling her daily walk length would be great for her! After a few days in a row, she completely gave up about 100 metres away from home so I've chilled out on that. She's just too old.


What’s something keeping you inspired?
I've been really inspired by our music community, punters and bands alike. Everyone's been really supportive of each other, sharing each other's stuff, buying each other's stuff. It's gross that there's this perceived expectation for people to be productive at the moment - like, it's a crisis, people need to survive first they can be creative later. Seeing people gather around each other without those expectations and celebrating what we have and what we will have again is about as much as you could ever ask for. Like, I consider myself a productive person, but I've really slowed down lately and it's been so good for me, and so good for my mental health. Yes, let's all bake sourdough and make an iso album, but also let's not worry if we don't.


Best ways to support the community at the moment?
Having people buy stuff on Bandcamp is obviously really helpful for us and the artists on the label, but the most valuable thing that people can do is share and comment on stuff online and add bands to playlists and the like. You might love a new song or album (or an old one), and taking that one extra step to let the artist know that they've gotten through to you is often worth a lot more than the money from the sale of that song. Sharing stuff you like just on your personal page to your friends is also a really effective and meaningful way to support local artists and labels. Not only does it help get the word out about local bands, it's just a nice thing to read and can start a conversation around someone's art. I would take the word of a friend recommending a song over any Spotify algorithm, and I don't care if I hate it I'll listen. Please also add us/listen on Spotify though lol.

It's funny, there are always so many online groups and generally people reminiscing about the good old days of Australian music, but there's some seriously exciting stuff happening right now. Places like Trouble Juice provide an invaluable resource for this, so thank you. I'm constantly finding new stuff on your site. 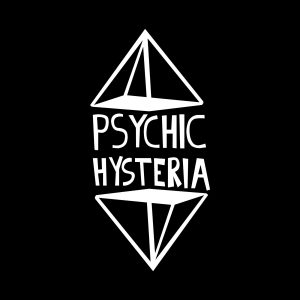 Do yourself a favour and dive into all the great music coming out through Psychic Hysteria at psychichysteria.bandcamp.com, and follow them on Facebook and Instagram to keep up with everything happening in their world.
psychichysteria.com
Photo by Kalindy Williams