Skip to content
Music / Premieres
Read Me Your Work -
A conversation about lyrics with Jarrow
Interview by Elsie Lange
Words by James Lynch
Wednesday 13th March, 2020
In her new podcast series Read Me Your Work, pting bandleader/TJ contributor/general woman about town Elsie Lange chats with artists and writers about what they have written lately.
Elsie started the podcast as a way for people to keep sharing and giving their art to others while entertainment industries have been shattered. In each episode a contributor reads something they have written - lyrics, poetry, short fiction, non-fiction, or a review, it could be anything.

In episode two, Elsie chats with Dan Oke, the mastermind behind Jarrow, about his song ‘Project x Prodigy’, from his forthcoming self-titled record out on May 22nd. Read on to indulge in an excerpt of their conversation, or better yet, dive into the full podcast below.

Elsie: You’re going to be reading us something from your upcoming release, tell us a little bit about what it is and why you wrote it.

Dan: The song I’m going to read today is a song called ‘Product x Prodigy’, it’s on the side B of my new album. It’s a song that covers a lot of themes on the album. It’s also one that I kind of want to break down before people get other ideas.

I guess the style of the song is more upbeat actually, it’s got a sort of funky, electronic beat round the back of it, so it's gonna sound really dark [without it]... this is the first verse of the song.


PROJECT x PRODIGY
Being a product usurps being a prodigy
I wish that someone told me that
Before I got to 23 and the weight was lifted off my back
Is there not even a shred of human decency
Inside that little brain of yours?
Working all the dials
Take your conscious off the beaten track

That almost sounds like a diss track when I read it out like that. The song is kind of anti-industry, I guess? I wrote the song after preparing to take a break from the mainstream side of doing Jarrow on the bigger scale than what I was used to.

The song was written as a reflection of that and about feeling a bit deflated after the process.

You have taken a really different path with your latest release. In the past you’ve gone through labels and you’re still going through a label this time, but it’s pretty close-knit and you’re working with friends - do you think those lyrics were more before you came to the new place you’re in to release this record?

Definitely. That was something I was really conscious of. I was pitching the album around a fair bit before I ended up with Sam and Spoilsport Records. The process of being able to work one-on-one with a label and bring my ideas to life in away that had more creative control over it. Not that I didn’t before, but I now have the final say about what works and what doesn’t work.

This is the best I’ve felt putting out new music and making the videos. It’s been a really smooth process, which has been nice.

Give us your next verse!

So after that first verse, the chorus of the song is:


Let’s take a ride on that lazy Susan
x4

A lazy Susan is just a rotating plate, and I think what I was going for there is ‘you’re just a piece of cheese on a rotating plate for the world’, I guess that’s the metaphor I was trying to go for there. And it probably sounded a lot deeper in my head.

No, but I totally get it - about being vulnerable and just hanging there waiting. I really like that. 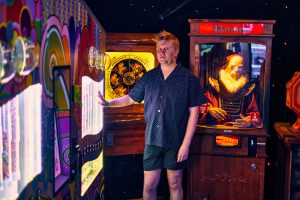