Skip to content
Music / Premieres
Premiere:
The Slingers - Satin Coffin
Words by James Lynch
Monday 29th June, 2020
Today we’ve got the pleasure of premiering the brand new EP from Melbourne rock ’n’ roll group The Slingers - a sudden gear shift, Satin Coffin has the band heading back to their roots with humble instrumentation and folky charm.
The last thing we heard from The Slingers was the anthemic ‘Saddest Man In Melbourne’, a slowburning soft rocker that traded the band’s usual guitar work for bold synths alongside tender vocal croons. While the band share they have more of the same on the horizon, the COVID-19 pandemic gave them a chance to shift their focus momentarily. “We’d been doing a lot of experimenting in the studio in 2019, and have to bigger singles to drop later this year from that batch” they explain. “So we wanted to take a break from the big studio and big synthy sounds.”

Satin Coffin is the result - a collection of rustic and lush folk tracks that divert back to The Slingers origins, without forgoing the magnetism of their newer work. Opening track ‘Little Conversations’ immediately sets this tone, with an enchanting fingerpicked guitar and some humble percussion, while the group's twangy vocals are rich and earnest upfront. It’s more than just a simple folk throwback however - beneath the meandering guitars, soft keys hum and elevate the track to a more expansive place. There’s a similar sense moments later on ‘Heart and Soul’, with its rousing woah’ed refrain, placing the track somewhere between an ambling folk jangler and something a little more grandiose, a mood that’s further enhanced by the emphatic vocal performance.

Next up, ‘Ember in the Snow’ rounds out the EP with its mild guitar that tangles with a fragile vocal melody. Perhaps the EP’s most delicate moment, it’s only challenged in rawness by the EP’s title track. Despite sounding a little rougher around the edges than the other tracks, ‘Satin Coffin’ is just as compelling with its unassuming lilt and warbling instrumentation. The band have mentioned the aim was to make this EP as “stripped back and authentic as possible” and the timing couldn’t have been better - as before the group gear back up to hit us with some more elaborate music, Satin Coffin masterfully captures The Slingers at their charming best. 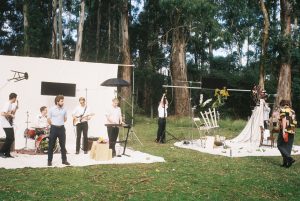 Check out Satin Coffin above, and keep up with the band below to find out where they head next.
theslingers.bandcamp.com
The Slingers on Facebook