Skip to content
Music / Premieres
Video Premiere:
Willie Coyote - Jessie
Words by James Lynch
Tuesday 7th July, 2020
Following the release of his debut album Turning Sky, What Do You See? in May, alt-country songsmith Willie Coyote has offered us one more treat with his brand new clip for album highlight ‘Jessie’.
Originally from New York but now firmly rooted in Melbourne, Willie Coyote has spent the last few years turning heads with his blend of authentic Americana and unassuming folk-rock. His debut album Turning Sky, What Do You See? dropped earlier this year, which had the songwriter revealing his strengths with ease, as the twelve tracks glide between rustic folk and sprawling alt-country with a defiant blues swagger, connected by immersive sound collages and field records that embed the entire record with a natural, spontaneous edge.

A centrepiece of Turning Sky, What Do You See?, ‘Jessie’ is one of the album’s most tender moments - or so it seems. Opening with a delicate fingerpicked guitar alongside Will’s twangy vocals, the track slowly expands with a rollicking snare drum and lilting groove. As the song progresses, the ramshackle acoustic begins to meld with ethereal swirls of lapsteel guitar to create an intoxicatingly lush soundscape, however while the haze develops around him, Will’s voice becomes more robust and vivid. It’s a slow build but the track finally erupts as it heads into one last chorus, powered by exuberant group vocals over the rich instrumentation, as Willie leads the charge with an audible gleam in his eye.

The new clip for ‘Jessie’ manages to recreate the giddy atmosphere that the conclusion of the song is dense with. Cut together from hours of candid footage of Willie’s group of friends, there’s a intimate feel to the whole clip as we momentarily peak into their lives and watch them dance, laugh and enjoy each other’s company. Given Willie describes the song as a “cosmic country portrait of a deep friendship, that celebrates its eccentricities, and longs for togetherness”, it’s a fitting montage, and it’s hard not to watch along without feeling wistful for similarly joyous times. 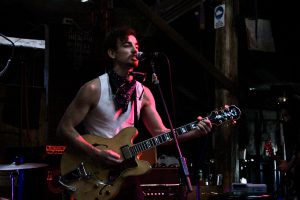 Willie Coyote's debut album Turning Sky, What Do You See? is out now.
williecoyote.bandcamp.com
Willie Coyote on Facebook