Skip to content
Music / Premieres
Premiere:
HAWAII94 - Visualise
Words by James Lynch
Friday 10th July, 2020
Today we’ve got the pleasure of premiering the new album from Melbourne producer HAWAII94 - fluid, disorientating, yet completely immersive, Visualise is a mesmerising journey through lo-fi pop, dreamy psychedelia and otherworldly chillwave, bathed in an enthralling nostalgic sheen.
Between commitments with vaporwave luminaries SURFING, Léroy Honeycomb has spent the better part of the last decade crafting gloriously woozy sonic gems in his bedroom under the name Hawaii94, blurring intricate electronica with hypnotic psychedelia to establish his very own intoxicating universe. Forever testing the boundaries of his sound, his latest album Visualise has the producer pushing out from the insular chillwave bubble that his earlier work placed him in, in favour of lush kaleidoscopic-pop, making this record perhaps his most expansive release yet.

Opening track ‘I’m On Fire’ is quick to set the tone for the rest of the album - emerging with layers of gleaming synth alongside dazzling guitars, while Lee’s vivid vocals float dreamily atop the oscillating beats. Instantly, we’re immersed in the radiant soundscape, one that feels incapable of settling into place as more earworming hooks continually reveal themselves and wash over us. ‘Infinity’ follows suit up next, with a dense groove and beams of soaring guitar leads, while moments later tracks like ‘Alone’ and ‘Fear’ appears like blasts of colour, serving up some of the album’s tightest melodies yet.

The atmosphere is just as absorbing when Léroy changes the pace, like on the enthralling ‘Promise’ with its fluctuating waves of sound, or the cosmic slowjam ‘Eons’. Similarly, early highlight ‘The World Won’t Wait’ is a dose of translucent synth-pop powered by a mid-tempo stomp, but the slower tempo gives the track plenty of breathing space, allowing HAWAII94’s seemingly effortless production to shine as the evolving layers continually mingle and warp.

Often albums as densely crafted as this end up sounding more intellectual than emotional, however Visualise masterfully maintains a distinct visceral edge, flowing with hazy nostalgia that simultaneously feels intangible yet euphoric - making it an album you could listen to every day and find something new to latch onto. Hypnotic from start to finish and bathed in a glorious haze, it’s the kind of album that is as fun to nerd out to with headphones as it is enjoyable to pop on in the background while you spend an afternoon in the sun. 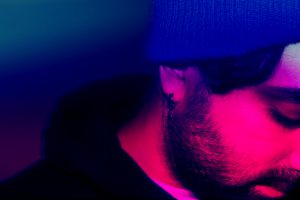 Visualise is out now, via emerging label Subsubmarine - head here to purchase the album on limited vinyl or cassette.
hawaii94.bandcamp.com
HAWAII94 on Facebook