Skip to content
Music / Premieres
Premiere:
Eileen Grace - Rage and Wine
Words by Joshua Hicks
Thursday 16th July, 2020
Today we have the utmost pleasure of premiering the debut single from Melbourne-based group Eileen Grace - ‘Rage and Wine’ is an unrelenting dose of dynamic alt-rock, that lulls us into a false sense of security to bowl us over with its powerful energy and striking emotion.
Led by lead vocalist Chantelle Saunders, Eileen Grace is a collaborative project that begun in Saunders’ hometown of Perth, before she traversed the continent to Melbourne and met multi-instrumentalist Dean Tellefson to establish its current manifestation. Recorded, mixed and mastered by Dean at his own Wrangler Studios, ‘Rage and Wine’ is a striking first taste of the emerging group - powered by Chantelle’s muscular vocals, with both velvety intimacy and a lioness roar, as well as Dean’s immaculate guitar work. Inspired by an introspective conversation with a younger, less confident self, the track’s turbulent atmosphere manages to emulate the feeling of being hurt, alongside the fiery power that comes from taking ownership of your own struggles.

A lone, reverberating guitar introduces us to the track, before the lead vocals lure us deeper into its depths. The initially Americana-folk sounding feel is halted at the pre-chorus, as a tense shift in mood enables the track to expands with the inclusion of an terse backbeat. Although there’s a sense that things are about to kick off when the drums and bass emerge, there’s nothing that can prepare us for the explosion that is the chorus, which erupts open with a wall of distorted guitar and an unexpected classic rock howl from Chantelle. There’s a relentless, almost menacing, feel that anchors the track from this moment forward, the band masterfully revealing the full scope of their dynamic sound piece by piece, a clear tension continuing to bubble beneath the surface as things progress.

Speaking about the track, Chantelle explains “this song was written in an expression of the anger I felt towards my childhood and the vices I used to escape that anger”, but adds “anger is seen as such an ugly emotion - I wanted to try dress it up and see it in a different light and turn those feelings into something beautiful”. Masterfully, ‘Rage and Wine’ plays with this dichotomy - the shifts between a soft touch and unrelenting passion keeping us enthralled for the entire duration of the song - to truly gives meaning to the phrase ‘Rage and Wine’. 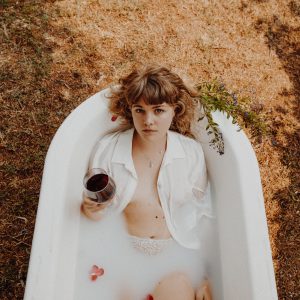 Check out 'Rage and Wine' above before it officially drops tomorrow, and follow Eileen Grace on their socials for future updates.
Eileen Grace on Facebook
Photo by Aidan Bedford