Skip to content
Music / Features
Track by Track:
Mimi Gilbert - Grew Inside the Water
Words by Sofia Jayne
Wednesday 11th November, 2020
Filled with soothing tones of melancholic, self-reflective rumination, Mimi Gilbert’s new album Grew Inside the Water is a stunning expression of emotive vitality. We had the pleasure of hearing from Mimi about the stories behind the songs.
When Mimi Gilbert released her latest single ‘Dark Storm’ earlier this year, Nkechi Anele from Triple J’s Roots & All described her as “one of the best kept secrets in the music industry”, and on Grew Inside the Water, Mimi makes strides in proving this. Opening with ‘Coffs Harbour’ we are transported into a state of tranquillity through earthy tones that reveal the raw and uncharming truths of self. With a progression of heartache, ‘Grew Inside the Water’ delves into the grief of lost and damaged human relationships, through melodies of folk timbre.

This album was composed over years of travelling and begun as quiet recordings in Mimi’s home, before growing into the melodic folio of experience and reflection that it now is; its glorious final form mixed by Cohort Records’ Edvard Hakansson, and complete with backing vocals from Melbourne’s Merpire, Angie McMahon, David Western and Ruby Gill.

Mimi never fails to immerse in personal experience and thoughtful perception of the world around her, as shown with her track ‘Society’s A Mansion.’ On her next song ‘Losing Your Mind’, her unique voice reveals itself in vibrations of emotional understanding, bringing to light the kind nature of her character. With ‘Statistically Speaking’ she welcomes us deeper into her mind and shares with us a pain that all can find resonance with.

The track that has brought eminence to her name, ‘Dark Storm’ is a whirlwind of calm and surge. A transportation of memory to thrashing waters of emotive unrest in the mind. ‘Taught to Build Walls’ tells of the confusion of being lost from a person’s life, again unravelling the complex coil of relationships, before ‘Ireland Song’ paints vivid imagery of a natural setting, embellished by considered layers of instruments and voice, transporting us into the story.

Mimi was born in California and began playing music on the streets of Santa Barbara at just 15. Through this, she learnt how to use music as her outlet and voice as her instrument for conveying a life of stories to tell. ‘Dancing in the Sun’ does just this, again stretching the scene over the canvas in our minds. Finally, to finish off an album of great sorrowful depth, Mimi gifts us with a taste of hope in her track ‘When You Rise.’

To dig in a little deeper in the album, we invited Mimi to share the stories that inspired each moment on Grew Inside the Water.
Coffs Harbour

I originally wrote this tune as an instrumental when I was in Coffs Harbour, the little coastal Australian town. It sat collecting dust for about a year. It wasn’t until my Coffs Harbour friend asked me to send the voice memo to her that I decided to try and put lyrics to what I was feeling that day and that year. It ended up being one of my favourites of the album.

Grew Inside the Water

I wrote the lyrics in an airplane and on the train from the Melbourne airport after getting back from an extended trip in the USA. I could never quite put into words why it always felt so hard to leave my home. I remember writing the lyrics out and missing my stop by a long shot. It ended up taking my three hours to get home that day. The song was a painful one for me to write. It’s about abandonment and trying to accept change, simply.

I made my living from street performing for over seven years. It is really how I was able to travel around so much. It shaped who I am. This song reflects on my favourite memories of playing on the street and travelling with my brother.

It is also about viewing success differently than what the mainstream world tells us it is. The success I see is in remaining curious like a child, seeing beauty in things untamed and wishing not to tame them.
Losing Your Mind

This song was never intended to be on the album. I wrote it while sad and lying in on the floor of my bedroom the night before going into start recording the album in Ventura, California. At the time, it felt (and was) impulsive to add it so last minute. But once I tried playing it on piano, it felt like the right thing to do.

It is ultimately about or for those us who struggle with our mental health, and the process of finding stillness in the moment. It was inspired after talking to a friend about punching holes in walls. We were laughing about it on the phone because I have punched a number of holes in my parents wall growing up. I don’t do that anymore thank goodness. I took up running.

I recorded this song in Ventura, CA with my dear bandmates in the room, who you can hear laughing at the start. This song was always meant to be sad, but when I got together with my band to arrange it, they said “Mimi, whether you like or not, it has a groove.”

I wrote it when the USA leadership rhetoric of building a wall between us and Mexico, among other things, had many people excited like children hungry for candy. It made me so sad to see such thirst for walls, in general.

This was one of those lucky songs that felt like a gift to me more than anyone else. It’s exactly what I needed to hear in that moment of my life when writing it. We were playing a house show tour in Europe and Ireland then. When I finally, after a few months of travelling, had a private day to sit and write, this song just came out. I very thankful for it, it’s one of my favourites.

Dancing in the Sun

This is oldest song on the album. I wrote this song six years ago, dedicating it to the fellow weirdos, the strange, fringe, beautiful, queer, travelling, homeless people I met everyday while busking in Wellington, New Zealand. This song is an anthem to say to myself and anyone who has ever been deemed as shameful or not good enough, that indeed they/we are the children of the earth and we are the ones dancing in the sun.

I wrote this for a friend while I was far away from them. I just had a feeling they weren’t doing okay. It was my way of trying to send some light. This one is hopefully encouragement for people to hold onto life in their darkest hours. You are loved and needed here. 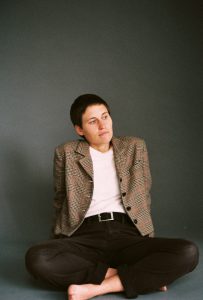 Grew Inside The Water is out now through Cohort Records - head here to listen to the album in full, and go to mimigilbert.bandcamp.com to purchase the album on vinyl or CD.
mimigilbert.com
Mimi Gilbert on Facebook
@mimigilbert_
Photos by Edvard Hakansson