Skip to content
Music / Features
Track by Track:
Dr Sure's Unusual Practice - While Aus Burns
Words by James Lynch
Friday 13th November, 2020
Following the release of While Aus Burns last month, the latest collection of erratic and charged post-punk from Dr Sure’s Unusual Practice that serves as a companion piece to last year’s Scomo Goes To Hawaii, we caught up with the Doc to have him unravel the scathing critiques that underpin each track on the EP.
In contrast to their phenomenal work-rate of the past few years, 2020 has been an especially quiet year for future-punk weirdos Dr Sure’s Unusual Practice. That said, it seems that even when they’re on pause, the cogs are still turning in the background, and last month, seemingly out of nowhere, the group's enigmatic leader Dougal Shaw reappeared with a new release in tow.

While this collection of songs were written at the beginning this year in the wake of Australia’s horrifying bushfire season, the release of While Aus Burns feels equally fitting now, spurred by Scott Morrison’s recent announcement of a “gas-led recovery out of COVID”. It’s also fitting that last week the EP debuted at number five on the AIR charts, one spot ahead of Brisbane act Sheppard, who are simultaneously in the news due to the revelation that the group’s father/chief financier is the head of security at Manus Island. The optimists might read into this as a small step in the right direction, a triumph for a socially conscious band over their polar opposite. Conversely, the cynical might believe that nothing much has change.

On While Aus Burns, Dr Sure fits into neither category. Instead, he’s contempt and agitated, restless for a fix but stifled by ineptitude - a sense that’s perfectly captured in each pulsating and nervy track. EP opener ‘Blood Munny’ is urgent and ominous, driven by an anxious beat that tangles with sharp guitar leads and a sinister, snaking synth line. ‘Twenny Twenny Vision’ and ‘Murray-Darling’ are similarly disconcerting, both built around an angular groove that feels crafted to buck us off the pulse, while Dougal’s usually dynamic sneer edges into something more robotic - sounding forceful yet restrained at once.

The EP’s closing track ’10 Million Acres’ reveals a new side of the project though. Where in the past Dr Sure’s distress was often wrapped up in fury or satire, for the first time he sounds exhausted. Over an almost clinical backbeat, synths whir aimlessly and uncanny noises bleep, and Dougal’s voice lulls wearily. However, as the song unravels and the power amounts, with layers of frantic guitar and a refreshed groove, Dougal audibly gains strength, the fury that sits at the heart of the project returning to burn fervently.

When the track does subside again at its conclusion, things are slightly different - not exactly hopeful, but definitely not resigned either. It’s a startling way to conclude the EP, but perhaps the most suitable expression of these uneven emotions, and a striking reminder that in the face of crisis, Dr Sure’s might just be Melbourne’s best.

To help us dig deeper into While Aus Burns, Dougal was kind enough to share the motivations behind each track.
Blood Munny

This is a love song about fossils. It’s about the continued investment into outdated industries that are making the planet literally uninhabitable. Big fuck-off corporations who try to pass the buck onto the individual. It’s about pollies taking donations from their buddies in those industries. Then things like this ‘gas-led recovery’ are announced and we have to pretend like it’s not cos they owe their buddies favours for buying the election for them. It’s about the suppression of science and alternative, renewable energy sources so that these fossil fools can flog their dead horses, like mozzies trying to suck the last blood out of a dried out corpse.

This is a love song about water theft and corruption on the Murray-Darling. It’s about the mismanagement of the river system. It’s about the displacement of indigenous communities who managed the rivers and land for 10’s of thousands of years, then the white man comes along and destroys it in a couple hundred with our "superior" "civilisation". It’s about ya boi Barnaby, the barnacle in Australia’s collective toe (& the lib/nationals), misplacing millions of dollars aimed at implementing the Murray-Darling Basin Plan and misdirecting millions of litres of water toward big irrigators and new mining projects at the expense of Aboriginal people, small farmers, and obviously all the fish and wildlife that died as a result. And of course subsequently fanning the flames of the bushfires.

This is a love song for everyone and everything that was affected by the fires. Like the rest of these songs it’s also a bit of documentation of the governments mishandling of the crisis. This one was specifically inspired by my 3500km drive through the country in late December/early Jan and the rolling updates I was getting on the radio about the extent of the damage. It’s sad for me to revisit but there's also an air of hope about it. There was a feeling that we were gonna come out stronger - that the government were gonna be held accountable for the decisions they make that exacerbate these crises and keep leading us into a more and more kinda’ volatile world. It was a feeling that we would start to have these hard conversations cos it was a collective trauma that we were all experiencing, a bit of an equaliser. Hasn’t quite panned out that way. Libs are back on their bullshit, Murdoch racket loves it. We out here!

Thanks TJ for letting me ramble on. Also for supporting the independent music world through this fucked year, you guys keep charging on, bringin us the goods and givin us a platform to air our discontent. Well in. 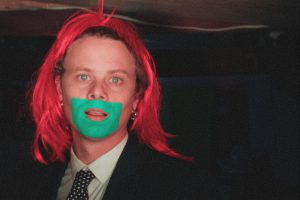