Skip to content
Music / Features
No Sovietski -
inside the new wave of Russian and Ukrainian underground music
Words and interview by Veeka Nazarova
Tuesday 17th November, 2020
Over the past five weeks, Melbourne-based musician and artist Veeka Nazarova has invited Trouble Juice readers into the mysterious world of the Motherland, as she introduces us to five acts from across Russia and Ukraine. To finish the series, we get acquainted with the adventurous and experimental Moscow group Glintshake (ГШ).
Veeka Nazarova: What do we know about Post-Soviet music? Not much, only a handful of musicians from Russia/Ukraine/Belarus that we accidentally stumble upon on Spotify or YouTube, that’s probably it. I tried looking up ‘best Russian bands’ or ‘best Ukrainian bands’ on Google, and it’s just not coming up with anything interesting. I felt like the only way to find out was to switch to my Russian Fb (called VK-Vkontakte) and try finding something on there. 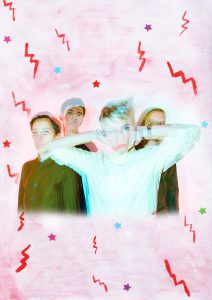 Glintshake are a Moscow based band who have a lot of energy to give to their audience. The band’s sound mixes elements of avant-garde jazz, classical music and Soviet new wave, however Glintshake don’t want to be stuck to a certain genre or imitate a style - they just get inspired by the ordinary things in their everyday life and fully embrace it. Sometimes they are making fun of it, sometimes being critical. Glintshake are a band that never stops - they are constantly moving towards bigger things and always reaching new horizons. Trouble Juice spoke to guitarist Jenya Gorbunov (also of Moscow band Inturist) and vocalist/guitarist Katya Shilonosova (who also makes music as Kate NV) to find out about the life of the busiest Russian band today, as well as their creative vision.
VN: Could you tell us please when Glintshake (ГШ) started and what ideas you had in your head before you put together a band and started practising together? Also, what influenced the name of the band and who are the members of Glintshake? Sorry I literally just attacked you with all the questions.

ГШ: Our band started back in 2012. At first it was only me and Katya (Kate NV). We started recording our material together and used drum samples to replace the real drums on recordings. After a while we introduced other members into the band - Vasya Nikitin and Dima Midborn, who were later replaced by Lesha Evlanov and Egor Cargasyan. To be honest, I don’t think I should talk about the early period of the band, as nothing interesting happened then. We did record and play gigs and festivals, but nothing was out of the ordinary and we didn’t really think we were successful at the time.

The name of the band, ‘Glintshake’ is something very abstract, as we didn’t want to picture any specific ideas. At the time, we really thought our music was very similar to the noise-rock of the 90s. I discovered that all the noise rockers at the time had very cheap instruments and it looked pretty lame  - some old shabby instruments with heaps of glitter on top which was very contrasting to our music. I think our name somehow translates this contrast - of this really shiny, tacky music gear and our rough noisy music. After we made a change in the band in 2015 and started singing in Russian again, we came up with a Russian version of the band name which is ГШ -an abbreviation of ‘Glintshake’. ГШ = GS.

To me, it seems like some of your music influences come from new wave/post-punk from the 80’s or even the 80’s Soviet punk. Is it true, or am I wrong here? Where do you find inspiration for writing music these days?

When we start working on new material, we get inspired by the absurdity of our life, as opposed to a specific genre. We just try to use very expressive ways to convey it in our music. It just happened to be that our music falls into the category of new wave and post-punk, but it doesn’t mean that tomorrow we won’t decide to suddenly change it. We are actually advocating for erasing all genres completely and try not to label music this way. What genre are Glintshake? You can write anything you want…

Recently, you released an amazing record Гибкий график (‘Flexible Schedule’) which appears to be super different from all other albums you’ve done in the past. It’s very experimental and avant-garde with some jazz notes present in it! I really loved it, it sounds great. Tell us the story of how this album came together.

Гибкий график (‘Flexible Schedule’) fully consists of improvisations, recorded in our Moscow studio. Half of the tracks we completed with vocals and percussions and the other half remained untouched. In the first track we added the vocal and flute parts to make sense of this very long jam and give it a bit of a structure. As this whole music was improvised on the spot, we had to come with some ideas for it later. I think this is the most abstract and experimental album we have ever done and therefore it’s our favourite. There wasn’t too much thought put into it, that's why I like it so much, it’s so effortless and flows really nicely. Гибкий график doesn't have any contemplations about life or everyday life stuff that we encounter all the time. I’m sure any music can be made just for the sake of it without any deep meanings and social commentary.

Your live videos really take my breath away, you’ve got so much contagious energy! I even noticed you made it to KEXP! Did you like playing there and what do you think about playing live in general? Do you often play in Moscow or other Russian cities and how often do you tour overseas?

We play a lot and tour Russia and Europe heaps. We love touring so much! What can you say, first of all we are a live band, hence all the albums been recorded mainly live, in one room. I think we just really want our recorded music to sound the same as it does when we play it live.

Tell us about your favourite music artists from Russia and other Post-Soviet countries! What contemporary bands are you inspired by? We really want to know 🙂

In Russia we are currently experiencing an absolute boom in music. There are always so many new bands popping up and they all sound very good and confident even if they are young. I think in the past we had a lot of troubles finding decent gear and recording ourselves well. Nowadays it has all become very affordable and easily accessible, and anyone can record an album in their bedroom and make it sound professional for very cheap. I wouldn’t say I love all the new bands that are coming out now, I think most of them are targeting their age group, but I really love bands like Поехали, Дима Мидборн, Директор Всего, Мария Теряева, Omma, Всадники ЖКХ, USSSY and other unusual artists.

So I have this question for you… how do you go about discovering new tunes? Which platform do you usually use?

Most of the time we discover new music through friends or buying vinyl, or sometimes we learn about new artists via Soulseek. But I really like when music finds us, I think it’s really cool when it happens. Like when you accidentally find a song on YouTube or someone shares a favourite record with you.

Tell us how much your plans have changed since facing the pandemic this year.

Our plans didn’t really get cancelled this year, because initially we had none! We are a very passionate band and take things as they come, we really live in the moment. We just usually go with the flow, try to always focus on recording and while recording always playing heaps of gigs. We try to play and release regularly. We have actually managed to play a lot of shows this summer (June, July and August) and in September, so 2020 has actually been a very big year of shows for us. Glintshake managed to play a couple of big festivals and play a solo show as well.

What do you expect in the nearest future for Glintshake?

What do I expect in the nearest future… I don’t really know. Looks like we are not going to tour for a while with this second wave of pandemic. I think we are just going to be stuck in Moscow, working on new material, so yeah, nothing interesting at all. 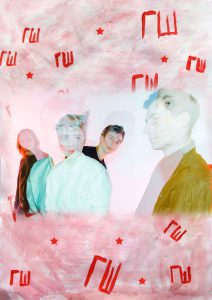 Гибкий график ('Flexible Schedule') is out now through Incompetence Records - listen to the album here and follow Glintshake below.
Glintshake on Facebook
@glintshake
Photos by Jenia Filatova
Band collages by Veeka Nazarova