Skip to content
Music / Features
Track by Track:
Lyndon Blue - Wet Paint
Words by James Lynch
Thursday 19th November, 2020
Off the back of the release of Wet Paint, their latest collection of uneasy art-pop mixed with heady post-punk, we caught up with DIY oddball Lyndon Blue to dig into each track on the eclectic new EP.
As one of Australia’s busiest and most erratic underground artists, Lyndon Blue has spent the last ten years amassing a pretty impressive track record - they've performed with Methyl Ethyl, Peter Bibby and Darron Hanlon, and released their own music from a number of projects, crafting everything from grandiose folk through to ambient electronica. Under their own name however, Lyndon creates fluid and surreal pop music, and the latest EP Wet Paint may be their most unpredictable offering yet.

Where the previous EP Warm Corona was perhaps a more focused effort, Lyndon’s aim with Wet Paint was to create a collection of songs that weren’t to be overthought - maybe as a response against the constant apprehension we’ve felt in the face of this year. As a result, Wet Paint sprawls and unravels thrillingly from beginning to end, unrestrained by genre and mood to instead paint a technicolour picture of Lyndon’s delightfully warped world.

Opening with the uncanny ‘Wet Paint Pt. 1’, perhaps the album’s most subversive moment with its nervy programmed synths and squiggles of abstract saxophone, we’re introduced to Lyndon’s ability to blend eccentric with ominous in a completely playful way, a common theme across the entire EP. As ‘Wet Paint Pt. 2’ emerges with its grimy chug and menacing vocals, this idea is forced home - it’s sinister sounding, but with enough off-kilter charisma about it that the track ends up feeling far more colourful than dark and brooding.

From the propulsive ‘Hold Music’ with its tangle of buoyant guitars and wide-eyed melody over a post-punk groove, through to the freaky grooves of ‘Weird Horizon’ and onto the immersive yet restless electronica of ‘Little Scroll’, Wet Paint continues to throw curve balls at us, yet remains anchored by Lyndon’s undeniable songwriting smarts and acute perspective, even with every zany vocal hook and irreverent left-turn.

To help us journey even deeper into the EP, Lyndon has walked us through each moment on Wet Paint.
Wet Paint Pt. 1

I wanted to call this record Wet Paint because in the past I’d spent too long fine-tuning records, tinkering with details forever with diminishing returns, and this time I wanted to just fling it into the world while the ideas and the recordings still felt new. This track was the most spontaneous of all: improvised synth arpeggios, noises made with whatever was on my desk, and then Snowy came round and improvised the saxophone lines. So this is the Wettest Paint of all.

This one shares the ‘Wet Paint’ title because the approach was similar, although it’s quite a different thing musically. The melody, which is just a short phrase repeating, came from a sly voice memo while I was at work and the lyrics were written very quickly, almost stream-of-consciousness. The whole ‘first thought best thought’ thing can be too romantic and/or an excuse for putting out total junk, but it does help to come in from a different angle. It was nice to figure out what the song was about after I’d already written it.

So, this one already existed as a demo before the pandemic really got underway, but as soon as we were in lockdown in Melbourne it suddenly felt hyper-relevant, and I had to put it on the record. It’s really just a song about friendship, and how when things aren’t good there might not be much you can really do for each other, especially when everyone’s struggling in their own separate way. And yeah, especially when you’re not allowed to see each other because of a deadly virus. But just knowing those friends are out there and they give a shit, that can be the difference. With all our conversations suddenly over the phone, the main metaphor became less of a metaphor and more a daily event. I actually hate having conversations on the phone, but I did once secure an interview to work as a hold music writer, and I wish I got that job.

There’s a theory that’s done the rounds on the internet, that at the end of Titanic (1997), Jack would have fit on the door that Rose uses as a life-saving raft. Mythbusters even did a thing on it, but I haven’t watched it, I just think it’s funny that the theory exists and people feel so strongly. More recently I was watching Gary Ablett Sr. rant about the end-times, the Illuminati and DNA-altering COVID vaccines on YouTube from the driver’s seat of his car, and it felt like a great summary of 2020’s unhinged mood. These things make me think about a whole breed of internet conspiracy theories where the “truth” is kinda beside the point, they’re more like their own paranoid art form. Because whether the theories are true or not: what are we actually gonna do about it?

‘Weird Horizon’ started as a bass line which I made up during a soundcheck at the Melbourne Zoo last year (which was easily my favourite soundcheck ever), and then more recently it grew into a fully certified Song. I’m pretty obsessed with concepts of incantation and manifestation, hence “speak of the devil and the devil appears.” This song is sort of about rising sea levels and the end of the world, which is why the music video takes place at the “Doomsday Vault” in Svalbard, Norway, where they’re storing all the world’s seeds for future generations to revegetate the earth. But it’s also about prophecy, the eerie thought that maybe all of this is only happening because we started talking about it, we made it possible by imagining it, when we first spoke about it. Snowy is back on the sax for this one, and his lead break in the middle is really <
I Need A Window

I’m not sure I have much to say about this one, but I think it might be my favourite song I’ve written and recorded so far, and it features slap bass and a fake (sung) guitar solo so make of that what you will.

The title here comes from the Biblical apocalypse - about halfway through the book of Revelation, a “strong angel” comes down clothed in clouds, with a face like the sun and feet like fire, and he’s holding this little scroll, an ancient text in his outstretched palm. And he tells John (who’s writing Revelation) to take it and eat it, and that it will be sweet as honey in his mouth but bitter in his belly. And John eats it and it’s just like the angel said.

It’s a weird, ambiguous, psychedelic scene that no-one seems to be able to explain properly, which is part of why I like it. It’s also funny to me that an angel would make you eat something that tastes good but gives you a stomach ache. I got to thinking about our own Little Scrolls, if Gary Ablett (and science) is right and we’re living in the End Times. These things that feel good and sensuous for now, but maybe won’t sit so well down the track. Or on the flipside, maybe pleasures-for-right-now are a good antidote to the apocalypse… and maybe they could prepare us with some nourishment we don’t quite understand yet. 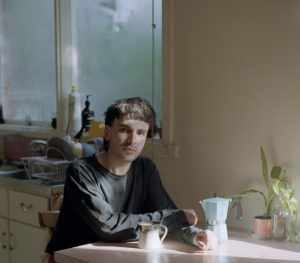 Wet Paint is out now through Cudighi Records - head to cudighirecords.bandcamp.com/album/wet-paint to purchase the EP on limited cassette.
lyndonblue.bandcamp.com
Lyndon Blue on Facebook
@lyndonxblue
Photo by Karl Halliday