Skip to content
Music / Features
They Made Me Do It -
Talking Influences with Mr. Teenage
Words by Francis Tait
Friday 27th November, 2020
Following the release of Automatic Love last month, we caught up with emerging rock ’n’ roll powerhouse Mr. Teenage to dive into the influences that inspired their debut collection of thrilling garage-rock mayhem.
Rising out of the ashes of a number of much loved Melbourne acts, Mr. Teenage’s debut EP Automatic Love picks up right where we had hoped they would. The new release is a concise and earnest serving of manic garage rock ’n’ roll, that is glued together by its irresistible charm and bucketloads of heart.

From the first frantic seconds of the lead single and title track, through to the whistleable pop melodies and mouth-watering hint of guitarmonies (as if I wasn’t already hooked) of EP closer ‘Kids’, Automatic Love is a extremely repeatable collection of timeless rock songwriting that I can see myself coming back to plenty of times over the summer.

Now that Mr. Teenage’s debut EP has just ticked over one month old, we had Nic Imfeld run us through the key ingredients that went into defining his band's raucous sound.


The Stevens - The Stevens
The Stevens have been pretty much my favourite Melbourne band since they began performing in 2011/2012.

The original line-up consisted of Alex Macfarlane, Callum Foley, Tam Matlakowski and Travis MacDonald. Travis and I grew up in the same town and his songwriting and general creative ability has always been a big inspiration and motivation for me and my writing.

I was living with Alex when the band self-released this excellent EP. I think it was initially only available on CD and cassette. I was really impressed that they put this out themselves at a time when a lot of my friends' bands were trying to get something released on a label, especially when The Stevens were probably the most likely candidate in our group of friends to get label attention. In the months following the release they received that attention when several labels offered to repress it and Chapter Music ended up rereleasing it as a 7".

Witnessing that process was the basis for me wanting to release this EP ourselves and it's been a really cool experience.

I like everything about The Stevens - songs, lyrics, stage moves and of course the playing! The guitar playing is so good in this band. I wrote the song 'Automatic Love' in 2013 and the little riff after the guitar solo is my attempt at a Travis MacDonald style riff. It's intended as a nod if anything - I fall short, obviously.


Lewis Hodgson (Civic, The Snakes, Whipper)
Lewis is one of my oldest friends. We met in 2000 when we both started at a new primary school. We became friends and soon realised our mutual interest in music. Over the years we would share bands we found or had been shown and both eventually started high school bands. His one was actually pretty good, mine was pretty shit.

When we were teenagers I saw his band (which also included Tristan Davies & Chris Gray) play a show in our hometown. It was amazing. They opened with a cover of 'Search and Destroy'. The whole thing blew my mind, they were about 14 years old and they had everything you would expect in an established touring band. It was an incredible show and as I write about it now I'm reminded just how much of an impact it had on me. After that I desperately wanted to make music with Lewis. That band ended not long after and we soon started a band of our own, which we continued for around seven years.

We don't play together any more but we're still close mates and I love seeing his bands and hearing his new music. Having spent our formative years together a lot of our musical influences are identical and it's always been cool to see how our interpretations of those influences differ. We can still talk about music and our respective writing 'processes' together and his opinion is still one of the only opinions that matters to me.


Memphis, TN.
Memphis is my favourite music city in the world. Memphis music has been my main musical influence long before I knew it was Memphis music. The first thing I ever saw on the internet was a still photo of Elvis with Heartbreak Hotel playing on top.

Growing up I heard music by Booker T. & The M.G.'s and Roy Orbison. Later, I'd hear Big Star, then Chilton's other bands and Chris Bell's solo music. But the real clencher for me was Jay Reatard. Blood Visions changed music in my opinion. One of those rare albums that makes you reconsider everything you're doing. At the time I was stuck in a David Yow rut, listening to Scratch Acid and Jesus Lizard almost exclusively for two years.

Blood Visions came out and after one listen it was all I wanted to listen to. Soon after that I had annoyed everyone around me by talking about Jay too much, so Cal Walker showed me Reigning Sound. And that was that. They are still my favourite band and Greg Cartwright is my favourite songwriter hands down.

In 2013 I travelled to America, a goal was to meet Greg. I did meet Greg and he was a lovely dude. Three years later while touring Australia with the Oblivians, he performed a set of Reigning Sound songs with a band and I was fortunate enough to be included on bass guitar - that's my personal musical highlight. Jeremy Scott, the RS bassist, is an incredible player and I hope I did him justice. If you haven't heard Jay Reatard or Reigning Sound I suggest you do so immediately. A lesser-known Memphis musician who needs to be mentioned here is Jim Johnston (actually from Arkansas but I believe Memphis claim him). He is the person responsible for most of the music in WWE and has been for the better part of thirty years which leads me to my next influence...


Professional Wrestling
I love wrestling. I knew I would when I first saw WWF backpacks as a kid. Stone Cold Steve Austin, The Rock, Mankind, Undertaker, Kane... These days, the late 90's early 2000's is considered Pro Wrestling's hay day, affectionately known as the Attitude Era. Not that I knew it then - discovering wrestling was a happy accident - I just happened to be a kid in a small town with very little to do. I am so glad I was paying attention but if I hadn't of been, I would lie now and say I was.

I would ask my dad to stay up to record Monday Night Nitro at midnight each week and would wake up every Tuesday morning brimming with anticipation as I checked to see whether he managed to hit record before falling asleep. The disappointment was crushing but when it worked the rewards were huge.

Wrestling taught me a lot about storytelling, themes, drama, persona, character and how to reflect the real world in the exaggerated world you create.

A lot of my writing in Mr. Teenage draws on my own experiences as a kid/teenager retrospectively, trying to channel how certain things made me feel at the time. I often watch wrestling from that time to get into that headspace again.

Wrestling is fun dressed up as violence (kinda like punk). It creates small silly drama and pretends it's the most important thing in the world (kinda like "punk"). Like all good songs, wrestling is written, but that doesn't mean it's fake. The commitment of the wrestlers is real. The effort is real. The injuries are real. The passion is real. The love I have for wrestling is very real. Wrestling IS real, people are fake. 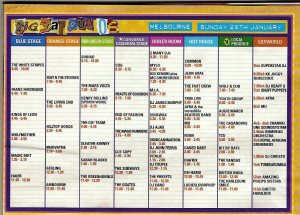 This day was pivotal for myself and a lot of people who I didn't know at the time but would meet at moments in the years to come. The Stooges played this Big Day Out and that is why it's important. Other not so important acts included Mudvayne, Franz Ferdinand, Wolfmother and The White Stripes. I waited at The Stooges stage with some friends for most of the day. I was a devout fan by this point, as was my brother Joe and Lewis, who I had attended with.It was all living original members: both Asheton Brothers and Iggy with Mike Watt (Minutemen, fIREHOSE) on bass.

I've met so many people over the years that were somewhere in the first five rows of that show. I like to think of it as our version of The Sex Pistols at The Lesser Free Trade Hall in the sense that kids who saw that show all started bands. We all had the same experience and it changed all of us. It was the best show I had ever seen and it still is, I doubt I will see a better show and if I do I doubt I would admit it. Joe and I left straight after, completely content missing the other bands.

The very next day I got the train from Castlemaine to Bendigo, exhausted, sunburnt, my mind still blown from the night before. I started a music course at TAFE that day. I knew no one and was the youngest in my class (Steve O'Neil from The Cannanes was the oldest, he is so cool. Hi mate.) During the lunch break, I sat nervously in a foyer waiting for class to go back and a young chick walked in wearing Chuck Taylors, an actual leather jacket and the best DeeDee Ramone hairdo I had ever seen. She said her name was Nads which is short for Nadine.
Automatic Love is out everywhere now - head to mrteenage.bandcamp.com to enjoy and/or purchase the EP on limited vinyl.
@mr_teenage
Photo by Jamie Wdziekonski