Skip to content
Music / Premieres
Premiere:
Hideous Sun Demon - Live in Leeds
Words by James Lynch
Friday 11th December, 2020
To put the lid on perhaps the quietest year in their near-decade long career, today Hideous Sun Demon have shared Live in Leeds, an unearthed live album from 2019 that captures the band at their haphazard and frenzied best, now immortalised in tape by the good people at Marthouse Records.
As one of Melbourne’s most chaotically restless bands, a year stuck at home wouldn’t have boded well on paper for garage punks Hideous Sun Demon. However, the trio have managed to make some good of a tough situation with the release of two agitated singles throughout the past months, as well as frontman Vincent Buchanan-Simpson managing to christen a brand new project EUGH and share his second solo album as Terrible Signal. But today, as a fitting way to round out a gig-less year, Hideous Sun Demon have dropped Live in Leeds, a feverish reminder of the band’s inimitable live power that does its bit to make up for all the onstage time lost to 2020.

With tracks pulled from their three albums and most recent Good Time EP, Live in Leeds is HSD at their most affronting, nervy and gloriously unhinged. Where Vin’s vocals are manic at the best of time, across these eight (technically ten) tracks, his yelps sprawl and buckle gruesomely as they tangle against his sinewy guitar work. And underneath, the Jake Suriano/Andy Blackman rhythm powerhouse is lean and relentless, propelling every track with a heaving and raw energy that feels unstoppable as the track’s blur together. From opening track ’24HR DINGA BANGA MIX’, with its rapid-fire lyrics and hazardous blitzes of noise, through to the explosive ‘Can’t Live Like That’, this is HSD at the top of their game that has us just about salivating for the return of their live show next year. 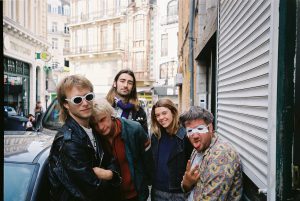 Live in Leeds is out today through Marthouse Records - head to hideous-sun-demon.bandcamp.com to grab the album on limited cassette.
Hideous Sun Demon on Facebook
@hideoussundemon