Skip to content
Music / Features
They Made Me Do It -
Talking Influences with Flyying Colours
Words by Matthew Thorley
Wednesday 3rd March, 2021
Five years on from their gorgeous, ethereal debut Mindfullness, Melbourne shoegazers Flyying Colours have returned with their sophomore record Fantasy Country. We caught up with the group to investigate some of the influences on their explosively colourful new record.
Five years is a long time in the music industry. Actually, five years is a long time in any case, especially in a world where our previous year felt like ten. But there’s little in life better than something truly worth the wait.

The road to Fantasy Country began with ‘Goodtimes’, released back in November 2019. The noisy, aeriform track opens with gorgeous synths that sound like morning light creeping through cracks in the curtains, with energy reminiscent of the Slowdive classic ‘When the Sun Hits’. The track then falls into an intoxicating jangly groove, indicating the band has not missed a beat; in fact they’re building on the beat, growing and expanding their sound.

The delivery of the hook on ‘Goodtimes’ is less subdued than the typically washed-out vocals of the shoegaze genre, or even those on Flyying Colour's fuzzy debut. This unique aspect highlights the increased focus on lyricism throughout Fantasy Country, which is consistently poignant and heartfelt; a tone reinforced on the song ‘OK’, as the band ruminate on mental health and escapism through prescription medication and drug use.

On tracks ‘This One’, ‘White Knuckles’ and ‘Boarding Pass’, the atmospheres are allowed to breathe and grow, embracing a Brian Eno inspired ambience and Explosions in the Sky styled post-rock. The epic swelling of these tracks to new dreamy heights are sure to form trancelike dance floors across the country.

It is for this reason the album is dropping now. Though ready for release in the midst of 2020, Flyying Colours have such a strong focus on live shows and interaction with their audience that they were willing to wait just a little longer. Now finally, we’re lucky enough to be in a position to experience it all as it was always planned.

To get a better understanding of how this beautiful record came to be, we got in touch with the band to see what it is that inspires and influences their creative output.


Brian Eno
Eno has been my biggest inspiration over the last ten years. From production, to composition to general life lessons. Eno’s ambient work is constantly playing in my headphones reminding me to slow down, take time, and enjoy what I’m doing. To prioritise the good parts of the day. I have made my own little oblique strategies cards that I use in the studio often and they really do work. He is 100% the reason I started playing around with synthesizers which were used quite a lot for the first time on this record.

We have a band game - the hat game. Essentially we stand in a circle and toss a hat between us with the aim of landing it on another’s head. There is an informal minimum distance between players and a player may not use their hands other than to toss the hat. The game is only finished once any player has successfully caught the hat on their head. Players may not leave the field of play (wherever that may be) until the game is finished. While it may sound simple, this game has defined us. Some days life is really easy and everything works out just as it should, but other days for no reason at all things can be really difficult and it all takes way longer than it should - just like the hat game. It represents our commitment to one another, our pledge of perseverance.

I have always had a fascination with flying. I hadn’t really flown anywhere before starting the band so I think by association I will always be excited by it. So many ideas, melodies, lyrics etc. have come from sitting on a plane staring out the window. Between being obnoxious with the band I always take a moment to go over the demos kicking around on my phone while in the airport or on the plane. The whole experience for me defines what inspiration is. I feel a unique disassociation with the world when I’m up in the air, the calm of having no phone and nowhere to go. It’s all very clear. Some music is great driving music; I would like to think we make great flying music. 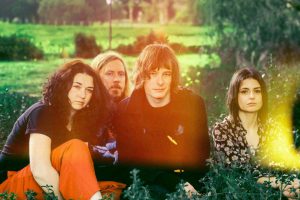 We have a ridiculous bond in this band. We laugh, cry, yell, argue and everything in-between. Much like most tight friendship groups, we have developed our own language that can frustrate the hell out of those around us. We are always brutally honest with one another and through that get the best out of one another. Being in a band is always supposed to be enjoyed and even through the most difficult moments we are always able to remember that. I could list all the music we listen to, our favourite artists, poets etc, but I honestly feel being in this thing together and standing by one another is the biggest inspiration we have. It’s all very mushy, but we haven’t seen one another very much over the last 12 months so it feels very good to be back.
Fantasy Country is out now through Poison City Records - head to flyyingcolours.bandcamp.com to grab the album on limited 12" vinyl.
Flyying Colours on Facebook
@flyyingcolours
Photos by Ian Laidlaw