Conceived by comedian and 2020 Moosehead Award recipient Kit Richards, Scandal! is an unapologetically biased musical representation of the events that transpired at Windy Hill from November 1st, 2011 onwards, following on from Kit's 2019 Triumph Wool! The Musical - a musical history of Australia’s wool industry.

On top of a burning passion for the Essendon Bombers and a musical comedy prowess that had her nominated for a Greenroom Award for Outstanding Cabaret Writing in 2019, Richards has enlisted local legend Scott Edgar of Tripod as script editor and dramaturg, plus brought the whole thing to life with a three piece band made up of Trouble Juice regulars Kelly Dingeldei (Laura Imbruglia/Zig Zag), Elly Hewitt (Porpoise Spit) and Dom Buckham (Porpoise Spit/Rat!Hammock).

Ahead of opening night this Thursday night, we gave Kit a call to talk about the new show, its link with the local Melbourne music community and whether she thinks the Bombers can bounce back after losing last weekend’s one point nail biter with Hawthorn. 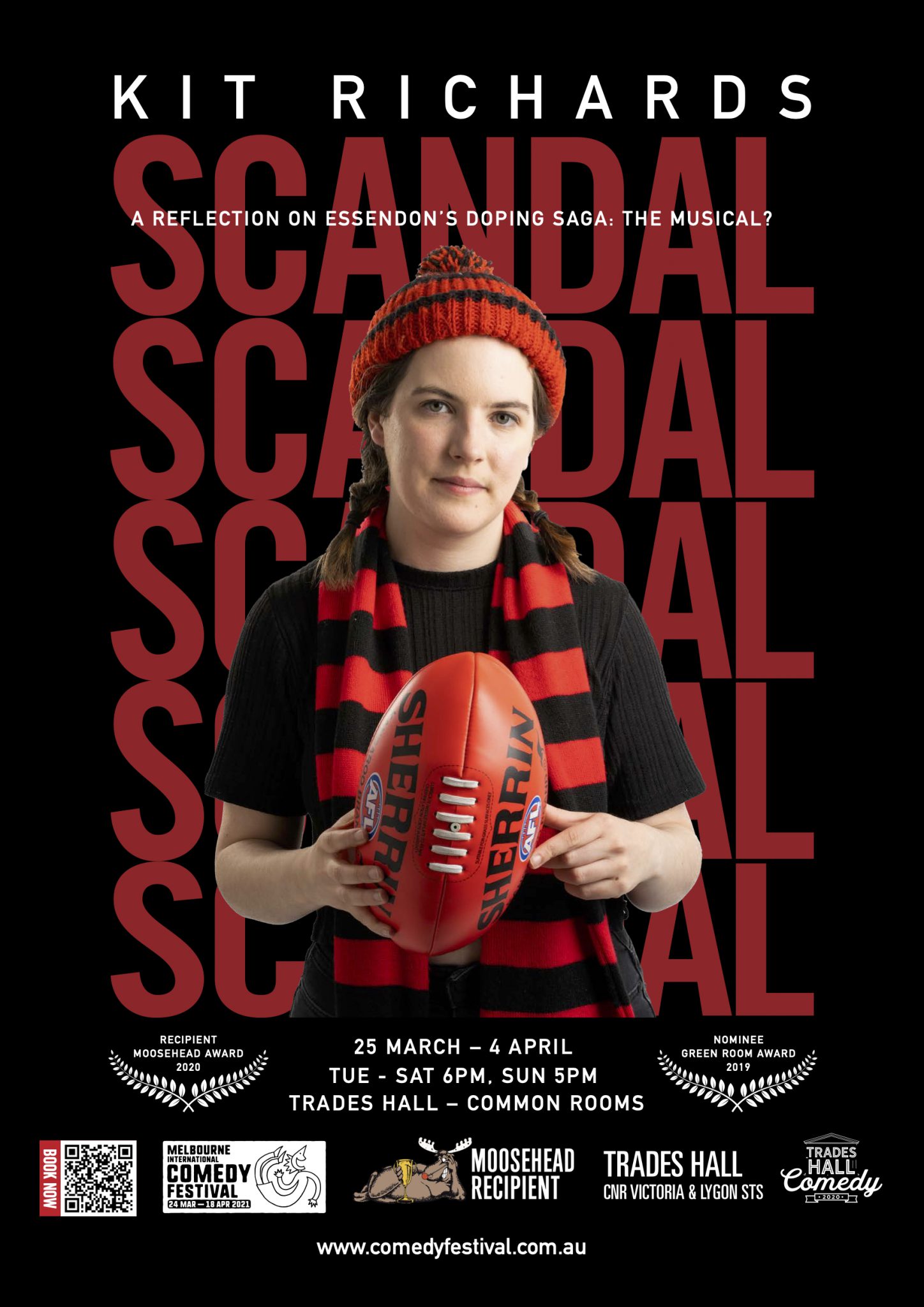 Hey Kit! First things first, how do you think we went last night against the Hawks the other night?

Oh god. I was there.

Oh you were at the game?

As soon as we started to let them back in was like, “Heere we go. Classic Bombers”. I mean, it was quietly promising, the fact that we were a few hopeful moments.

Yeah, it might be another one of those years. Second quarter was good.

So how would sell Scandal! to a die-hard Essendon supporter like myself?

I am also a die-hard Essendon supporter so I don’t really say anything bad about the boys. I’m completely on their side. I don’t admit at any point that they could be guilty, so it’s a show by a fan for the fans.

This show ticks so many of my boxes. How would you sell the show to a die-hard pub rock supporter like myself?

Well the music is all pub rock - the sound of football, in my eyes. All of the band members are in their own underground, indie-rock bands and they’re all insanely talented, so it’s actually just a good night of watching music as well.

I did notice all of the people playing in your band have been featured on Trouble Juice at one point or another as well in their own projects. How’d you meet everyone?

I went to uni with Elly, from Porpoise Spit, then I met Dom and Kelly through her, so mostly through Elly being a very cool band person. Dom’s mum was also one of my lecturers at uni as well, so pretty small world.

Have they contributed to the writing of the music?

Yes, I wrote all of the lyrics and they wrote about two or three of the songs. The rest of them I just came to them with a melody and chords from the piano, because that’s my background, I play piano. Though piano’s not really rock 'n' roll enough, so just brought it to them and they worked out how to play it in their own style.

Scott Edgar from Tripod has also been involved. What has his roll been within everything?

Scott helped with a lot last year, before the comedy festival was cancelled. He did a lot of dramaturgy with me, because I was going through the songs working out which bits would work where and he helped with workshopping it all.

And I imagine that’d be a pretty great experience?

Oh yeah, he’s an absolute legend. Not only in the comedy world, but he’s also just a really nice, down-to-earth person and likes to listen to ideas. He’s also a very talented musician, so I learnt a lot from him.

Touching on what you said before too, Comedy Festival last year was cancelled. This one has been in the works for a little while then?

So I had worked on it for maybe three or four months before Comedy Festival was cancelled last year. It’s sort of been bouncing around my head all year, but didn’t really work on it all that much until maybe November or December of last year.

With lockdown, like a lot of people, I didn’t really have the creative strength to do anything.

Yeah, I absolutely understand that. Excited it’s done then? It’s less than a week away now.

I open on Thursday! I’m actually really excited. We did a trial show the other day and that went really well. It’s all really exciting.

Yeah, I’ve got a song about about Jobe Watson losing his Brownlow.

Yeah. There’s another one called 'Ode to Hird'. Then the rest of it is about how I don’t think there’s any evidence and my history of supporting the club. It’s all told from my perspective, so it’s not just about the actual scandal, but about how it affected me.

Have you thought much about life beyond Scandal!?

I’m working on a show with a few friends at the moment, which is under embargo, so can’t talk too much about it, but that’ll hopefully be for Fringe. Then I’ve got a few ideas for shows I want to do next year for Comedy Festival. There’s also always the potential of touring this show as well toward Adelaide and Perth and stuff.

Touring it west, rather than north?

Definitely. I think I’d rather go to the places that traditionally have more of a football focus, so South Australia and WA.

Sounds amazing. Last question I have then is: Port Adelaide next week. Are we in big trouble?

Yes. I think we are. But as a long suffering Essendon supporter, I’ll always have hope.

That’s the worst bit isn’t it, the hope?

Yeah it is.
Scandal! A Reflection on Essendon's Doping Saga: The Musical? opens this Thursday, March 25th and will continue until April 4th at the Trades Hall - Common Room in Carlton. Tickets are available on the Comedy Festival website.
Kit Richards on Facebook
@kitrichardscomedy
Scandal! Event Page
Photo by Timothy Knight