Skip to content
Music / Features
DEA - A chat between Joe Terror
and Hollie Joyce
Words by James Lynch
Friday 25th June, 2021
On the first taste of his forthcoming sixth album, rock ’n’ roll workhouse Joe Terror has joined forces with garage-soul powerhouse Hollie Joyce to present the enigmatic and enthralling ‘DEA’. The track somehow manages to blend together their unique personalities while simultaneously existing in new territory for both of them - with its unnerving, hiccuping groove constantly wrestling with Hollie’s commanding spoken-word vocals and thunderous howls.

To dig into the new single a little further, we eavesdropped on a chat between Joe and Hollie.
Hollie: Hey Sherlock Bones, should we start cracking with this interview or what?

Joe: You’ve left me with no choice, Hollie. Let’s do it.

Hollie: So the album concept Queen of Smiles, Blues and the Devil, what the hell is that all about? Are you searching for some redemption or what?

Joe: Haha! It was a working title that I’d made up to try and draw more words that aligned as a bit of a storyboard that ended up sticking. I used to have this really bad recurring sleep paralysis dream - the classic one where you can see a demon and you feel it pinning you down and stuff. Quite terrifying. “The Devil” is the demon I used to see. During that period (around 16-17 years old) I was also obsessed with the blues. Looking back on this as an adult, I found it ironic that the blues has always had a sinister connection to the devil and wanted to create something out of the connection between the two in reflection of a time in my life when I was choosing the pathway that led to where I am in life now. Which happens to be a much happier person, full of smiles, surrounded by amazing people that create those smiles.

While we’re heading down this road could you explain what ‘Dea’ means? Where? When? How?

Hollie: Right! So the concept is the perception of the devil, which makes a lot of sense.  When you gave me this concept, I was thinking about playing the role of the devil as a woman, but after reading a lot about mythology and a little religion and history too, it was pretty clear that women were being accused of being evil or demonic already. I then wrote the lyrics intertwining the plethora of stories I had read, creating an abstract narrative following the journey of the instrumental. As it wasn’t based around one identity or story I needed to give it an indirect name and because my mother’s side of the family are Italian connecting me to a lot of the stories I was incorporating, I decided to call it ‘Dea’ (pronounced Daya), which is Italian for goddess. 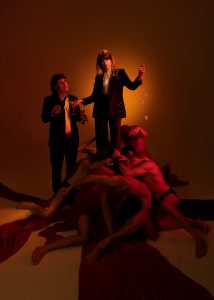 Hollie: When I was recording the vocals before the spoken word, I was trying to follow the instrumental track, which was actually pretty damn hard haha. Just when I thought I knew where you were going you surprised me. So, what were you thinking? Feeling? Or most importantly seeing when you wrote the music?

Joe: Writing for this project is usually quite a private environment. When I was writing/recording the track I was very uninhibited by distractions, yet it still felt super frantic. I was very focused on the rhythm and the groove which allowed me a certain freedom when it came to the melodic structure so it does jump around a little. Apologies for putting you through that! I remember feeling frustrated whilst I was doing the track (probably caused by a mix of the lockdown we were in at the time mixed with running around setting up recording gear before the idea slipped away) but found a whole lot of solace in switching off to my surroundings and entering a state of focus for a day. Those bursts of writing often feel blank in the mind until I talk to someone about it further down the track. Like it never happened or shouldn’t be touched. Weird.

One of the things that blew my mind the most with your vocal performance was those belting screams. What was going on there? It makes me picture the microphone exploding during the take.

Hollie: Ha! no way, the chaos is the best part. I can totally see you writing it like that. Listeners won’t get to hear it but the instrumental on its own captures that.

Hahah as in, how was I doing it? Or... as in should we have a heart to heart?

Joe: I thought this was a heart to heart? I guess I mean that some of the vocal layering that you are performing behind your spoken word parts are packed with energy. I’ve seen your performances and I know you’re always full of energy but how did you end up in that zone whilst recording the track?

Hollie: I listened to the track loudly as if I was in the room with you and thought, who or what do I need to be to fit into this song? And naturally I just matched the energy that you captured, picking up what you were putting down. For example, that part where I was screaming was more of a response to your guitar part - it felt like your guitar part needed an answer.

Hollie: If you could be a fruit what would…
Jokes ...

How does the song make you feel now that it has morphed into what it is and now has a concept?

Joe: I feel proud to have laid the foundation for such a strong message when I hear it now. When I completed the song as an instrumental, I knew it had more potential, but I needed to remove it from myself in order to achieve it. I’m not sure why but that was the urge. I am so glad that you have taken it where you did. I have learned so much from your research along the way.

Hollie: Well your support and encouragement gave me the inspiration and tenacity to experiment, create and to express freely without judgement so thank you. It has been a pleasure working with such a damn good musician as yourself and I can’t wait for the gig, fingers crossed sooner than later.

Alright Indiana Bones, shall we call it a day?

Joe: Thank YOU my friend. I suppose we’d better save some words for another day. Fare thee well neighbour!
'DEA' is out now in all the usual places. Joe Terror's forthcoming album Queen of Smiles, Blues and the Devil is set to drop later this year.
@joeterrorband
@holliejoyce_
Photos by Robyn Strathearn