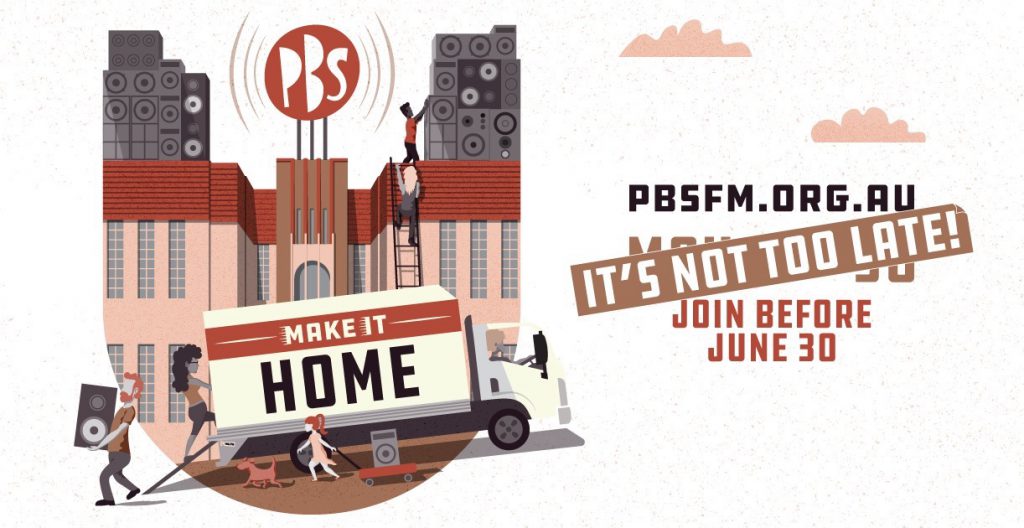 PBS FM’s radio festival might have finished at the end of May, but the excellent crew behind the beloved community radio station have very generously extended the celebrations… until tonight! Everyone who joins, renews their membership or honours a pledge before midnight tonight goes into the running to win some huge prizes - including a handmade guitar, a year’s worth of albums or even a Vespa.

Plus you’ll be supporting one of the most important institutions in Melbourne’s local music scene, as they embark on moving PBS FM from Easey Street to their new home at Collingwood Yards.

As the team make one final effort to 'Make It Home' before the radio festival ends tonight, we got in touch with a few of our favourite presenters to find out what PBS means to them.
Elle Young - Headhunters 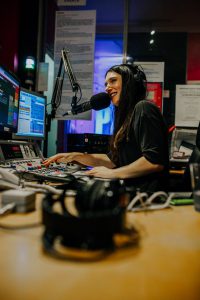 For the unacquainted, who are you and what do you do?
I have presented Headhunters on Mondays 5-7pm on PBS FM since 2017, which focuses on interesting new and old music from our backyard, to all around the world. I am firstly a musician and vocalist and also a DJ. I work as label manager at Brunswick’s soul and funk label Hopestreet Recordings, and run music PR and radio servicing side project Midnight Snack!

How’d you get involved at PBS?
I started off as a volunteer and hardcore fan! Then I was given the chance to do the announcer course and realised how much I loved talking about and sharing music. I submitted my first demo, and not long after that I was given a graveyard shift where I honed my skills for 1.5 years on my program Tropicalia! The rest is history.

What does community radio mean to you?
I wouldn’t be the human I am today without it! It links listeners into the true movements of Melbourne’s music and arts community in real time - you can plan your weekend around hearing what shows are happening where, learn and grow your musical tastes and ear and become acquainted with voices and stories that will expand your understanding of community, our world and more.

Tell us your favourite anecdote from being part of the PBS family.
The PBS text line is the only phone number I know off by heart, apart from my mum’s. 0400 03 1067 (that’s the PBS text line, not my mum’s).

In the spirit of this year’s radio festival theme Make It Home, what makes you feel at home?
As a Taurus, home is my favourite place! I feel at home when there’s some very good mood lighting, a great record playing, my favourite people are sitting near me (and perhaps a dog) and there’s delicious food and wine in reach.

For the unacquainted, who are you and what do you do?
I co-host Homebrew on PBS with the delightful Maddy Mac every Monday afternoon from 3pm ’til 5pm. We endeavour to bring the best of music from our shores to the airwave each week, alongside interviews with local and touring artists.

I also play in bratwave duo Hearts and Rockets, write and play as Astral Skulls, and run DIY music and zine label and events collective Psychic Hysteria. For money, I actually work at PBS and am a freelance publicist.

How’d you get involved at PBS?
After moving to Melbourne in 2014, I quickly got around the amazing community radio that this city has to offer. My first job here was delivering wholesale coffee around town, and PBS was my go to while battling Melbourne traffic. I fell in love pretty quickly. The first contact I had with the station was coming in for interviews about Astral Skulls with Nick Brown, back when he was hosting Lonely Stretch on Monday mornings. After that I started hanging around Easey Street like a bad smell. I was super lucky to get a job at the station in 2016, and have worked here ever since! I joined Maddy co-hosting Homebrew in March 2020, and it’s become such a massive and wonderful part of my life.

What does community radio mean to you?
Community radio has been a significant part of my life since my early teens. I hosted my first show at age 13, and have hosted a number of shows at different stations since, as well as working at 2SER in Sydney and now at PBS. But it’s more than that. It’s the glue for me, for all the bits and pieces that I work on, it’s the bit that binds it all together. It’s such a huge part of the community here in Melbourne, and I can’t imagine my life without it.

I love tuning into my favourite shows and feeling a direct connection with that announcer - it’s like they’re taking the music that moves them and sharing it directly with me. Then, I can also step back and remember that it’s not just me, and that thousands of other people are sharing the experience. It’s both of these things separately and all at once and there’s nothing else like it.

Tell us your favourite anecdote from being part of the PBS family.
So much has happened to me at PBS and because of PBS, and I’ve been so lucky to meet and chat with so many incredible artists. One meeting that really stands out to me, though, was when Dead Moon’s Fred and Toody visited the station in late 2016 to play a duo set in Studio 5. A few sneaky fans came in to check it out, and while they say to never meet your idols, those two were so lovely and down to earth. Then, being able to watch them perform in such an intimate setting is something that I will never forget.

In the spirit of this year’s radio festival theme Make It Home, what makes you feel at home?
Yummy home cooked food, morning coffees in the backyard with my doggo Bonez, crackly records on the stereo and board games on the couch. As much as I love going out and seeing bands and seeing friends, I just love spending time at home. PBS is kind of my second home! I love hanging out there, too, and feel super privileged to be able to do so. 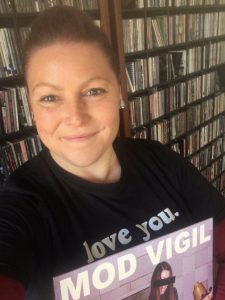 For the unacquainted, who are you and what do you do?
Every Tuesday afternoon from 5-7pm I present Firewater, a place where dirty rock ’n’ roll meets any type of low-down beat on your radio, rock and rhyme with a lot of fuzz. I spend the rest of my week doing policy and stakeholder engagement work for First Nations Media Australia, the national peak body for the First Nations media and communications industry, which involves a lot of advocacy for community broadcasters.

How’d you get involved at PBS?
I started volunteering in 1996 when I was still at high school. My early roles included stuffing envelopes, putting CDs away in the library, filling out cart schedules - but mainly hanging out in the kitchen at the Ritz Mansions, Fitzroy St and soaking up all the music knowledge I could from the wide and wild array of people coming in and out of the studios there. I loved it so I kept turning up every week for years and years.

What does community radio mean to you?
Community media is about independent voices sharing information, music and ideas not represented in mainstream media. It’s the antidote to oppression and a celebration of diversity in all its forms. It’s democracy, it’s social cohesion, it’s revolution or revelation, it’s the vibe. To me, connecting listeners to ideas and cultures they wouldn’t encounter elsewhere is really important to create the community we want to live in. At PBS, we do that through music.

Tell us your favourite anecdote from being part of the PBS family.
Oh wow, there are so many. Coming over to Easey St for the first time and seeing the space that would become Studio 5 for the first time was so exciting - back then it seemed so big! There have been too many amazing performances in that room to choose one. But some of the best times I’ve had at PBS have been OBs - Cup Day Kaos, Apollo Bay Music Festival, Queenscliff Music Festival, the VB Alive series which was manic (something like 24 OBs in two weeks), Corner Hotel gigs, Tote front bar. A tracksuit dance-off with Ruari from Fang It in Apollo Bay that still makes me laugh when I think of it. Very funny road trips with the team.

In the spirit of this year’s radio festival theme Make It Home, what makes you feel at home?
Good music and good people - PBS has plenty of both! 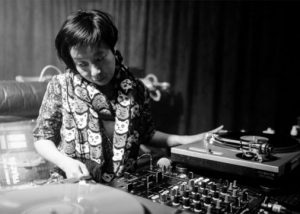 For the unacquainted, who are you and what do you do?
Hi I’m Shio and I present a jazz show called Eternal Rhythm on Thursdays 11am-1pm on PBS radio. I’m also a DJ and a record shop lady at Wax Museum Records. Plus I am a very jazzy cat lady! (yes I love cats)

How’d you get involved at PBS?
I was lucky to be invited to do a radio training course with PBS that was especially aimed at including voices of woman and women identifying people from various background on the airways. I’m one of the presenters on a show called Cross Pollinate with other announcers who have since completed the same course. And since 2018, I have been given a permanent jazzy spot presenting my own show, Eternal Rhythm.

Head to pbsfm.org.au and help the team 'Make It Home' by joining up, renewing your membership or donating before midnight tonight, and you'll go in the running to win a stack of prizes.
pbsfm.org.au
@pbsfm