Skip to content
Music / Features
Grounded -
A chat with Josephine Croft and Jesse Richards
Words by Daniel Devlin
Tuesday 21st September, 2021
Confirming our deepest existential fears, Grounded is a new Melbourne short horror film from actor, writer and producer Josephine Croft, that builds around an unforeseen nightmare of waking up alone on an abandoned, desolate aeroplane. Alongside director Jesse Richards, we caught up with the duo behind Grounded to unpack the themes, inspiration and genius of the film.
An empty plane cabin sets the scene - it’s dark, sinister and painfully quiet as a woman awakes trapped. Filmed on location at Victoria’s Avalon Airport, Grounded embodies an authentic horror spirit, tackling themes of disquiet isolation through an ageing, dilapidated aeroplane setting. Caught in a bind of fear and confusion, the nightmarish environment of the film follows one woman’s plight of desperate escape and survival.

Ahead of the film’s imminent premiere, we caught up with Grounded creators Josephine Croft and Jesse Richards to help unpack the themes, inspiration and genius behind their work below.
TJ: After a long career in acting, Grounded is the first project with your own writing behind it. How would you describe your experience in both writing and acting for a singular project?

Josephine: I loved it. I've never really seen myself as a writer, but wrote this film pretty quickly one afternoon. I put it away wondering what I was going to do with it and then it wasn't until someone else read it and said they thought it was good that I decided to actually make the film. Because I wrote it, I was allowed to play with the lines on the day of filming. If I thought a line wasn't working, I didn't have to get anyone's permission, I could just change it. Or if Jesse wanted to change something, we could just improvise there and then. Jesse also had a say in the script too. I wanted him to have ownership in it as it was his creative vision. The day after we wrapped, I was on such a high. There is something very special about taking something from an initial idea through to your vision, performing in and seeing everyone do their thing to make it come together. It's been the greatest creative moment of my life.

Australian cinema has a rich history of great horror, with Grounded only adding to that. Are there any particular films/filmmakers that helped inspire the story behind Grounded?

Jesse: It absolutely does! And not just great within our continent but on the world stage. Some of the scariest films have either been filmed IN Australia, or by Australian filmmakers - think Wake In Fright by Ted Kotcheff (Australian film, Canadian director), Saw/Insidious/The Conjuring, from James Wan (American films, Australian director), The Babadook by Jennifer Kent (Australian film and director), as well as Snowtown, Wolf Creek, The Loved Ones, and many, many more. Josie and I are huge fans of the genre and I loved being able to mention a horror film and she’d be like “yep - loved that one”, I just knew we’d have a blast making Grounded.

I’d say in terms of inspiration, for me, James Wan is always a big influence in general. I love the way he makes movies, I think he has such an instinct for filmmaking and horror specifically, so his films are always a big one for me. And maybe even more specifically, The Conjuring - in my opinion a perfectly paced horror film true to its core, utilising everything the genre can offer. A feeling of dread, suspense, jump-scares, eeriness, horrific visions and nightmarish distortions of the human form - just the whole lot.

Grounded tackles themes of isolation and dystopian dread - some particularly potent fears being felt by people all across the world right now. Although perhaps written prior to the current pandemic, how have the last 18 months helped shape Grounded?

Jesse: It’s funny because even though what I’m about to say refers to certain production elements, being on that plane while we filmed and seeing it weathered, and the natural decay the elements have brought upon the empty vessel was actually, kinda peaceful. Spooky, but peaceful. And I can’t help but feel like that, as you said “dystopian” feel, comes with that idea of a secret yearning for the absence of our day-to-day stress and 21st century prisons we’ve put on our lives, be that conforming to the status quo or becoming thirsty for something more than the 9-to-5 rat race. But of course, as you’d imagine, that peaceful mindset was only present because at all times I could escape it, and within metres, I had access to human contact! Two integral human needs that our protagonist Anne could not reach.

In terms of the story specifically, and how the last 18 or so months have shaped it, I think our characters desperation to be out of that space and perhaps even Anne’s attitude towards the start of the piece in opposition to that (used to isolation) have been amplified by the events of the past year and a half. It almost ran parallel to what was happening around the world, (certainly in Australia) that being, that we simply could not fly. The vision of grounded (sorry, accidental plug) aeroplanes on tarmacs, and airports becoming desolate wastelands you would expect to see in a dystopian future was a vision we had all seen, or at least knew in some way.

Having acted, produced and written Grounded yourself, how did you first take the leap to bring the idea to life?

Josephine: This film came together pretty easily actually. I didn't find a lot of resistance. I first sent the script out to Jesse, who was recommended to me by a friend, and then we met for coffee and decided to go ahead with it. From then it was just about finding a crew and finding a location. Avalon was my first pick for the plane and we got that thankfully, even though I didn't think I could afford it at the time. I did have a bit of trouble initially finding money to make the film and then of course Covid hit, which delayed us by about a year. Jesse had a team of people he usually works with who he kept to jump on board and work with him, and then I found others through working with them on other projects and also through social media. My social media manager, Dayna, was one of the first people to see my post on Facebook. The next day we had coffee and now we've been working together for over a year! It was mainly Jesse, me and my production manager Montse who got the logistics up and running though.

Springing off of that, how did you find the process of working with director Jesse Richards? Were there any particular sequences in Grounded where his impact on the film stood out to you?

Josephine: Working with Jesse was just awful, NOT! From the moment we had coffee Jesse and I clicked. We have a similar sense of humour and I had so much fun working with him. Because of his background in advertising he also has such a great handle on so many aspects of film-making. He can make great pitch documents, he can double up as the first AD on his shoots, he knows how to stick to the schedule and he also knows how to do all that with a continuous smile on his face. He was always smiling and giving lots of energy to his cast and crew. He also has a great understanding of working with actors which not all directors have. He was so great at giving me confidence in what I was doing. I trusted Jesse 100% so I had no issues handing over the film to him and saying "this is yours now". We had an agreement that when I was on set I was just an actor - not a writer or producer. Despite having seen some of his storyboards I had no real idea of what the film was going to look like until I saw the first cut.

Filmed on location at Avalon Airport in Victoria, Grounded takes place inside a remote and eerie aeroplane setting. You have stated before that you knew the location had to be a plane for this particular story - after seeing your vision come true, how do you feel the setting impacted the film?

Jesse: So much! Josie and I talked at great length about whether we could change the location of our story (entirely due to budgetary and scheduling concerns) and in the end, we realised it HAD to be on a plane. Any other type of transport had less impact on our characters' paranoia and was less claustrophobic. We also wanted to put our character in a strange and unfamiliar environment - how often would you find yourself alone on a plane with no exit? It’s so nightmarish, it was just perfect.

Inside the plane itself - the air was just, so, dead. Like, you could yell and the environment would just suck away all sound after a few meters. And once we pumped it full of smoke and haze, the same could be said for sight. It really is the perfect, spooky, creepy, anxiety-inducing location a horror fan/filmmaker could hope for. 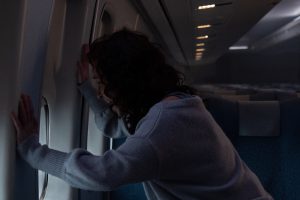 Producing a film can often be an expensive and time-consuming process (particularly with delays and reshoots being a common occurrence in today’s entertainment climate). How did you navigate each hurdle you faced when bringing Grounded to life?

Josephine: Unfortunately it's almost impossible to make money from short films so trying to finance a short is fairly impossible. You need to rely on crowdfunding, savings or just be prepared to go into debt. In my case, I was extremely lucky to have my parents-in-law give me money to make the film. I felt a little awkward about asking them but they were so amazing and said yes straight away. I did try to look at getting sponsorship but this became almost impossible when Covid hit. Obviously, all airlines were losing money by the day, so we weren't going to get money from them while most other companies were tightening their purse strings. We managed to shoot everything in 2.5 days and all of our amazing cast and crew worked at lower rates, so we really appreciated them for that. And we got super great deals on everything including post-production and the plane. I think people are really great when it comes to short films - they understand how hard it is to get funding for them. I wish I could have paid my crew full rates, I really believe in respecting people's time. Obviously, the lockdown was a big hurdle but we couldn't do much about that except wait. There will always be hurdles though, that's part and parcel of producing. Sometimes you need to stop and wait for a better time and sometimes you just need to be creative around the problem. Most of the time there is a solution!

With Grounded about to hit the film festival circuit, what are you hoping audiences might take away from their experience watching your work?

Jesse: I’m always open to people’s interpretation and I’d be happy with any takeaways to be honest, as long as the film made you feel something - I’m happy. I’m hoping, if I may, that people might come out of it having felt a sense of dread, and isolation, and that they can reflect on the importance of human connection, and (especially with the recent events of the last 18 months) how the very human fear of becoming socially isolated can affect your mental health.
Grounded is currently doing the rounds on the international film festival circuit - follow their socials below to keep up to date and find out where you can catch the film next.
Grounded on Facebook
@groundedtheshortfilm