Skip to content
Music / Events
Trouble Juice do FLOW Festival
Words by Will Brussen
Thursday 2nd December, 2021
As Melbourne begins to reopen, we were lucky enough to head along to FLOW Festival last weekend in Footscray. With a sense of renewal in the air, it was a gloriously relaxed day with excellent vibes and some of the best funk and soul this city has to offer.
As the early birds started to filter their way into the festival site, which was set on a hill at the Footscray Community Arts Centre with the picturesque Maribyrnong river behind the stage, Shio gently eased those arriving into the day with her percussive piano vibes. On interstitial duties throughout the day, she did an excellent job of pairing the vibe with what was coming up next.

The welcome to country provided by Boonwurrung Traditional Owner Gheran Yarraman Steel was heartfelt and provided a sense of grounding for the day, reminding us whose land we were meeting on and the importance of this. Gheran invited us into the space and encouraged us to come with purpose; he mused on the purpose that linked us on the day, celebration, and left us anticipating a great day of celebration ahead. He then told the creation story of Bunjil. A take away message of this was to “be here with love and respect”, which I think is a unity that bound us for the day as a community that came together. It was delightful to be surrounded by so many kind, smiling, and caring individuals for the day.

Kee’han was the first artist up for the day, who quickly got the crowd into a groove with her soulful and playful take on indie-pop. Kee’han made sure to get the crowd involved with a clap call and response early as she sang about the land we are on. As the sound washed over the crowd settling in on the hill, she explored the full spectrum of human emotions, in telling stories in her music about her own personal experiences from songs about her First Nations identity to tracks about breakups and the many intricacies in between. Though in the festival setting, there was still a great sense of intimacy, showcasing indie pop sensibilities with a powerful soul undertone. Kee’han shared with the crowd that her name means to dance and to play, and the playful vibrancy that shines through in her music was so apparent.

Fully leaning into her R&B tendencies, she pulled out a funky cover of Childish Gambino's ‘Redbone’ that flipped things around and let her vocal range really shine through. Behind her, the band held down an infectious groove and Kee’han’s stunning vocals lifted over the top of it all. Backing up this special moment with the rather tender ‘Better Things’, a beautiful meditation on mental health and working towards being your best self, which felt especially special to see in this setting. 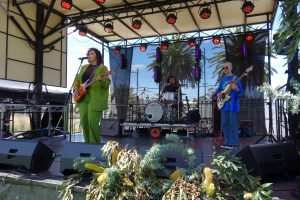 Nestled in the day on a side stage between Kee’han and Emma Donovan and the Putbacks was Trad Ukiyo, a band that I wasn’t too familiar with but glad I caught their set; their blissful and mesmerising neo-soul was just what I needed at this point in the day, a nice pre for Emma Donovan. With a unique take on a genre that has carved out a scene in Melbourne for some time now, they are definitely a name to keep an eye on.

As soon as Emma Donovan and the Putbacks started with their groove, the crowd knew they were in for a funk treat. A dedicated section of the crowd got to their feet early to dance, which only swelled in number as the soulful goodness unfolded on stage. Fitting the full band, all 8 of them, on stage was no mean feat, and as a crowd member you could feel the passion that each member of the band exuded, but especially in Emma Donovan herself. And it was infectious, as they launched into ‘Don’t Give Up On Me’, the groove of which provides the perfect platform for Emma’s stirring and powerful vocals.

Songs of resilience packaged in the most joyous of ways, it is equal measures Aretha Franklin and Nina Simone as well as Warumpi Band and Coloured Stone, a vital band in the Australian musical landscape. A truly special moment, Emma played a song that was passed onto her by Aunty Ruby Hunter, and reminded us of this strong and important tradition in Aboriginal culture. It was a family friendly event, and this was evident in Emma’s endearing banter with one of the kids in the crowd who was having the best time dancing. And also shouting out her sister Aretha Brown who designed the album artwork for the latest album, who also seemed to be having a great time boogieing up the front. 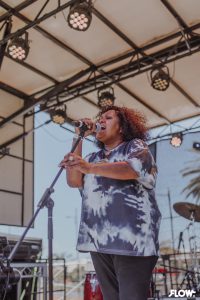 Next up, Dallas Woods made his presence known immediately, proclaiming to the crowd “they don’t know me”. Spitting truths about growing up as a young First Nations man, namely focused around police brutality, as well as suicide, Dallas dealt with some heavy subject matter throughout his set yet is an excitement machine, with a cadence and flow that doesn’t let up. He truly had the crowd in his palms, especially at a moment where the beats took a pause for a heartfelt spoken word piece, leaving the crowd in silence as everyone took it in. When the beats resumed, as did the dancing and Dallas’ rhymes were slinging - things went to the next level on the hard hitting ‘Hoodlum’ and the crowd responded, it was a huge boom bap energy. Another special moment was when he got Kee’han up on stage for ‘Strangers’, Kee’han once again taking over the stage with her stunning vocal delivery. 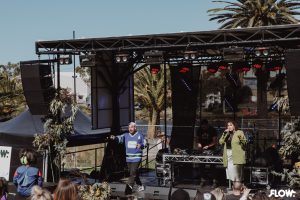 Sharing the set with Fly Boy Jack, there was a smooth transition as vocalist Jordan Dennis took over the stage. The beats still rattling and Jordan showing impressive vocal dexterity, for a new act Fly Boy Jack absolutely owned the stage. As the set unfolded the beats got weirder and more off-kilter, and the vocal delivery more adventurous to match. Jordan took crowd participation to the next level as he literally joined the crowd to rap in the middle of the rapturous audience. Moments later, Dallas Woods returned to the stage to perform a teaser of an upcoming collab album. The pair were rapping about madness and chaos and as they were out in the crowd, it felt pretty apt that the lyrics matched the vibe. 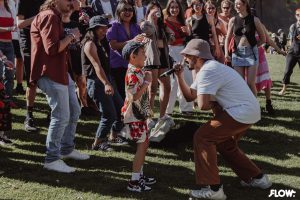 Kgomotso was a dance floor filler on the side stage, and while Mildlife’s set approached, Shio treated the crowd to appropriately whimsical and sonically adventurous jazz to get us prepped for the award winning future jazz outfit. Mildlife lifted us into orbit and had us entranced for the entire set. There was no stop for a breath, it just left like one continuous jam, and the band were so tight, it almost seemed that they were telepathic with each other. The late afternoon wind hit through as Mildlife were playing but it didn’t seem to deter the crowd who were dancing and swaying along to the groove. 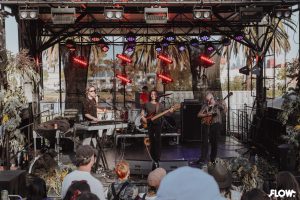 CFRIM crashed onto stage and bought the heavy bass, big shift in gears but a clear signal that it was party time. Although she typically plays in the early hours of the morning, people were already down to party and her set translated well at this time slot, getting the whole hill heaving. As the sun set over the Maribyrnong river, Calle Luna Latin band and their rhythms got those who remained well and truly moving. Winding down from CFRIM’s hard hitting set, it was the ideal way to close out the day with one final chance for a dance.

When reflecting on FLOW festival, the overwhelming emotion of the day was that of joy. The teams at The Operatives and Foreign Brothers put together such a sensational day, and it was clear that everyone was just stoked to be there, connecting with one another once again.
flowau.net
@flow_au_
Photos by @duncographic and Kara Brussen