Skip to content
Music / Features
They Made Me Do It -
Talking Influences with Nighteyes
Words by James Lynch
Tuesday 8th March, 2022
Off the back of the release of ‘Lowlight’ last week, we caught up with Nighteyes to uncover some of the inspirations behind her immersive debut offering of electronic-tinged alternative rock.
A seemingly unstoppable force within the Melbourne music scene, multi-instrumentalist Rachel Trainor has an extensive list of projects to her name (Honeybone, Badgers, The Merindas, Coda Chroma…) while also currently on tour with contemporary circus production The Defiant. Between all her commitments, she’s also found time to launch her brand new solo project Nighteyes, with the release of her hauntingly powerful debut single ‘Lowlight’.

Blooming open over its five-minute runtime, ‘Lowlight’ plays as a gradual and enthralling introduction into the evocative universe of Nighteyes, while also revealing the vast scope of the burgeoning project. Blending hard rock, a genre Rachel is no stranger to with her work fronting Honeybone, with otherworldly electronica, the track expands around an uncanny tangle of dense distorted guitar, alluring vocal hooks and undulating programmed beats. This amalgamation of influences gives ‘Lowlight’ a disorientating atmosphere, however the push and pull within the track makes the soundscape all the more compelling, especially so as the layers surge forward like a power shock in the final minute before dissipating menacingly in its dying moments.

With its contradictory elements enhancing the potency of the track, it’s fitting that the intent behind ‘Lowlight’ came from a similar place, as Rachel shares, “I had a vision in my mind when I wrote this song of the particular kind of light the moon emits, how it doesn't entirely illuminate the dark and makes scary shadows out of things that would be benign during the day. The lyrics in the verses weave fear and paranoia into what would typically be a peaceful moonlit night, exploring the state you can get into when you're so anxious that even the trees seem menacing."

To journey a little deeper down the rabbit hole with Nighteyes, Rachel kindly shared some key influences behind ‘Lowlight’ with us.

This song was the first of Chelsea Wolfe’s that I heard, and I was immediately struck by the helicopter-like arpeggiated synth, heavy drums and evocative lyrics. I remember thinking, “this is the kind of music I want to make”. ‘Feral Love’ creates an intense feeling of unease both musically and lyrically, with the lyrics urging the protagonist to run away from an unnamed threat, ‘the light’, naming the night as the safest place to hide. It’s interesting as that’s the opposite of ‘Lowlight’ where the light is what brings safety, however there are definite parallels of opposing forces, dark/light and a deep sense of disquiet.


‘While The Ages Steal’ - Giants

Giants’ Old Stories is one of my most played albums on my Spotify, and the opening track ‘While The Ages Steal’ has the most beautiful melodic guitar lines in the first section building up to a gorgeous soaring chorus section. One of my favourite features of the post-rock genre is the heavy focus on melody and Giants do this so well in this song. When I recorded the chorus for ‘Lowlight’ I wanted to capture some of the post-rock melodic magic of ‘While The Ages Steal’ in the guitar line, using a bunch of reverb to create space and separate the chorus section from the heavier verses. It also works well with the theme of the lyrics in the chorus, inviting the listener into the light and creating connection. 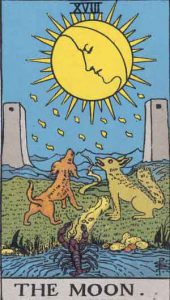 The Moon Tarot card is so evocative, with the moon shining down on a dog and wolf, symbolising our conscious and subconscious, and the towers on each side representing the opposing forces of dark and light, good and evil (and how they can sometimes look very similar). The Moon tarot card can represent the fear and anxieties that come out in the dark, illusions that in the light of day would be benevolent (like a pile of laundry on a chair or a robe hanging off the door, a negative thought that sends us into a spiral). The light of the moon sometimes creates menacing shadows, but we can banish them by connecting with the light, with our communities. The ‘Lowlight’ verses instil that sense of anxiety and fear, of seeing things in the dark, but when we lean on our support systems we can overcome our fears and connect deeper with the world around us.

‘Macbeth shall never be vanquished be until Great Birnam Wood to high Dunsinane Hill Shall come against him.’

The idea of walking trees has always fascinated me, and when the three witches of Macbeth say the above line, Macbeth takes it literally; ‘Who can impress the forest, bid the tree Unfix his earthbound root?’

It didn’t end up that way for Macbeth as the English soldiers use branches from the wood as camouflage before their attack, but had he considered the witches’ advice while grounded in reality, perhaps he would have had a different outcome. In ‘Lowlight’s second verse I sing “Hear the trees call / They will find you alone / And bring your bones” which evokes a similar vision to what Macbeth was thinking of, literal trees that can walk and attack, and shows his descent into paranoia while he continues his murderous plot to secure the crown of Scotland.


My own experiences with anxiety

I draw so much influence from my own experiences in my songwriting, and anxiety is something I am very familiar with. I know the feeling of being literally scared of the dark as a child, to believing negative thoughts, the tightness in the stomach and the shortness of breath. I wanted to explore this in ‘Lowlight’, when you’re so anxious that even the moon, the trees and the ocean tide can seem out to get you. The way I’ve dealt with these feelings is through connection; connecting with friends and loved ones, with the wider community and also with my love of nature and my own spirituality. The line “Look to the stars” in the chorus is an invitation to gaze at the heavens, knowing we are part of an infinite universe and no matter what your spiritual or religious beliefs are, there is always something comforting in the night sky with the constellations gazing down at us, confirming we are never alone.
Follow Nighteyes below to keep up to date.
nighteyesmusic.bandcamp.com
@nighteyesmusic
Photo by @rcstills