Skip to content
Music / Features
Jenny - A chat with Watty Thompson
Words and interview by James Lynch
Wednesday 6th April, 2022
Ahead of his upcoming single launch this Friday at Shotkickers in Thornbury, we caught up with burgeoning singer-songwriter Watty Thompson to delve into his latest serving of heartfelt country-tinged folk.
He can probably tell you the story better himself, but after years playing in rock ’n’ roll acts around Melbourne, Watty Thompson decided to leave town and swap the big riffs out for something a little sweeter. He shared his debut single ‘The Beauty That Surrounds Ya’ in the second half of last year, a stunning dose of folksy Australiana that scored a spot in our Top 50 songs of 2021, and his latest single ‘Jenny’ is just as compelling.

Expanding on the sonic landscape that Watty welcomed us into on ‘The Beauty That Surrounds Ya’, ‘Jenny’ builds around a simmering country groove, filled out with a lilting guitar strum, sweeping strings and the serene chime of a lap steel. At the centre of the track is Watty’s booming vocals - equally unassuming and loaded with character, he weaves an affecting story about his experiences expressing himself, and it’s not hard to get caught up in the moment as the instrumentation swells around Watty’s unfiltered delivery. As the press release eloquently puts it, it’s a “beautifully nuanced exploration of emotion, expression, and the things we oh-so-wished we said”, and the track truly shines in its ability to showcase all of Watty’s heartwarming charisma while simultaneously highlighting such a universal topic at its core.

To celebrate the new tune, we got in touch with Watty to find out what he's up to.
TJ: G’day Watty! We had the pleasure of premiering your debut single last year, but for those not yet acquainted with you, what’s the story?

WT: Thanks for that premiere Trouble Juice! That was really lovely of you. My name is Watty Thompson and I've emerged from the bush of South West Victoria in recent times as a bit of a folk singer of sorts.  I had a blast playing in rock and roll bands in the past but a couple of years back I left the big smoke and returned to the countryside to pursue this music that I'd long desired to write. It’s heartfelt storytelling kind of stuff backed up with lush musical accompaniment. It's a little bit folk, a little bit country, comes from the heart and feels very good to perform.

It doesn’t take much detective work to understand what your latest single ‘Jenny’ is about, but what inspired you to tackle these themes in a song?

The song came about a few years ago after a wake up call moment when my darling Bertha made me realise that being emotionally supportive through words really wasn't a strong point of mine. Although I have a kind heart and am very compassionate, I just couldn't piece together meaningful words of support when Bertha was in times of need. Upon reflection it seemed that this boiled down to me never having learnt how to express some of my own emotions. If you can't talk about your own emotions, then it can be hard to offer words of support to someone about theirs.

In light of this, I wrote this song and played it to Bertha. In a way, it was my way of promising her that I'd work on myself and one day be better at expressing my emotions and being emotionally supportive. In turn it also became one of my favourite songs to perform live. I'm happy to say that since penning the song I have improved greatly in talking about feelings. I'm certainly still not incredible at it but we all continue to grow as humans and I'm on the right path.

Something that stands out about ‘Jenny’ and previous single ’The Beauty That Surrounds Ya’ is how comfortable you sound sharing your thoughts via song, particularly in such a supportive and straight to the point fashion. Does putting your thoughts and emotions into song form come easily for you? And how important is being upfront in your music to you?

These are very thoughtful questions thank you. Yes, putting my thoughts and emotions into song does come easily. More so than talking about them in real life ha. That's probably because I've got time to sit and decipher my thoughts and slowly translate them into fluent words that sound nice together in song as opposed to having a conversation in real time and getting a tongue tied when trying to express something fluently.

Being upfront with this music is very important to me. A main goal as a musician is to connect to others and I'd like to sing about some truthful things that will hopefully make listeners feel something. If feeling something can help them out in any small way then that's even more of a victory.

'Jenny' is a good example. I've seen it resonate with people as the theme reminds them of themselves or their partners. Maybe hearing the song will make some people who can relate to it reflect and think "shit I do need to work on myself more to be able to express my emotions and be more emotionally supportive my loved ones."

I reckon if I'm lucky enough to have my music heard or to perform on a stage I might as well be using the platform to sing about things other humans can relate to potentially evoke some good thought. That's the plan anyway but we'll see what the future holds. Occasionally I might still like to sing about something silly.

The new single has also come paired with a pretty spectacular looking clip. Can you tell us how the video came about?

Sure can. I've always enjoyed watching footage of live performances on olden days variety TV shows. Especially old footage country bands. I love the cheesy sets and aesthetic. We wanted to replicate this vibe. The clip was inspired by one old video in particular of a performance by Pete Drake & his talking steel guitar. Check it out. The set we built was based on the set in this old video.
My cinematographer mate Max Rawicz who also filmed the video for 'The Beauty That Surrounds Ya' has a knack for bringing visions to life. During an evening of winding down in the brewhouse after wrapping up 'The Beauty' shoot in winter of 2021, I filled Max in on the concept for the 'Jenny' video. His mind had been ticking since. We hired an old bush hall down the road in Yeodene and with the help of some materials laying around, some good friends to help with construction and a beautiful hand painted backdrop, it all came together very smoothly. The hall only gets used for carpet bowls these days and hadn't seen action like that since its last bush dance decades ago. I think we're the first band to perform in there for over 50 years. Very thankful to have had such a supportive group of band members and friends helping to bring the vision to life. We're very proud of the results.

There’s been whispers that a debut album is on the way - if we may ask, what’s coming up next for Watty Thompson?

The whispers are true! There is an album on its way. There are a few live performances coming up in the meantime including a single launch for 'Jenny' this coming Friday April 8th at Shotkickers in Thornbury, a run of Victorian shows with Sydney's Caitlin Harnett and The Pony Boys over the first weekend May, a concert in Geelong with Melbourne country stalwarts Foggy Notion on Friday May 13th plus a few others ones to be announced. At this stage it looks like you can expect the album to land early in Spring. Jump on the internet and follow the Watty pages to be kept well informed.

And to wrap this up with a classic TJ question, what’s your perfect Sunday?

Strike me roan! That's a tough one. I love Sundays. Waking up well rested at home with no plans sounds pretty perfect. Perhaps start the day with a nice cup of tea outside on the porch. Oooooft it's crisp and and a little cold out here but the sky is blue and the morning sun is warm. There's chimney smoke in the air and the kookaburras are having a laugh in the nearby treetops. A very relaxed morning is had. Might mow the lawns around lunchtime and then light the outdoor fire to do some cooking outside over a few cold glasses of ale. A delicious Sunday feast is had, tummies are full and then it's an evening curled up with Bertha watching a couple of Sunday night movies. Might treat myself to a bit of choccy. Sounds like a pretty perfect Sunday to me. Fuck we’re lucky to live such good lives. In the words of the great Slim Dusty, "everyday's a Sunday when you're catching barramundi." 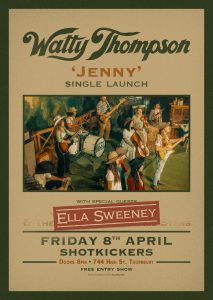 Watty Thompson and his band are launching 'Jenny' this Friday, April 8th, at Shotkickers in Thornbury, with support from Ella Sweeney.
wattythompson.bandcamp.com
@wattythompson
Header image and clip by Max Rawicz