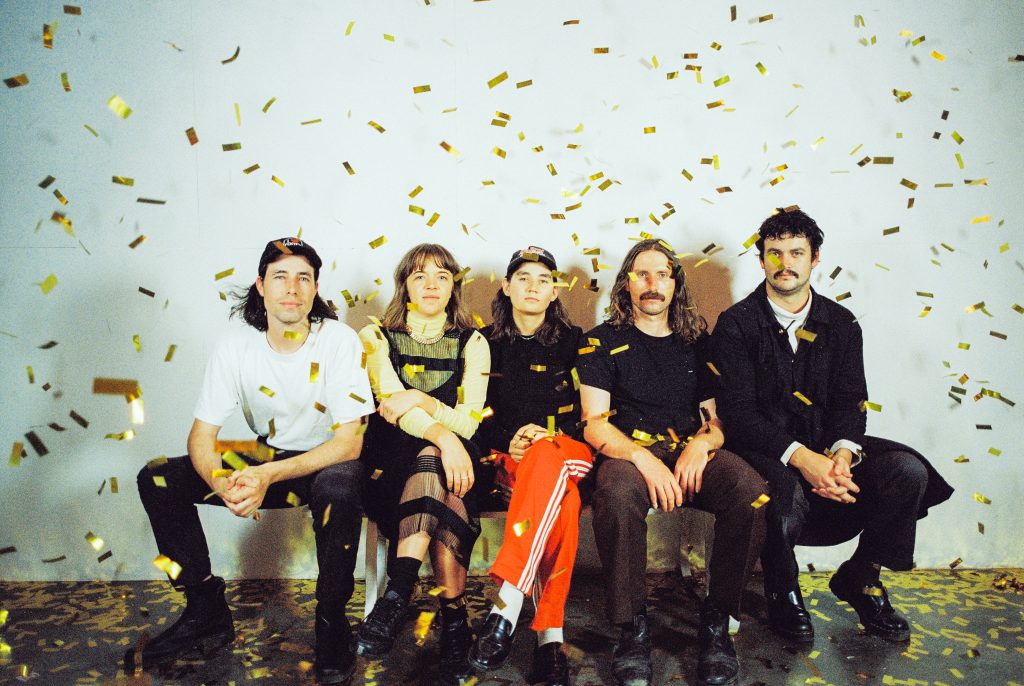 Alongside the announcement that their sophomore album With Gusto is set to be released through Flightless Records, today we have the pleasure of sharing a first look at ‘A Toast to Good Health’ from avant-pop mavericks Eggy, a dose of their surrealist garage-pop that comes paired with an equally stirring new clip.
Following on from the release of their debut album Bravo in 2020, the next phase of Eggy appears to be all the more refined and assured. Last month, we were treated to a taster of the new record with a live clip of the thrillingly chaotic ‘Magic 8 Ball’, but now with their first official single ‘A Toast to Good Health’, the band simultaneously lean into the freneticism of their previous cut while showcasing a new level of grandeur to come from their sound.

After opening with a tangle of frantic guitar leads and a racing hi-hat, ‘A Toast to Good Health’ erupts around vocalist Dominic Moore’s steady vocals, anchoring the track with a steely-eyed melody while the band pulses and contorts behind him. It’s not long before we’re thrown off course though - moments later the rug is pulled out from underneath us and the band tumble into a slowed chorus section, before once again rocketing off when we least expect it.

As we careen towards the song’s conclusion, the colourful components of ‘A Toast to Good Health’ cleverly begin to meld together, its contrasting sections blurring to leave us with a sense of vibrant warmth and charismatic poignancy. It’s a feel touched on by the band as they share “there’s a lot of sadness in this world mixed in with the good stuff. There’s no formula to feeling and ‘A Toast to Good Health’ is a reflection on the space between the multitude of emotions”.

Accompanying the single is a stunning new clip directed by Bill Irving, which leans into the glitzy and opulent aesthetic of Eggy’s latest music while pulling at the heart strings with its evocative narrative. Speaking about the clip, Bill explains ”So this clip is a smoosh of a lot of the things that Eggy's music makes me feel... happiness, sadness, nostalgia, melancholia... kinda all at once. It features an all LGBT cast at a strange imagined surburban hall style gig, coming together as a group, dancing, enjoying themselves and making themselves vulnerable, the idea is that the clip draws you in more and more, and by the end of it you actually feel a really deep connection to this gorgeously motley crew. It takes a lot to dance in front of a camera and make yourself that vulnerable, I think the clip helps us to feel that joy and vulnerability, but also the lifetime's worth of courage that informs it. I loved making this thing, and I love all the people in it, but most of all I love Eggy and I thank them for entrusting this song to me.”
‘A Toast to Good Health’ is out now, solely on YouTube. Eggy’s forthcoming album With Gusto is set to be released on July 22nd via Flightless Records - check out the track list below.