Skip to content
Music / Features
Lowlight -
A chat with Nighteyes
Words by James Lynch
Thursday 16th July, 2022
Two months on from the release of her fiery debut single ‘Lowlight’, Nighteyes has returned with an evocative new clip for the track, so we got in touch with the rising artist to find out what’s been going on.
Back in March, we had the pleasure of introducing the world to Nighteyes, the new project of Melbourne-based multi-instrumentalist Rachel Trainor, via the premiere of her explosive debut ‘Lowlight’. Instantly vivid and enthralling, at the time we remarked how its blend of “hard rock, otherworldly electronica and alluring vocal hooks” masterfully lured us deep into the “evocative universe of Nighteyes.”

This universe continues to expand open however, now with a brand new clip created by Paul Westbrook that provides the disorientating soundscape with a thrilling mystical and menacing edge. Shot in Port Gawler, South Australia, the clip pairs shots of Rachel performing alongside footage of members of The Defiant showcasing their craft, an award-winning circus show The Defiant that features female and non-binary performers. This accompaniment adds an extra level of fearlessness and rebellion to the track, its desolate backdrop and looming visuals making ‘Lowlight’ feel all the more resolute.

To celebrate the release of the clip, we caught up with Rachel to discuss the themes of ‘Lowlight’, her experiences with The Defiant and what’s up next.
TJ: Hey Nighteyes, how’s it going? We were lucky enough to get acquainted with you back when you first released ‘Lowlight’ but for those not yet up to speed, tell us about yourself?

N: Nighteyes is my newly launched (long time coming) solo project. I’m inspired by the darker side of the world, exploring the shadows within my psyche and how they are common within us all. I enjoy mixing genres and primarily am influenced by doom rock, dark pop/folk, and electronica. I released my debut single ‘Lowlight’ earlier this year and am so happy to finally have this project up and running. I’ve been writing songs for many years that didn’t quite fit into my other projects but seemed perfect for a solo project, so I’m very happy to be finally working on it!

You’ve just unveiled the stunning new clip for ‘Lowlight’ - what’s going on in the clip and how does it relate to the themes of the single?

The clip for ‘Lowlight’ features some of the circus performers from the contemporary circus show The Defiant performing acrobatic skills in a barren landscape. The Defiant features an all-female and gender-diverse cast and celebrates community, connection, and strength, themes that ‘Lowlight’ also explores. In the choruses of ‘Lowlight’, the community connection brings the listener out of the darkness of the verses and into the light. In the clip, the performers are reliant on each other to create the shapes and skills they are doing, using their strengths as a group rather than as individuals. I wanted to include the acrobatics of The Defiant for this reason, it’s pretty impossible to do these kinds of skills as individuals, so the importance of the community theme in the song is highlighted by the clip. It’s also pretty spectacular to see strong women and gender-diverse performers perform skills that are usually done by a more masculine cast.

Tell us about the team that helped put the clip together.

My friend Paul Westbrook of Late Cut Media filmed, directed, and edited the clip. What was amazing about this is that the footage of The Defiant performers was originally filmed by Paul for promotion for the show, so I’m very happy we got to use it again in my video clip. Paul and I (along with my partner Drew) went out to the same location in Port Gawler, SA, and shot the footage of me. We were very lucky we had the same weather for both shoots, The Defiant performers and myself, as The Defiant footage was shot six months before we did my parts.

Paul is also a circus performer so he knows how to capture this type of performance really well. I'm grateful to Elena Kirschbaum of Highwire Entertainment (the producer of The Defiant), who was very generous in allowing me to use the original promotional footage for The Defiant in my clip. The Defiant performers are all amazing circus performers with various skills and disciplines who have collectively performed all over the world with other circus shows. They are some of the best circus performers in the country so I’m grateful to be working with them on this project. 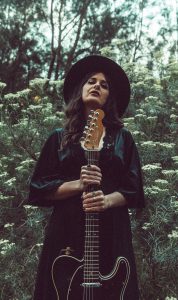 You’ve obviously spent a fair bit of time working with The Defiant team, was it a natural process seeing your two worlds collide like this? Are there more things in common between circus and music performance that we might not realise?

‘Lowlight’ actually features in The Defiant show, as I’m in the show as well as the musician and music director. A couple of my other Nighteyes songs feature in the show as well, so it was really great to have these two projects come together in a video format. In the stage show, The Defiant performers perform a ‘three high’ act with ‘Lowlight’ as a soundtrack, creating many three highs (a vertical stack with three people standing on each other’s shoulders) as the act progresses. We’ve included this at the end of the clip, which I think is a beautiful and powerful way to end the video. It's an amazing feeling to have my original music included in a professional circus show, and even better that I get to perform it live in the show.

I think what musicians and circus performers have in common is that it all takes immense amounts of dedication, practice, and passion to be able to do it professionally. It's been really interesting working in the circus scene and learning how circus performers might listen to music for their acts differently than musicians.

While you’ve got a pretty impressive list of projects to your name as it is, why was this year the right time for you to step out on your own as Nighteyes? What inspired the project?

I worked on ‘Lowlight’ and other Nighteyes songs throughout the Melbourne lockdowns and I felt like 2022 was a great time to get the first single out since it was finished. I’ve been aiming to do this project for so long that once I saw my opportunity I took it. It’s true I am involved with other time-consuming projects at the moment, but I’m hoping that I can keep up the momentum between touring with other bands to get some more recording done. Nighteyes has been a dream of mine for a long time, I remember brainstorming artist names as far back as 2012. I have always written songs so I was always wanting to get it going, and it’s these songs that didn’t quite fit into my other bands that inspired me to get out on my own.

We’ve heard rumours there’s a debut album on the way - anything you can share about that? What else is coming up for Nighteyes?

Yes, I am currently working on the debut album slowly as I find time between tours. I’m hoping that it will be finished before the end of 2022, now we are opening up again and gigs are back I find my work life as a touring musician busier than ever. So that’s definitely on the cards and I would also love to play some live gigs as Nighteyes along with a band so those are my goals for the near future!

And a classic Trouble Juice question to wrap up, what’s your perfect Sunday?

I love to spend my Sundays off spending time with my partner and our two dogs, getting a nice brunch somewhere and then spending time in nature. If it’s a cold rainy day, maybe a movie in the afternoon or I might play some music. It totally depends on my mood, I’m not really a creature of habit so every week is different for me. But as long as I get to spend time with the people and pets that I love, I’m happy.
Follow Nighteyes below to keep up to date.
nighteyesmusic.bandcamp.com
@nighteyesmusic
Photo by @rcstills