Skip to content
Music / Premieres
Premiere:
HYG - EP 2
Words by James Lynch
Thursday 8th September, 2022
Hot on the heels of their latest single, Canberra-based groovers HYG are back with new music, a collection of enigmatic psychedelia that makes up EP 2.
We’ve featured HYG a couple of times on TJ already, and as it stands, it seems like the Canberra four-piece are growing more alluring and self-assured with each new release. They’ve taken stock in their latest single ‘Into The New World’, which stretched out into an expansive six-minute psychedelic journey, as EP 2 marries this hypnotic atmosphere with an extra sheen of sophistication.

Opening track ‘Memory of Flight’ sets the tone instantly, with its swirling instrumentation, soaring hooks and irresistible groove, and ‘Whatever You Want’ slinks into focus next, its slower tempo and free-flowing performances making it feel all the more evocative in ‘Memory of Flight’s wake. On a first look, the EP might feel brief at just three songs long but closing track ‘Sunsets’ clearly highlights how much craft is going into these tracks while masterfully showcasing the scope of the band - at over seven minutes long, it’s an addictive slowburner that leaves listeners in a mesmerising haze, rounding out an EP that feels equally fitting for a headphones nerd out session as it does to soundtrack a woozy late night.

Speaking about the EP as a whole, band leader Mark Wilson shares “This is definitely the most studio-oriented release we’ve put out to date, the biggest step away from our traditional strengths as a live band. I feel as though it’s a good representation of the kind of music we’ve been making for the past couple of years, covering all bases. It was great working with Louis to bring it all together–we haven’t worked with a studio engineer in a few years, and with Louis’ guidance we were really able to bring these songs to life like nothing else. They definitely took a turn from what we had originally pictured but it’s turned out for the best - the tones and textures he’s able to bring out of our instruments really paint the picture we’ve been trying to reach for a few years now.” 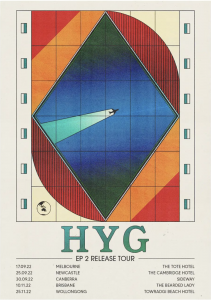 EP 2 is out everywhere today. Catch HYG on tour along the east coast of Australia over the next few month.
hygband.bandcamp.com
@hygband
Photo by Lachie Townsend
Poster by George Gillies