Skip to content
Music / Features
They Made Me Do It -
Talking Influences with INCENDIARIES
Words by James Lynch
Wednesday 2nd March, 2022
Following the release of their single ‘New Prophets’ last month, we caught up with local hip-hop duo INCENDIARIES to dig into the influences behind their debut offering of scathing rap and uneasy electronics.
Somewhere blurred between hip-hop and the grime of electronic punk, ‘New Prophets’ expands with a looming, warped groove that flickers hazily, seemingly out of reach, until MC Morgan Heenan’s sinewy rhymes move in and steal the limelight. His words, which are fuelled by fury yet delivered in an unsettling restrained way, instantly set the track in motion; each line spilling into the next for nearly six minutes, while an enthralling atmosphere builds that simultaneously feels disorienting yet completely absorbing.

Focused around society’s unhealthy obsession with money, Heenan’s lyrics are harsh and unrelenting, bringing to mind imagery of a city in ruins while he draws connections between the economy and the horrific god Molach. Speaking about the track’s context, Morgan shares “the song speaks to the idea that money, any amount, is worth more than life. Or that it's somehow realer than life, and that we need to organize ourselves, our wellbeing, around whatever is most profitable; whatever best increases GDP or creates more money for shareholders. An economy should be a way of distributing resources, of improving wellbeing. But instead of the economy serving life, we've found ourselves in this profoundly twisted system where life serves the economy, at any cost."

It’s a powerful introduction to the project and with its agitated themes and dystopia sonics leaves its mark well after its runtime is over. To pull the curtain back on ‘New Prophets’, Morgan talked us through some key influences that lie behind the track.

One of the main images in ‘New Prophets’ is that of Moloch, a questionably-historical Canaanite god which is associated with human sacrifice. In the track I use Moloch as a representation of the systems we create which demand brutal offerings with the promise of prosperity - a metaphor that's be used a few times over the years.

I think the first place I came across that ideas would've been many years ago in Allen Ginsberg's classic poem Howl. Through a sprawling, chaotic mass of images, he conjures the monstrosity created by industrial civilization, a consuming monster that is utterly inhuman, unconcerned with its subjects.

When this album dropped at the end of 2020, somewhere amongst the haze of lockdown, it immediately felt like an embodiment of the time to me. Anger, disorientation, the legacies and perpetuation of violence, all conjured through dark, hallucinatory images and hazy soundscapes. I'm continually inspired by art that names and challenges these things; Moor Mother and billy woods do it here so viscerally.

And some of the bars are really just the best. Like on ‘Rapunzal’, where woods raps:


“Alan Greenspan fucking Ayn Rand;
She came, finished him with her hand.
Lit a cigarette, they split in the dark.
Men sang from minarets, but we'd already hardened our hearts.”

If there's a better description of the relationship between individualistic self-interest and modern economics, I haven't heard it. 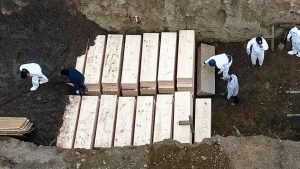 A little earlier in 2020, I remember being confronted with images from Hart Island, NYC. The photos were of plain pine caskets being stacked atop one another in rows down long ditches. Other than a name quickly scrolled on the side, they were indistinguishable. As Covid ravaged the city that year, more than 2000 people were buried in those ditches. The last surge like that was in the late 80s - when the AIDS epidemic peaked. Now, as then, the people buried in mass there are those who have no other option. Those who lived on the periphery and so too died on it. Often, what we see of the world is carefully curated to hide the human cost of the political and economic decisions of governments. Pictures like this make it impossible for me to ignore.


The news: Bezos and co.

And then there's the other side: the news that over the pandemic, the ten richest men in the world doubled their wealth, or that the number of billionaires increased significantly, or that growing wealth inequality shows no signs of slowing down. While governments and corporations dutifully sacrificed the poor as fuel to the fire, the elites profited. If Hart Island represents the sadness, this is the anger, of which there's no shortage of in the track.

This is a bit of a classic, quick and dirty text of the post-GFC years, a period in which it became clear that even the near-complete demolition of our economic system wasn't enough to shake our absolute belief in it. At its opening, Fisher presents a varying-attributed and increasingly popular quote: “it is easier to imagine the end of the world than the end of capitalism”.

This fatalism is encapsulated in Thatcher's infamous line, which becomes a kind of dark refrain in ‘New Prophets’: “there is no alternative”. Abandon all hope. We might destroy every living thing on Earth, but we can't mess with the economy. ‘New Prophets’ was about revealing that 'realism' for what it really is: violence. Only then can we begin to fight it.
'New Prophets' is out now in all the usual places.
incendiaries.bandcamp.com
@incend.iaries